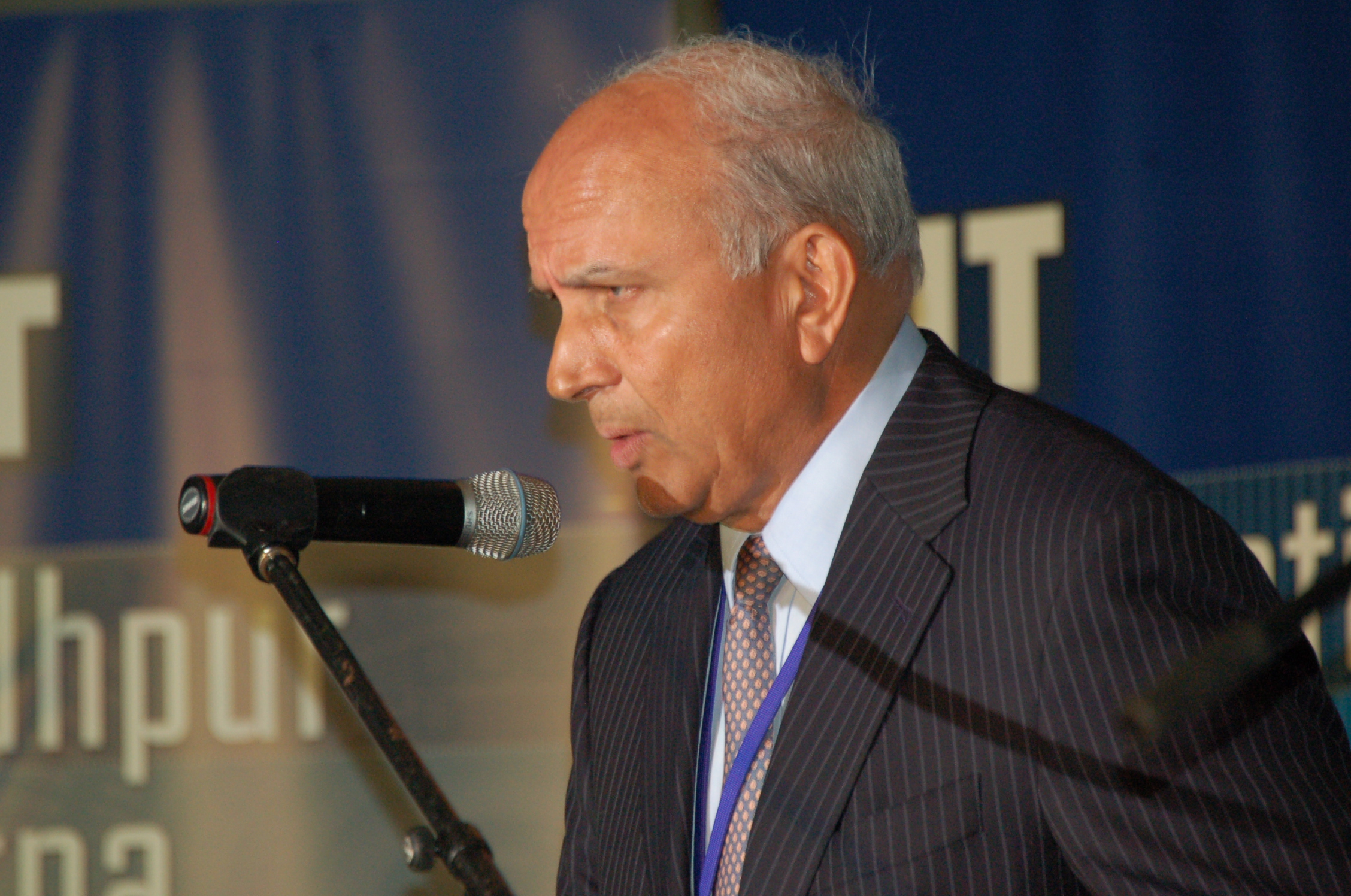 Watsa excelled in secondary school. He played field hockey, ping-pong and tennis and developed a lifelong love of chess. He enrolled in the prestigious Indian Institute of Technology Madras (IIT), graduating in 1971 with a chemical engineering degree. While attending IIT, he met Nalini Loganadhan. They married and had a son and two daughters.

Despite graduating with high grades, Watsa decided that he had no interest in becoming an engineer. He was fascinated by business. He followed his brother to London, Ontario, and enrolled at the University of Western Ontario in what would become the Richard Ivey School of Business. He had arrived in Canada with only 8 rupees in his pocket, the equivalent of about 15¢. To finance his education, he worked selling Lennox furnaces in winter and air conditioners in summer. He earned a Master of Business Administration (MBA).

In 1974, Watsa found a job in Toronto as an investment analyst with the Confederation Life Insurance Company. He learned quickly and soon became proficient as a stock portfolio manager, making profitable investments for a stable of pension fund clients (see Stock and Bond Markets). To become even more accomplished at his job, his boss gave him a book by Benjamin Graham entitled The Intelligent Investor. Watsa learned of the value of investing with one’s eye on the long term rather than trying to make a quick profit. He read about doing one’s homework before investing and believing one’s research and trusting one’s instinct rather than following what others are doing. He was so enamored with the book that his son Ben is named after its author. Watsa became vice-president of Confederation Life Investment Counsel in 1974.

In 1983, with his new enthusiasm for creating investment opportunities, he left Confederation Life to become vice-president of GW Asset Management. A year later, he left the company, and, with Tony Hamblin, founded Hamblin Watsa Investment Counsel. It quickly earned the trust of investors and made substantial profits. Three years later, Watsa purchased a struggling trucking insurance company called Markel Financial. He shed unprofitable investments, made new and shrewd investments, and, in 1987, renamed it Fairfax Financial Holdings. Fairfax is short for “fair, friendly acquisitions.”

Watsa conducted detailed research before making any investment or acquiring any company. He earned a reputation for his uncanny ability to identify and then make profitable investments in companies that others had passed over as too risky or unsalvageable. He poured money into failing companies and oversaw their growth when others would have retrenched, divided them up to be sold and laid off employees.

American billionaire investor Wilbur Ross Jr. has worked with Watsa on several deals, including Fairfax’s 2011 purchase of a 35 per cent stake in the Bank of Ireland. Ross explains that the secret to Watsa’s success is his ability to conduct fact-based macroeconomic research (see Economics) in order to see the role a company might play in a national economy and on a global scale (see International Economics). Watsa also develops unique strategies and tactics for growing a company. Finally, Ross explained, Watsa is very disciplined. He is never swayed by short-term changes or what others seem to think is best. He has the confidence to be patient and allow an investment to mature.

An example of Watsa’s strategy for building up his investments was his involvement with Canada’s Research In Motion (RIM). RIM had been at the forefront of the exploding popularity of smartphones with its BlackBerry becoming the hand-held device of choice for politicians and businesspeople around the world. However, with the arrival of Apple’s iPhone and other competitors, RIM suffered a significant loss of market share. In January 2012, Watsa joined RIM’s board of directors and led a complete revamping of the company, including a change of its name to BlackBerry Limited. In August 2013, Watsa resigned from the board to avoid a conflict of interest and then, six weeks later, paid $4.7 billion to acquire the company. Watsa made BlackBerry a private company while implementing its recovery strategy.

Despite Watsa’s stunning success and the respect he earned from investors and colleagues, he remained shy and humble. He avoided the media and seldom granted interviews. In his annual letter to shareholders, he always accepted blame for things that did not go as hoped while deflecting and sharing credit for those that exceeded expectations. For example, he accepted blame for Fairfax’s 1999 investments in two failing American insurance companies that, despite his best efforts, continued to lose money and cost Fairfax dearly. Two years later, Fairfax posted a $346 million loss, the first loss in its history. Fairfax lost money when it invested in the forest company AbitibiBowater and again with the media conglomerate CanWest Global Communications. Both went bankrupt and at a significant loss for Fairfax. Fairfax also lost $175 million on a bad investment in Torstar, which owns, among other publications, the Toronto Star. As with his winning investments, Watsa maintains perspective when he loses. He once wrote, “It is all right to fail but we should learn from our mistakes.”

Despite occasional missteps, Watsa maintained an uncanny ability to predict trends. This skill was clearly shown when, beginning in 2005, he ignored other investment firms that were rushing to purchase, package together and then resell American mortgages. Instead, he continued to manage his long-term investments while buying low-yielding but safe government bonds. In mid-2008, his wisdom was demonstrated when the American housing market collapsed, millions of mortgages became worthless, and the ripple effect sent economies around the world into a deep recession (see Recession of 2008–09 in Canada). Nearly all the world’s investment firms and banks lost enormous sums of money, with many going bankrupt as millions of people lost their retirement savings, homes and jobs. Watsa, meanwhile, purchased several investment vehicles as their prices collapsed. In 2008, Fairfax posted its best-ever annual profit: $1.47 billion.

In 2008, Fairfax’s stock was selling for $420 a share, which was about the same as better-known companies such as Apple and Google. It had become an international player with only about 30 of its employees in Toronto, about 5,000 in the United States and another 3,200 around the world. Its 2012 revenue of $8 billion made it Canada’s largest investment firm. Among the companies Fairfax either owns or owns enough shares to give it controlling interest are Sporting Life, William Ashley, and Prime Restaurants, which has many chains, including East Side Mario’s.

Fairfax also has investments and owns insurance and other companies in Canada, the United States, Great Britain, Brazil, Poland, Malaysia, Singapore, Barbados and Hong Kong. In 2014, Watsa announced that Fairfax would be sponsoring and promoting investments in companies in his native India.

In 1985, a year after it was founded, Fairfax earned a profit of $17 million. By 2014, gross annual premium earned was $10 billion. Fairfax had grown by an average of 20 per cent each year, a significant accomplishment in its industry. Still, a 2009 Toronto Life magazine article remained accurate in calling Watsa “The richest, savviest guy you’ve never heard of.”

Watsa is a member of the board of Toronto’s internationally respected Hospital for Sick Children, as well as the Richard Ivey School of Business and the Royal Ontario Museum. He is chair of the Investment Committee of St. Paul’s Anglican Church.

A supporter of education in general and universities in particular, Watsa became chancellor of the University of Waterloo in June 2009. In September 2017, he became chancellor of Huron University College in London, Ontario. Huron’s principal, Dr. Barry Craig, said, “Prem Watsa is a true leader with a heart. As chancellor, he will exemplify Huron’s commitment to ethical leadership.”

Watsa supports the Horatio Alger Association of Canada. Based on the 19th-century novels that promoted success through hard work and ethical living, it has a $10 million endowment that bestows 80 annual scholarships of $5,000 each and another 5 of $10,000 each to deserving young people. Fairfax also supports several scholarships of its own.