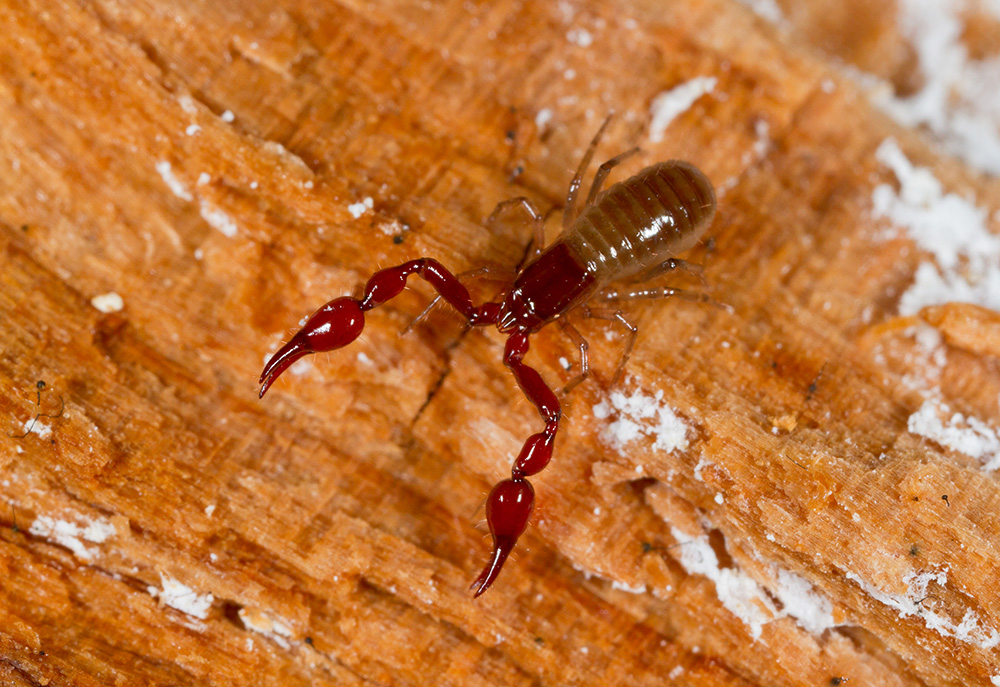 Pseudoscorpion and false-scorpion are the common names for tiny creatures in the class Arachnida, order Pseudoscorpiones (or Pseudoscorpionida). They look like miniature scorpions (to which they are related) but lack a tail or stinger.

Adult pseudoscorpions are 2-8 mm in length and their colour varies from white to deep brown. The body is flat and pear-shaped. They have 4 pairs of legs and a pair of long pedipalps - often longer than the animal itself - with pincerlike claws at the ends, which are used to capture food (small insects and mites). The tips of the pincers have openings to poison glands. They have 4, 2 or no simple eyes (ocelli) but rely more on long, sensitive hairs on their bodies and limbs to sense their environment. Silk glands in their chelicerae (jawlike structure) produce silk used to make over-wintering nests, and to transfer sperm.

Worldwide, there are about 3000 known species, with probably fewer than 50 species in Canada. They prefer dark, humid habitats such as soil and leaf litter, or under rocks and logs. Some are phoretic, meaning they hitchhike on larger arthropods (mainly beetles) or some vertebrates (eg, birds). There are several species that are almost cosmopolitan, including Chelifer cancroides, found across Canada (except for the territories).

Females are fertilized with a spermatophore (a sac of sperm), and produce 20-40 eggs, which the mother carries on her underside. When the white young emerge, they stay with the mother before dispersing. Egg to dispersal time is about 3 weeks. The young molt 3 times before becoming adults (up to 2 years), and may live another 3-4 years.