Pudlo Pudlat, graphic artist (born 4 February 1916 in Kamadjuak Camp, Baffin Island, NWT; died 28 December 1992 in Cape Dorset, NWT). One of the most original contemporary Inuit artists, Pudlo Pudlat included in his imagery icons of the modern technology that has brought such profound changes to the Canadian North. Working in a combination of acrylic wash and coloured pencils, at his death he had completed 4,500 drawings, around 200 of which had been turned into prints, and several sculptures.

Until Pudlo was six years old, he and his family lived near Coral Harbour and later moved to the Lake Harbour region, now called Kimmirut. Until he was in his 40s, he lived as a semi-nomadic hunter and fisherman, travelling along the southwest coast of Baffin Island. In the late 1950s, Pudlo moved to Kiaktuuq, near Cape Dorset, in order to recover from tuberculosis. It was there that he met James Houston, founding director of the West Baffin Eskimo Co-operative, and began making art. Encouraged by Houston and then by Houston’s successor, Terry Ryan, he started out carving, but found it difficult because of an arm injury and switched to drawing in 1959 or 1960. Eventually, Pudlo practiced printmaking, painting with acrylic paint and drawing with graphite pencils, coloured pencils and felt-tip markers. 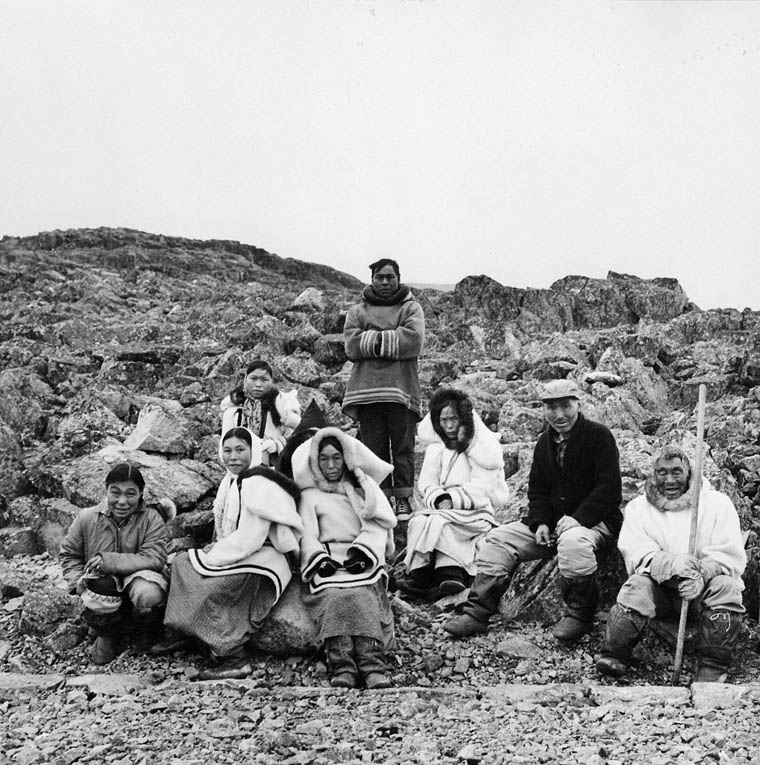 Pudlo was in a unique position to witness the transformations of traditional Inuit life in the 1950s, from a semi-nomadic lifestyle to a settled one, and also by the introduction of modern technology into the Arctic. This transformation is depicted in his art. In Pudlo’s work, airplanes, helicopters and telephone poles enter into strange interactions with the Arctic landscape and its animals. A muskox rider lassoing an airplane or a loon steering a motorboat are examples of his juxtapositions. In many ways Pudlo's work symbolizes the paradoxes of the encounter between Inuit and Western culture. In an untitled painting from the 1980s, for instance, there is a cluster of simple houses in the foreground; in the middle ground there is a telephone pole and an antenna set on immense boulders, and along the treeless horizon are two hunters dark and barely discernible, wielding spears and knives. Above it all are two jets amidst the sky and blue clouds. The painting partly illustrates a strange surrealism that occurs when the traditional lifestyle of the Inuit is set in the context of modern technologies and amenities. In the colour drawing from 1990, Old and New, hunters in canoes paddle across the water toward a gigantic goose surrounded by her goslings, a jet swooping above them. In Old and New what one most notices is not just the comically huge goose but the almost comic difference in scale between modern technologies, the natural world and human beings.

Pudlo Pudlat’s works are in the collections of most Canadian museums, including the National Gallery of Canada, and some international institutions. His art has been featured in solo exhibition across Canada, the United States and Europe. In 1990, the National Gallery of Canada organized a retrospective exhibition of his drawings, Pudlo: Thirty Years of Drawing, and mounted another major exhibition, Pudlo Pudlat: A Celebration, in 1993. In the same year, there was a solo exhibition of his work, Pudlo Pudlat: A Meeting of Cultures, at the McMichael Canadian Art Collection.