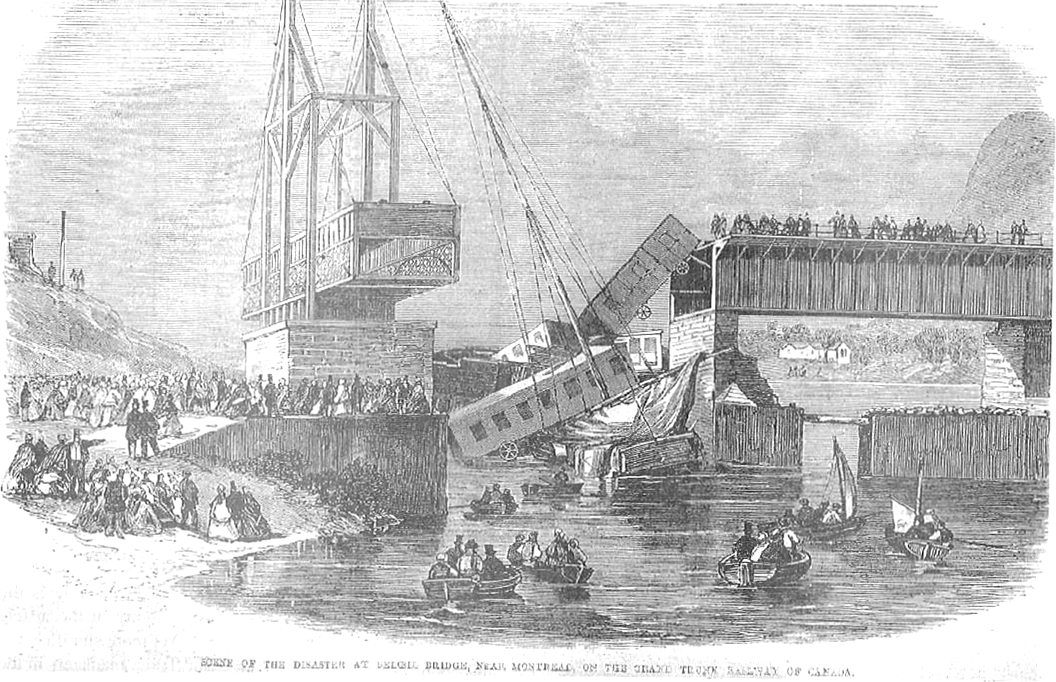 Railway accidents may result from a number of situations, including improper track beds, metal fatigue, fire, flawed rails, human error and frail bridges. Canada’s worst railway disaster occurred in 1864 in Saint-Hilaire, Québec. It is estimated that 99 people died. This article details some of the most fatal railway disasters in Canadian history, in chronological order. ( See also Bridge Disasters, Highway Disasters.)

Within a month of the opening of the Great Western Railway in 1854, six passengers were killed near London and seven near Thorold, Ontario. On 27 October 1854, at Baptiste Creek, 24 km west of Chatham, Ontario, a gravel train sent out to shore up rail beds was hit by an express that was running seven hours late. The accident killed 52 and injured 48 others, the worst rail disaster in North America at that time. However, not long thereafter, this death toll was topped when a Great Western passenger train fell through a timber suspension bridge near Hamilton, Ontario on 12 March 1857. A broken wheel axle caused the train to derail, subsequently breaking the bridge. When train fell into the Desjardin Canal below 60 people were killed.

Canada's deadliest wreck occurred at Saint-Hilaire, Québec, at 1:10 a.m. on 29 June 1864. A Grand Trunk train with 458 passengers, most of them newly arrived German and Polish immigrants, was unable to stop for an open swing bridge over the Richelieu River. The train plunged into the gap and the coaches piled on top of one another. Estimates of the deaths ran as high as 99, with another 100 injuries. Sabotage may have played a part in the wreck near Yamaska, Québec, on 28 September 1875, when a train was derailed by heavy timbers and 10 were killed. A broken rail caused the derailment of a Canadian Pacific Railway (CPR) passenger train west of Sudbury, Ontario, on 21 January 1910, killing 43.

On 27 December 1942, 36 people died when two CPR trains collided in Almonte, Ontario. One was carrying troops from the military camp in Petawawa, the other, holiday travellers. Following the disaster, the conductor of the troop train was found dead in the Rideau River of apparent suicide.

Several wrecks have resulted from crews not taking refuge to let an oncoming train pass. On 1 September 1947, 31 were killed at Dugald, Manitoba, and on 21 November 1950, 21 were killed at Canoe River, British Columbia, in crashes caused by errors of this kind. The head-on collision between a freight and a Via Rail passenger train near Hinton, Alberta (8 February 1986), which left 23 dead, was a similar case of human error negating all existing mechanical safety aids.

In terms of the number of fatalities, Canada’s fourth-largest railway disaster occurred in Lac-Mégantic in the early morning of 6 July 2013. The previous evening, a Montreal, Maine & Atlantic (MMA) train travelling from North Dakota to Saint John, New Brunswick, stopped in Nantes, Québec. The train was delivering 7.7 million litres of crude oil. Due to a combination of factors, including handbrakes that were insufficiently applied and dependence on air brakes, the unmanned train began to roll at around 1 a.m. toward Lac-Mégantic, about 12 km east of Nantes. The train derailed at the town’s centre, releasing its crude oil cargo, igniting fires and causing explosions that killed 47 people.