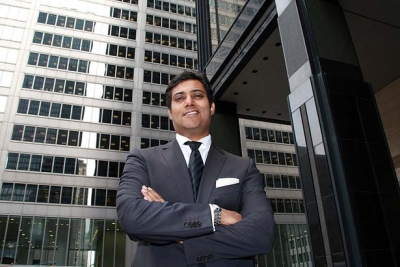 Sarkar’s family immigrated from India first to Halifax, Nova Scotia, and then moved to Toronto, Ontario in 1980 when he was just a young boy. His father was laid off during the 1982 recession and Sarkar and his sister found jobs to support the family while his mother took a job as a health care aide. His grandmother also lived with them in order to help out.

When Sarkar decided to study political science as an undergraduate, concerned relatives questioned his future employability. Nevertheless, he graduated from Queen’s University and later the London School of Economics. In the early 1990s, after graduating and feeling that there were few opportunities in Canada offering the type of global engagement he wanted, he began looking outside North America for opportunities.

He started his career as the lead strategist and consultant at European digital agency Roland Berger Strategy Consultants based in London and New Delhi. Sarkar helped establish the firm’s New Delhi office in 1997 while working with both global and Indian corporate clients. During his time in India, he also conducted a book-length study on Indian management culture, in collaboration with the Confederation of Indian Industry, by interviewing the top 50 CEOs in India.

In 2001, Sarkar co-founded Rawlings Atlantic, a strategic advisory practice, where he developed private equity and cross-border mergers and acquisitions in the clean energy sector. His investments were focused primarily in the growing Indian market.

In 2005, he co-founded Content Partners, a media promotions agency in Europe that worked with Fortune 100 clients in publishing and media branding. Sarkar stayed with the firm for three years. During this time, he also served as an investor and advisor to high growth companies and social ventures in both Europe and the United States.

Also in 2005, Sarkar started the Progressive North Forum, a symposium for academics, policy makers and journalists from the UK, Canada and the United States to share ideas on topics such as diversity and security in Western democracies.

Sarkar is a frequent pundit on issues of global business and politics. Besides being featured on the BBC and CBC, his work has also been published in the Financial Times and The Globe and Mail. He regularly speaks as a visiting lecturer at both the London School of Economics and the Cass Business School.

Some of Sarkar’s essays include “Branding Bollystan,” which dissects issues on India’s emerging cultural soft power; “Shattered Faith,” which looks at the fallout following 9/11 and “India Needs to Join the Race,” which delves into his thoughts on what India can do to become more globally competitive.

After his time in Europe and Asia, Sarkar was eventually drawn back to Canada and built a career promoting trade relations between Canada and India. He served as the president of the Canada-India Business Council, seeing the possibilities inherent in Canada’s association with India’s expanding market. He now sits on the Council’s board of directors.

Sarkar’s political career began in earnest when he was hired as special assistant in Liberal MP Derek Lee’s constituency office in Ontario’s Scarborough-Rouge River riding. In March 2011, when Lee announced that he would not run in the federal election, Sarkar was asked to replace him as the Liberal candidate. However, New Democrat Rathika Sitsabaiesan won that year’s election.

Sarkar has been married since 2003 to Reva Seth, a Canadian journalist, lawyer, author and consultant. The couple have three sons: Seth, Avery and Devan.

A version of this entry originally appeared on Historic Canada’s Asia/Canada website.