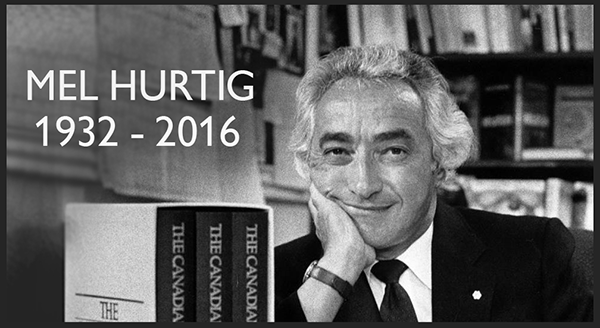 A message from Anthony Wilson-Smith, Publisher

The Canadian Encyclopedia, which Historica Canada publishes, has more than 19,000 articles exclusively devoted to life in this country. Published in both official languages, it’s believed to be the only encyclopedia of its kind in the world. The number and scope of its articles grow every day — in keeping with the country to which it is devoted. The Encyclopedia’s own history is much easier to recount. Without Mel Hurtig, who conceived of its creation and then, against long odds, made it happen, it would not exist today.

In the past year, the Encyclopedia — which has resided online since 2001 — has seen close to 10 million users and more than 43 million pageviews. Those numbers offer irrefutable evidence of the interest Canadians have in our own country, and the great accompanying appetite for accurate information. But at the time Mr. Hurtig began thinking of an encyclopedia in the early 1970s, that enthusiasm was not obvious to everyone. In his memoirs — one section of which is aptly titled The Perils of Publishing — he recalls visiting a school in Saskatchewan and finding this situation in the library: “There were very few Canadian books. All of the reference books and encyclopedias were American.… Canadian content in the three different American encyclopedias on the shelves was hopelessly inadequate…and often full of egregious errors.”

Mr. Hurtig, a longtime Edmonton resident and successful bookstore owner turned publisher, vowed to change that — and did. The scale of his vision has often been described as “the biggest publishing project in Canadian history.” The initial budget, in 1970s dollars, was almost $2.6 million. With that money, Hurtig planned to produce “one well-bound 1744-page volume, containing about three million words, with some two hundred black-and-white maps, diagrams and line drawings.” In a country where any book selling more than 5,000 copies is usually regarded within the publishing industry as a success, he planned a first printing of 100,000 copies.

He far surpassed those goals. The Alberta government, under Premier Peter Lougheed, gave him $4 million. At one point, the Encyclopedia had a full-time staff of more than 40 people spread across Canada. In addition, he assembled an all-star list of contributors that included Margaret Atwood, Peter C. Newman, Marc Laurendeau, David Suzuki and founding editor James Marsh, who oversaw the encyclopedia until his retirement in 2013. When the first edition was published in 1985, it was an immediate smash success — with an unprecedented price of $125 that some booksellers further increased to $175. Within four days, 154,000 copies of the encyclopedia were sold. Orders quickly arrived for another 40,000 copies. A second, revised, four-volume edition was released in 1988. Together, the two editions sold more than 250,000 copies. Two years later, he followed up with a Junior Encyclopedia targeted specifically at young people.

Mr. Hurtig, by his own description, cared more about the overall success of his projects than he did for accompanying financial gain. At the start of the 1990s, when Canadian book publishers faced a series of challenges, his publishing company fell on hard times. Avie Bennett, the owner of McClelland & Stewart, bought the company, including the Encyclopedia, in 1991. Eight years later, Mr. Bennett — a founder and chair of Historica — gave ownership of the Encyclopedia to our organization. Said Mr. Bennett after Mr. Hurtig’s passing: “I always admired Mel’s unselfish nationalism. I was proud to be able to make sure that his great gift to our country could be kept alive and well.”

Today, The Canadian Encyclopedia, which was redesigned in 2013 and now includes audio and video content, has 13 full-time editors. Its audience continues to grow exponentially, by as much as 700 per cent in some readership categories in the last year. Thirty years after Mr. Hurtig first realized his vision, it lives on — transformed for a new media era, but faithful to his vision. When Mr. Hurtig sold his company 25 years ago, his hometown Edmonton Journal wrote that Canada “is losing the benefactor that created The Canadian Encyclopedia and The Junior Encyclopedia…both invaluable gifts to a nation with an uncertain view of itself.” That loss has become all the more real with his passing — but thanks to Mr. Hurtig, millions of Canadians are more certain and aware of our country’s virtues and achievements. 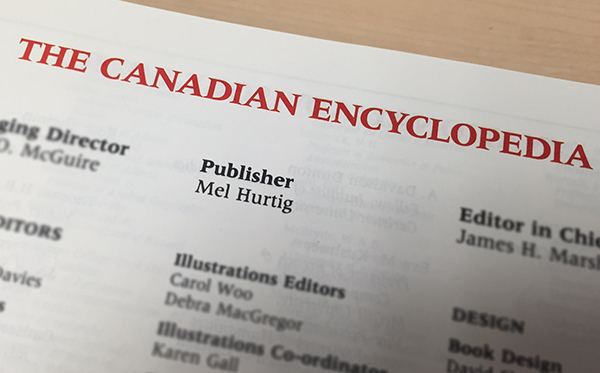 “By the time you read this, some 5,000 Canadians from across the country will have been involved in producing these volumes. The articles were written in every province and territory…It will have taken ten months to print, bind and package this reference set. As a result, some of the material, as in all encyclopedias, contains information that will have been changed by events. In the future, encyclopedias such as this will certainly continue to be available in book form, but not very many years from now The Canadian Encyclopedia should be available via electronic means as well, with immediate updates, via your television set, home computer, telephone, or perhaps video laser discs.

“It is difficult to forecast the future of The Canadian Encyclopedia. If this edition is well received and is a financial success then a second, revised, expanded and updated edition will likely be published in 1988, and we hope at regular intervals thereafter. As this is being written, work on a second edition has already commenced.

“In retrospect we can now see that the task we set out to accomplish in 1979 was immensely more difficult than we had anticipated. Perhaps, had it been somehow available, we could have spent millions of dollars more in development funds and taken several additional years for editorial preparation. However, our intent from the very beginning was to produce a first-class Canadian encyclopedia that would go on sale to the public at a low price so that all Canadian families could afford to purchase the set for their own homes. We are pleased to have achieved this goal and to have provided a valuable reference work on our country. I sincerely hope that you will be happy with Canada’s new national encyclopedia and that it will make an important contribution to Canadians’ understanding of one another and to our pride in our country.” 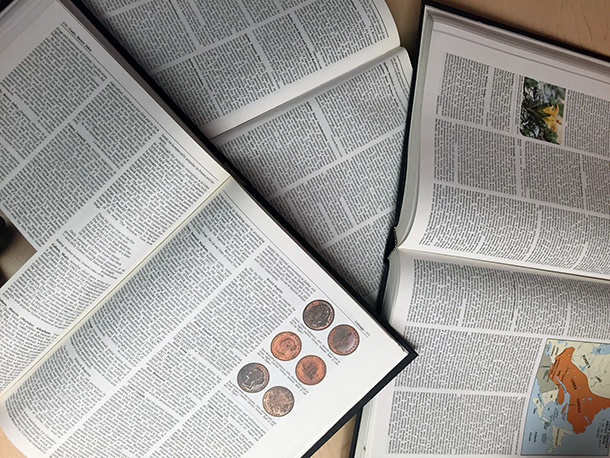 Read More from The Canadian Encyclopedia: 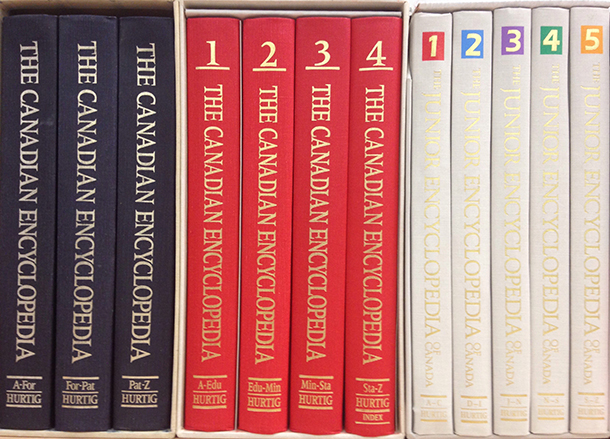 First, second, and junior editions of The Canadian Encyclopedia