Mercers fondness for his latest role is only fitting - after all, he helped create it.

This article was originally published in Maclean's Magazine on October 12, 1998

Mercers fondness for his latest role is only fitting - after all, he helped create it.This article was originally published in Maclean's Magazine on October 12, 1998 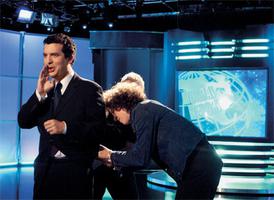 A revealing bit of trivia about Rick Mercer: when he appeared last year on the childrens television program Dudley the Dragon, he played the scheming magician Mezmra, whom Mercer affectionately describes as "the only character on Dudley never to see the error of his ways." The 28-year-old Newfoundlander, who has become a national figure thanks to his weekly appearances as a ranting reporter on This Hour Has 22 Minutes, readily acknowledges that he has a penchant for characters with a nasty, ruthless edge. In that regard, Mercer has hit a mother lode with his new CBC series, Made in Canada, which premières this week (Monday, Oct. 5, 8:30 p.m.). Mercer plays Richard Strong, a struggling script reader who will stop at nothing - including drugging his boss - to further his career at Pyramid Productions, a fictional television and film company. "Its exciting to explore a character who has no conscience," Mercer told Macleans between spoonfuls of seafood chowder at a Halifax restaurant. He said it with a smile.

Mercers fondness for his latest role is only fitting - after all, he helped create it. Co-written by Mercer and Mark Farrell (who played one of the producers on Ken Finklemans The Newsroom and is a staff writer on 22 Minutes), the six-episode Made in Canada series satirizes the very industry that made Mercer a star. Nearly everyone on the show, from the lowliest secretary to the most powerful corporate executive, is shamelessly on the make. And Mercer suggests he doesnt have to look too far afield for inspiration. "The industry is interesting in that it is filled with overblown characters," says the actor-writer, who now lives in Halifax, where both 22 Minutes and Made in Canada are shot. "It encourages eccentricity and outrageous egos."

That the sharp-tongued comedian should bite the hand that feeds him is hardly surprising. When it comes to humor, Mercer shows no mercy. His targets include self-absorbed baby boomers, superficial journalists and pompous politicians on both the left and the right. So far, most of Mercers spleen-venting has occurred in his two-minute tirades in each instalment of 22 Minutes, which began its sixth season this week. Shot in black and white as Mercer paces the gritty Halifax waterfront, gesturing towards the television camera, his rants capture the common mans rage over everything from the venality of banks ("If they could figure out a way to charge you for the pen thats chained to the counter, theyd do it") to the futility of New Years resolutions ("I will not stop drinking altogether, but I will explore light beer as a lunchtime beverage, at least for now"). A collection of these pronouncements, published earlier this year in a slim volume called Streeters, shot to near the top of best-seller lists - even though the book cost $19.95 and could be read in less than an hour.

Despite his relative youth, Mercer has, in fact, been ranting professionally for years. The third of four children raised in a middle-class home in Middle Cove, near St. Johns, Nfld., Mercer admits to a certain hamminess during his school years. He would join public speaking contests or run for student office, not out of any abiding conviction, but "for the appeal of standing up in front of the school with a microphone and saying whatever you wanted." While still in high school, he co-founded a comedy troupe, Corey and Wades Playhouse, and began playing gigs at the Longshoremans Protective Union Hall, an artists-run theatre space in St. Johns. It was there that he first worked alongside future 22 Minutes cohorts Mary Walsh and Cathy Jones, both veterans of the legendary Codco comedy group.

It was also during these early days that Mercer came to the notice of Gerald Lunz, then an Ottawa-based producer. Lunz, now creative producer of 22 Minutes and executive producer of Made in Canada, helped Mercer launch his first self-penned, one-man play, Show Me the Button, Ill Push It (Or, Charles Lynch Must Die). The work was inspired, in part, by a column the veteran Ottawa journalist had written, blasting Newfoundland premier Clyde Wellss steadfast opposition to the Meech Lake accord. Lynch contended that if it came to a choice between Quebec and Canadas youngest province, it was no contest - the Newfoundland "whiners" would have to go.

Mercer, then just 20, responded with his own brand of vitriol, railing against the central Canadian elites for their dismissive attitude towards his home province. The play premièred in 1990 at Ottawas National Arts Centre, with Lynch sitting in the second row. The scribes critique? "Once again, a Newfoundlander is telling the rest of Canada to go f- itself," Lynch told Macleans at the time. But he added that, even though Mercer has "made me the Salman Rushdie of Newfoundland, hes brilliant."

Mercers next play, Ive Killed Before: Ill Kill Again, was, if anything, an even darker comedy. Based on the premise of mainland Canadians flocking to Newfoundland after a massive nuclear accident, Mercer cast himself as the provinces hangman, working at $4.25 an hour. And because capital punishment has been decreed for such crimes as bad taste and the composition of boring kids songs, a host of cultural icons - from Farley Mowat to Sharon, Lois & Bram - faced the gallows. "The real strength here," stated a 1992 Toronto Star review, "is the declamatory writing and its delivery in the maliciously driven persona of an almost psychotic street brawler."

So, what gives? Does Mercer have to get mad before he gets funny? "I just find that when people get angry, they often say the funniest things," he says with a shrug. "So thats where a lot of good comedy comes from. Sometimes, you just have to work yourself up into a bit of a froth."

But those who have observed Mercer over the years say his comedy springs from a genuine sense of outrage. "Hes just as likely to rant at the dinner table as he is onstage," says St. Johns actor and comedian Andy Jones, a founding member of Codco. But the outrage is leavened, adds Jones, by "a deep sense of fun, which makes it palatable."

Mercers playful side is most evident when he deals with politicians. Among the most indelible Mercer moments on 22 Minutes are those in which he chowed down on Harveys french fries with Prime Minister Jean Chrétien, sat hog-tied to a chair listening to John Crosbie read from his memoirs, or fed Deborah Grey seafood from a chopstick while he was supposedly falling in love with the Reformer. It is perhaps no accident that these are all politicians Mercer professes to admire. He praises Grey for her "outrageous tenacity, even if quite often her mouth is disconnected from her brain." Fellow Newfoundlander Crosbie is "funny and, I think, honest, which is essentially what gets him in crap all the time." As for Chrétien, hes a professional politician and onetime Bay Street lawyer who succeeds by "looking like the guy who shows up to lay crushed stone on your driveway."

A longtime political junkie, Mercer admits to what he now calls a "youthful indiscretion" - joining the NDP as a teenager. "I wanted to work in a political campaign," he says, "and went with them because, essentially, theyd take anyone." His membership lapsed years ago and, since then, "Ive never joined a political party or given any of them money."

That is about as self-revelatory as Mercer gets. He will not discuss his personal life except to acknowledge that his offstage existence is fairly sedentary. A voracious reader ("everything from decent literature to trash"), he also enjoys watching television. Mercer is especially fond of such in-your-face Washington political shows as The McLaughlin Group, where, as he puts it, "you have four rabid dogs on there yelling" about the news of the week - an apt enough description, come to think of it, of 22 Minutes.

What Mercer is expansive about is his work - and right now his focus is squarely on Made in Canada. The new series - which also features Peter Keleghan, the airhead anchor from The Newsroom, as Pyramid Productions callow CEO - is a clear departure from the sketch comedy that has recently defined Mercers career. And he seems to relish the change of pace. "I was almost starved to write something longer than two minutes," he says. In fact, Mercer plans to take a three-month sabbatical from 22 Minutes after Christmas to write a new batch of Made in Canada episodes - although he insists he intends to return to 22 Minutes for future seasons.

Having achieved so much at such an early age, what does Mercer plan to do as a second act? He claims to have no idea. Film work, he says, has only marginal appeal because so few people go to see Canadian movies. "The great thing about a TV series is you make it and people watch," he notes. And though many Canadian comedians have made their mark in Hollywood, he is not eager to follow in their footsteps. Mercers is a made-in-Canada success story - and for now, at least, he is perfectly content to keep it that way.