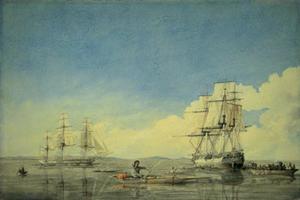 Prince of Wales and Eddystone bartering with the Inuit off the Upper Savage Islands, Hudson Strait, NWT. Watercolour by Robert Hood (courtesy Library and Archives Canada/C-40364).

Robert Hood, arctic explorer, artist (b at Portarlington, Ire 1797; d near Starvation Lk, NWT 20 Oct 1821). Hood joined the Royal Navy at age 14. In 1819 his artistic abilities gained him an appointment with the arctic land expedition led by Sir John FRANKLIN. As primary surveyor and draftsman, Hood plotted accurately from a birchbark canoe thousands of kilometres of rivers and lakes and nearly 1000 km of the northern coast of North America. He was the first to demonstrate that the Aurora Borealis (NORTHERN LIGHTS) is an electrical phenomenon, and made important observations on climatology, anthropology and natural history. Returning across the Barren Lands, already weakened by starvation and only 50 km from the previous winter's buildings, Hood was shot by Michel, a voyageur turned cannibal.