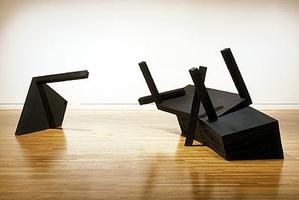 Roland Poulin, sculptor (born 17 April 1940 in St Thomas, ON). Poulin moved to Montréal as a child, and studied there at the École des beaux-arts. He has exhibited widely in Canada, notably in solo shows at the Musée d'art contemporain de Montréal in 1982-83 and the National Gallery of Canada in 1994, as well as in New York in 1981 and 1986 and Paris in 1989. In 1993 he was awarded the Prix Osias-Leduc. He lives and works near Montréal.

Poulin was strongly marked by his early experience of abstract canvases of Paul-Émile Borduas, as well as by the rigorous abstraction of the Plasticiens, particularly Guido Molinari, of the generation before him. However, he could not accept the pure abstraction Molinari aimed for, and his own work has become an increasingly ambiguous hybrid of abstract and figurative references.

Poulin's mature career can be divided into 2 main periods. Between 1978 and 1984 he created a widely admired series of low-lying abstract sculptures made of slabs of cast cement. Frequently organized around a central void, this work achieved an expressive and intellectual vigour through contrasts between the material density of the cement and the surrounding space, and through subtle irregularities in the apparently geometric configurations which gradually revealed themselves to the attentive viewer. Their meaning was given a further dimension by his exploration of archetypal forms, prompted by his reading of Carl Jung.

Since 1985, Poulin has worked in wood, creating large, fragmented sculptural masses arranged in dynamic disequilibrium. The forms, though abstract, contain increasingly insistent figurative echoes. By alluding to tombs and tables, altars and hearths in this body of work, Poulin has approached the subject of death and attempted to suggest something of its mystery. This is particularly conveyed in the ambiguity of his forms and the sombre, almost black surfaces of the sculptures. Recent sculptures have introduced references to Christian iconography, intensifying the drama between the carnal and the sacred that is at the heart of this work.