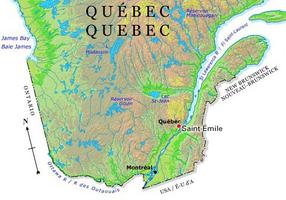 Saint-Émile began as a small village and has developed into a suburb of Québec City, situated 15 km to the south. Saint-Émile's territory is 90% residential. The shoe industry, with 5 manufacturers in the city, is Saint-Émile's main employer. The Valcartier military base is located 15 km away.