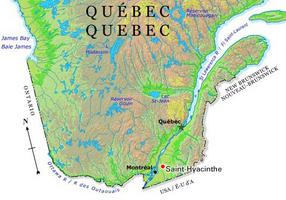 Saint-Hyacinthe, Qué, City, pop 51 616 (2006c), 50 394 (2001cA), inc 1857. Saint-Hyacinthe is situated on the St Lawrence River plain on the Yamaska River, about 60 km E of Montréal. From the beginning, St-Hyacinthe has been a commercial and service centre for a thriving agricultural region, known for its impressive religious and educational institutions.

The history of Saint-Hyacinthe began with the granting in 1748 of a seigneury which was purchased in 1753 by Hyacinthe Delorme. In 1795 the present site, farther upstream than the original settlement, became the seigneury's focal point because of the potential for hydropower of an abrupt drop in the riverhead. A village quickly developed as a market and communications centre, serving the needs of the immediate region and of the other parishes that later appeared farther upstream. A college for boys was founded in 1811; a convent for girls in 1816; a hospital in 1840.

In 1848 a railway was opened to LONGUEUIL, across from Montréal. The next year the line reached Richmond, then SHERBROOKE and Portland to the E and LÉVIS to the N, opposite QUÉBEC. But industrial development was slower than anticipated. Manufacturing did not become dominant until the 1870-1900 period, when Saint-Hyacinthe became one of Québec's main textile-production centres.

In 1831 the village had some 1100 inhabitants. By 1851 the population had reached 3113; 4% were of British origin, the highest such percentage ever recorded. With a population of 9210 in 1900, Saint-Hyacinthe was one of Québec's 6 most populous smaller centres. Development in the 20th century was slower.

Still the centre for one of Québec's thriving agricultural regions, Saint-Hyacinthe is well situated on rail and road networks. Although Montréal is far enough away to prevent Saint-Hyacinthe from becoming a suburb, its economic competition is considerable. A diversified industry, however, now has a stabilizing effect.

Cityscape
Saint-Hyacinthe is relatively flat, like the level country surrounding it. A lower town, site of the first buildings, follows the low edge of a meandering curve of the Yamaska River. The public buildings - churches, educational institutions and so on - are noteworthy, as are the parks and green spaces and some magnificent homes built at the turn of the century.

Regional market gardeners still bring their produce to market in the "lower town." In the SW are the School of Veterinary Medicine, associated with Université de Montréal, and the Institute of Agricultural Technology.