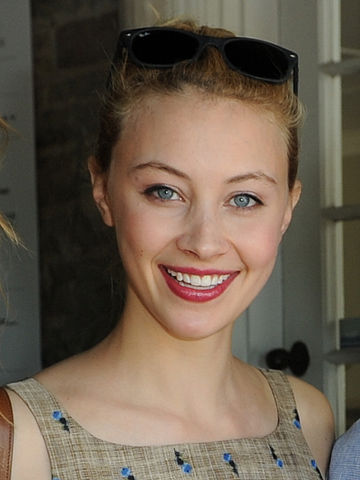 Sarah Gadon was born in North Toronto to parents Michael, a psychologist, and Linda, a teacher. Gadon’s parents raised her and her older brother, James, in a structured household that encouraged artistic expression. She attended various arts schools and enrolled in the National Ballet at age five. Ballet gave Gadon her first role: she played a lamb in The Nutcracker. She has credited the discipline of ballet for preparing her to become an actor.

Sarah Gadon landed her first acting role at age 10 on the Toronto-shot series La Femme Nikita. Her parents insisted she stay in school and take roles only during vacation. Gadon’s childhood credits include the series Twice in a Lifetime, Redwall, Mutant X and Are You Afraid of the Dark? (which also helped launch the careers of Ryan Gosling and Scott Speedman).

After graduating from high school, Gadon briefly attended Queen’s University in Kingston before returning to Toronto. She took film studies part-time at the University of Toronto while pursuing acting. Being based in Toronto gave Gadon the opportunity to work in Canadian films (e.g., Siblings; Leslie, My Name is Evil), Canadian television series (e.g., This Is Wonderland; Flashpoint; The Border; Being Erica; Happy Town; Murdoch Mysteries) and locally shot American productions (e.g., Charlie Bartlett; The Cutting Edge 3: Chasing the Dream).

Gadon gained attention in 2011 when she appeared in several high-profile productions. She had a small part in the Toronto-shot horror film Dream House, starring Daniel Craig, Rachel Weisz and Naomi Watts, and had a notable role in Mary Harron’s boarding school horror drama The Moth Diaries.

Sarah Gadon’s third 2011 project marked her first collaboration with director David Cronenberg. In A Dangerous Method, Gadon plays Emma Jung, wife to psychologist Carl Jung (Michael Fassbender). Gadon mastered an English accent and drew upon her ongoing studies in film theory for the part. That same year, she participated in the Toronto International Film Festival’s Rising Stars program and was named a star to watch by Playback Magazine.

Her performance in A Dangerous Method impressed Cronenberg so much that he cast her in Cosmopolis (2012) as the wife of a cyber-capitalist playboy (Robert Pattinson). Gadon researched socialites from bygone eras to perfect her character’s poise and affectations. Her cool-as-ice performance complemented Cronenberg’s detached direction. Gadon gained extra attention when Cosmopolis premiered at the Cannes Film Festival alongside Antiviral, the feature directorial debut of Cronenberg’s son, Brandon. Although initially reluctant to play Antiviral’s bombshell starlet Hannah Geist, Gadon responded to Brandon Cronenberg’s interpretation of the character as a critique of the way society fetishizes female celebrities.

Gadon reunited with David Cronenberg for Maps to the Stars (2014), a sinister and funny portrait of Hollywood excess. She offered a risqué performance as the dead mother of Julianne Moore’s floundering actress, who haunts her daughter and fuels her insecurities. Grantland called her performance “surreal” and “terrifying, but in an elegant way.”

Gadon often collaborates with Cronenberg’s daughter Caitlin, a photographer; Gadon directed a 2015 episode of the documentary series Reelside about their work together. In 2017, Gadon credited David Cronenberg with changing her life.

In 2013, Gadon appeared in Denis Villeneuve’s psychological mind-bender, Enemy. Cast opposite Jake Gyllenhaal, Gadon delivered a dark and nuanced performance playing a woman seduced by her husband’s doppelgänger and the prospect of another life. Gadon suggested wearing a weighted belly to slow her movements and add realism to her character’s pregnancy. Her performance won a Canadian Screen Award, and the Los Angeles Times noted her work as a highlight of the film.

Also in 2013, Gadon appeared in Amma Assante’s socially conscious costume drama, Belle. Hollywood came calling, and Gadon screen-tested for the lead in Snow White and the Huntsman, although the role went to Kristen Stewart. Gadon appeared in two major 2014 Hollywood productions, a supporting role in The Amazing Spider-Man 2 and the female lead in Dracula Untold, an experience she called “a big departure and deeply underwhelming.” She followed those films with the international coproduction The Girl King; the lead role in A Royal Night Out, a largely fictionalized account of Princess Elizabeth’s wartime efforts; and the Hulu series 11.22.63, about the assassination of John F. Kennedy. She also participated in CBC’s 2014 Canada Reads debate, defending Kathleen Winter’s novel Anabel.

Gadon flexed her dramatic chops in Indignation (2016), the feature directorial debut of screenwriter and film executive James Schamus (The Ice Storm; Crouching Tiger, Hidden Dragon). Her performance as Olivia, a sexually frank and psychologically complex coed, drew rave reviews. Stephen Holden of the New York Times wrote, “In Ms. Gadon’s sensitive performance, you can feel the vulnerability just beneath the surface of her apparent poise.” Recognizing her potential, Schamus encouraged Gadon to pursue strong roles, rather than parts with auteur directors.

To emphasize Grace’s ambiguity, Harron had Gadon play key scenes in three different personas, which were edited together. The Guardian’s Lucy Mangan called her work “powerful and subtle,” while the New York Times’ James Poniewozik deemed her “mesmerizing.” She received a Canadian Screen Award for her enigmatic performance.

Gadon followed Alias Grace with film roles in Xavier Dolan’s English-language debut, The Death and Life of John F. Donovan (2019); Sook-Yin Lee’s gender-bender Octavio Is Dead! (2018); Maxime Giroux’s moody drama Le grand noirceur (2018); and Vampires vs. the Bronx (2019), produced by Saturday Night Live’s Lorne Michaels. She also had recurring roles in the TV series Letterkenny and Total Drama, and a supporting role in an episode of HBO’s True Detective.  In 2018, Gadon marked her debut as a producer while starring in the short Paseo.

Gadon had a brush with the tabloids in 2012 when outlets incorrectly linked her with her Cosmopolis and Maps to the Stars costar Robert Pattinson. Gadon has been in a relationship with film editor and director Matthew Hannam since they met while working on Antiviral. The pair also worked together on Enemy and the short Paseo.

Gadon serves as a brand ambassador for Giorgio Armani cosmetics and Jaeger-LeCoultre watches. Despite her fame, Gadon is a reluctant star. She calls herself a “normie” and prefers to be seen as an artist rather than as a celebrity. She remains in Toronto and is an advocate for the inclusion of Canadian crews in foreign productions shot in Canada. She has also advocated for actors’ rights in digital works.

Gadon is pragmatic about working in Canada and pursues challenging roles regardless of where they are. “One thing about making movies in Canada is that there’s a scarcity of work,” she said in an interview at TIFF 2018. “There just isn’t the same volume of production as there is in the US. The climate of filmmaking is such that, if you want to keep working, you have to propel your own vision, propel your career, and propel your own work. That often leads you into doing different things within the industry.”