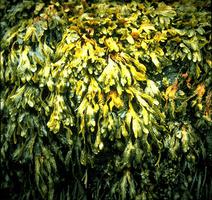 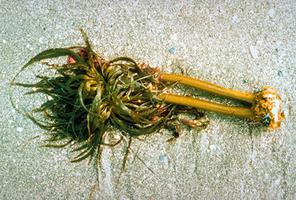 Seaweeds are multicellular marine algae, visible to the naked eye. They extend from the uppermost reaches of sea spray on the shore to the lower limits of light beneath the surface of the water. They fringe all ocean coastlines, with few species found below 30-40 m depth. Seaweeds are most abundant in lower intertidal and shallower subtidal zones. Some are small filaments, barely visible; others are large and complex in structure. There are reports of giant kelp (Macrocystis) attaining 100 m in length, and single plants of bull kelp (Durvillaea, genus of Southern Hemisphere) weighing more than 100 kg. Seaweeds, as algae, are classified as "greens," "browns" and "reds." Most seaweeds belong to the red or brown algae, most green algae occurring as planktonic or freshwater forms (see plankton). Many species of seaweeds occur along Canadian coasts: about 175 are reported for the Arctic; 350 in the Atlantic; nearly 500 in the Pacific.

The use of seaweed as food is largely restricted to the Orient. The Japanese include many species in their diet, the most noteworthy being nori (Porphyra), which is "farmed," the annual crop valued at about $1 billion. The Chinese still consume kelp (Laminaria) to prevent goitre. In the West, only purple laver (Porphyra), Irish moss (Chondrus crispus) and dulse (Palmaria palmata) are eaten routinely, the latter 2 in Atlantic Canada. Seaweeds are included in animal rations and used as soil conditioners and fertilizers. Hydrocolloids (water-soluble gums) are employed in industry, particularly food and textile sectors. These include agar and carrageenin from "reds" and algin from "browns." Irish moss is harvested in the Maritime provinces and exported for processing of carrageenin. In Nova Scotia, knotted wrack (Ascophyllum nodosun) is harvested for alginate. Seaweeds are little used in BC. Some species, especially "reds," are beautiful and have been collected and mounted.