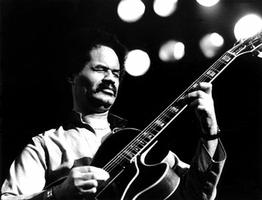 Jazz guitarist Sonny Greenwich (photo by Mark Miller).
Sonny (b Herbert Lawrence) Greenwich (b Greenidge). Guitarist, composer, b Hamilton, Ont, 1 Jan 1936. His father, Herb Greenidge, was a jazz pianist in Hamilton until the early 1940s, then took his family to Toronto, where he retired from music. Greenwich, who also pursued an early career as a boxer, began playing guitar in his late teens, and at about 22 joined an R&B band led by the pianist Connie (Conrad) Maynard. Influenced by the tenor saxophonist Sonny Rollins, Greenwich developed a unique style, with an emphasis on long phrases of single notes rather than a more harmonic approach. The saxophonist John Coltrane, the trumpeter Miles Davis, and the pianist Bill Evans were other early influences. In later years, his influences expanded beyond jazz to include the classical composers Maurice Ravel, Claude Debussy, and Paul Hindemith. It is reflective of Greenwich's open-minded approach to music and strikingly personal style that he also based guitar solos on the work of visual artists such as the cubist Paul Klee, and on natural elements such as birdsong.

Turning exclusively to jazz by 1960, Greenwich appeared at such Toronto venues as The Cellar, The First Floor Club, and The Bohemian Embassy with his own bands, and also performed locally with the tenor saxophonist Don William (D.T.) Thompson and others. After playing in the USA 1966-7 with the US saxophonist John Handy, in the company of the bassist Don (Winston) Thompson and the drummer Terry Clarke, he settled in Boucherville, near Montreal. Greenwich appeared at the Village Vanguard in New York for a week in 1968, leading a quartet completed by US musicians.

Greenwich's career thereafter was interrupted by other interests (including the pursuit of a personal religion similar to pantheism), US immigration concerns, and by poor health related to a childhood head injury and recurring lung problems. Although he was invited to join Miles Davis' band after a week's audition at Toronto's Colonial Tavern in 1969, he was unable to secure the necessary documentation to work in the USA. His performance record was spotty during the 1970s, 1980s, and 1990s as he made occasional appearances in concerts and clubs in Montreal, Toronto, Quebec City, and Ottawa. He appeared at the FIJM several times and in 1987 performed at the New York club Sweet Basil, an event which was preserved on a recording for the Justin Time label, Live at Sweet Basil.

Long known more by reputation than through personal exposure outside Canada, Greenwich reached a greater number of listeners from 1990 on. He formed his own label, Kleo, and released three recordings, Standard Idioms (1992), Hymn to the Earth (1994), and Spirit in the Air (1995), before returning to Justin Time for Welcome Mother Earth (1995), recorded with his son, the guitarist Sonny Greenwich Jr, The Kenny Wheeler and Sonny Greenwich Quintet at the Montreal Bistro (1997), and a set of duets recorded with the pianist Paul Bley. In 2000 Sackville Records released a set of 1979 duets with the guitarist Ed Bickert, and in 2001 Cornerstone Records released Fragments of a Memory, a session originally recorded for the CBC radio program "Jazz Beat." In addition, Greenwich's 1967 recordings with the tenor saxophonist Hank Mobley were reissued internationally by Blue Note Records.

As a result of his heightened profile in the 1990s and 2000s, Greenwich was the recipient of numerous awards and honours, including several Jazz Report Awards for best Canadian guitarist.