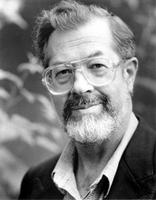 Glick's popular music is direct and emotional in its appeal. The music is an excerpt from his Sing Unto the Lord a New Song, performed by the Elmer Iseler Singers (courtesy CBC).

Srul Irving (b Israel) Glick. Composer, radio producer, conductor, teacher, b Toronto 8 Sep 1934, d Toronto 17 Apr 2002; B MUS (Toronto) 1955, M MUS (Toronto), honorary FRCCO (1993). His father, David (b Kishinev, Russia, 15 Apr 1898, d Toronto 29 Jan 1991), emigrated to Canada and settled in Toronto in 1924 and was a cantor in several of that city's synagogues; his brother Norman (b Toronto 1 Jan 1928) has been active as a professional clarinetist. Both the cantorial music of his father and the classical repertoire played by his brother had a significant influence on Glick's later development as a composer. Glick studied composition at the University of Toronto, for two summers in the 1950s with Milhaud in Aspen, and 1959-60 with Louis Saguer and Max Deutsch in Paris. From 1962 to 1986 he was a CBC radio music producer, responsible for the premieres of many Canadian compositions on such programs as 'Music Alive,' 'Themes and Variations,' 'CBC Tuesday Night,' and 'Music Toronto.' He was the producer for over 150 CBC recordings, including a Juno Award winner and several which received the Canadian Music Council's Grand prix du disque. Glick taught theory and composition 1963-9 at the RCMT, and 1985-6 at York University. In 1969 he became conductor of the choir at Beth Tikvah Synagogue, Toronto (which recorded the privately distributed LP Music from the Jewish Liturgy); in 1978 he became the choir's composer-in-residence. He wrote liturgical music and Yiddish folk song arrangements for the choir and toured with it in Canada, Israel, and the USA. He also conducted the Chamber Players of Toronto for a recording of his Suite Hebraïque No. 2 and Gathering In.

Glick received his first commission in 1964; virtually all of his works were written on commission. He wrote Visions Through Darkness for the Elora Festival, Northern Sketches for Festival of the Sound, Psalm for Orchestra and Sonata for Orchestra for the Hamilton Philharmonic, Fantasy for the 1987 Montreal International Competition, String Quartet No. 1 for the Orford String Quartet, The Hour Has Come and Songs of Creation for the Toronto Mendelssohn Choir, and The Reawakening for the TS. The CBC commissioned Glick to write ... i never saw another butterfly... for Maureen Forrester, Divertimento for the Thirteen Strings, Canticle of Peace for the Vancouver Chamber Choir, and Four Songs for Tenor and Orchestra for Jon Vickers. Glick has also written works for the Atlantic Symphony Orchestra, Paul Brodie, Camerata, the Canadian Piano Trio, Daniel Domb, the Elmer Iseler Singers, Rivka Golani, Ofra Harnoy, the Kingston Symphony, the McGill Chamber Orchestra, the Oriana Singers (Toronto), Suzanne Shulman, the Toronto Children's Chorus, the Victoria Symphony Orchestra, and others. He also received US commissions, eg, from the Adath Jeshurun Synagogue Choir.

In his works of the 1960s Glick united lyricism with thick, polytonal textures, at times employing jazz idioms. From that point, most of his works incorporated Jewish subjects or folk materials. The song cycle ... i never saw another butterfly ... sets poems by Jewish children, many of whom died in the Terezin concentration camp during World War II. Heritage, commissioned by the New Dance Group of Canada in Toronto, is a ballet about the hardships of a Jewish immigrant family. In the early 1970s Glick experimented with a more contemporary language, employing note clusters, for example, but without discarding the emotional lyricism of his earlier works. In his later works he has achieved a synthesis of Jewish and classical musical traditions, creating from these two strains a personal idiom that is lyrical and direct in its emotional appeal. He composed almost 200 liturgical works, and was particularly known for his choral writing.

In 1989 RCI released a four-CD compilation of Glick's music (4-ACM 34). His works have been recorded by the Vancouver Chamber Choir, the Elmer Iseler Singers, the Toronto Children's Chorus, Jon Vickers, and the Orford String Quartet. Toronto radio station CJRT broadcast a week-long examination of Glick's music in 1991. Glick continued active as a composer, lecturer, and conductor of his compositions until 2002. He was composer-in-residence at the Boris Brott Spring and Summer Festival in 1999; and was program director for two concert series, Jewish Music Toronto and Musica Beth Tikvah. Increasingly, his works have been heard in the USA (eg, at Kent State University and Minneapolis), and abroad, including Germany (Bonn 1999) and Australia (the Toronto Children's Chorus, Sydney 1999).

Glick was president 1966-9 of the CLComp and an associate of the Canadian Music Centre. For his contributions to Jewish music Glick received the J.I. Segal Award in 1972, the Kavod Award in 1982, and again in 2001, the Solomon Schechter International Award in 1985 and again in 1995, and the Yuvel Award in 2000. He received the Governor General's medal in 1993 and was appointed a Member of the Order of Canada the following year. He deposited his papers with the University of Calgary.

Glick was married to the pianist Dorothy Sandler Glick, and later to Sara Wunch.

The Reawakening: A Symphonic Poem for Orchestra. 1991. Ms

Seven Preludes and Ballade (1959). Both manuscript

The Flame is Not Extinguished (Glick, based on Exodus), oratorio. 1990. Ten, mezzo, female chorus, piano. Ms

Also over 100 pieces for SATB for use in the Synagogue. Ms. Some works recorded by Beth Tikvah Choir (Toronto)