In 1855, François Baby, a Canadian businessman and shipowner, commissioned the construction of two ships from Robert Napier and Sons of Govan on the River Clyde in Scotland. Taking a culturally balanced approach, Baby named them the SS Napoleon III and the SS Queen Victoria.

Identical twins, these iron ships were highly advanced in design for that era. Powered by steam and sail, they measured 173 feet in length. Both were launched in 1856 and joined the Baby fleet that year in British North America. They were engaged under contract to the colonial government of the Province of Canada, in such duties as the maintenance of navigational buoys, tugging service and the supply of lighthouses. As a result of financial problems, ownership of both ships and the rest of the Baby fleet was transferred in 1860 to the government.

Based in Québec City, the Queen Victoria continued her duties as a Canadian Government Steamship. She had the honour of carrying the Prince of Wales during his 1860 visit to Canada, and was also used occasionally by the governor general of the day. In 1864, the ship was plucked from her day-to-day chores and chosen to play a significant role in what became Confederation.

In 1864, the political leadership in the Maritime colonies — New Brunswick, Nova Scotia and Prince Edward Island — decided to meet in Charlottetown that September to discuss possible Maritime union. Learning of this, the political leaders of the Province of Canada (later to become Québec and Ontario) determined to join their Maritime counterparts in Charlottetown. Even though they had not been invited, the Canadians hoped to persuade the Maritime leaders to widen their agenda to include the potential union of all the British North American colonies.

The unofficial and uninvited Canadian delegation set sail from Québec City for Charlottetown, mooring in the harbour there on 1 September 1864. The ship that carried them was the Queen Victoria.

The arrival of the Canadians coincided with a much-anticipated circus coming to Charlottetown, and the local hotels and inns were filled to capacity with eager circus-goers from across the Island. While a few of the Canadian visitors found lodging ashore, most remained aboard the Queen Victoria, which served as their floating hotel for the duration of the discussions.

With so much excitement about the circus being in town, the arrival of the Canadians went virtually unremarked. However, PEI's top-hatted colonial secretary, William Henry Pope, rowed out to greet them in a borrowed, flat-bottomed boat that reportedly also had barrels of flour and molasses aboard. The Canadians were later rowed ashore in the ship’s boats by the uniformed crew of the Queen Victoria, and given a more fitting and formal greeting. 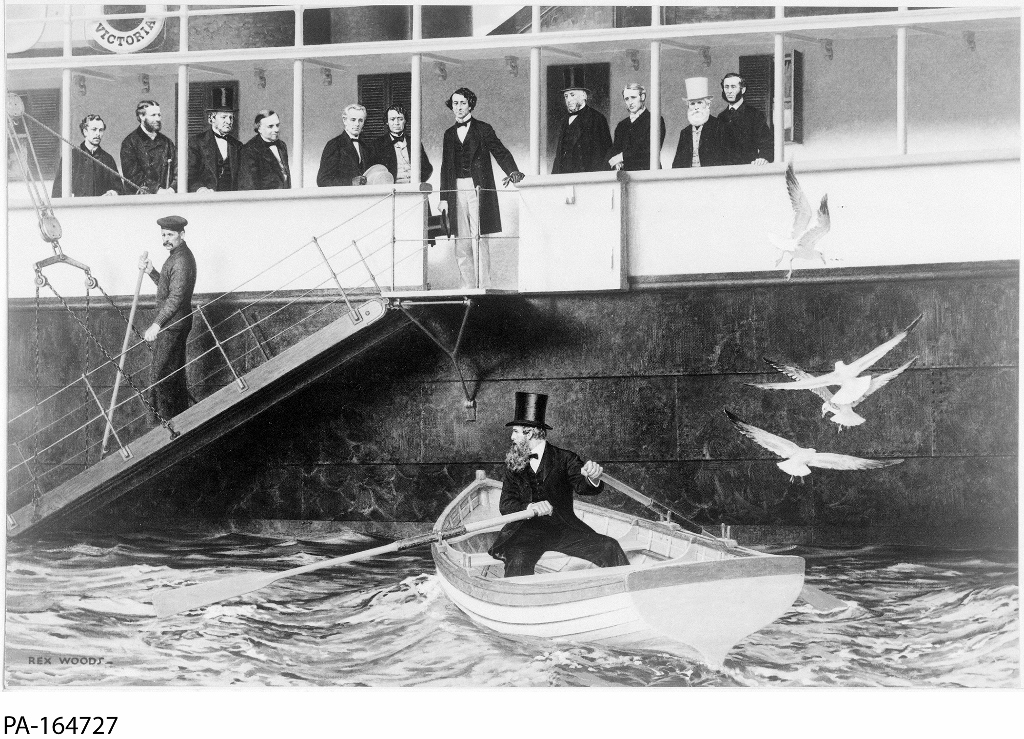 A painting by Rex Woods of W.H. Pope rowing out to greet the Canadian delegation on the S.S. Queen Victoria, at the start of the Charlottetown Conference in 1864. 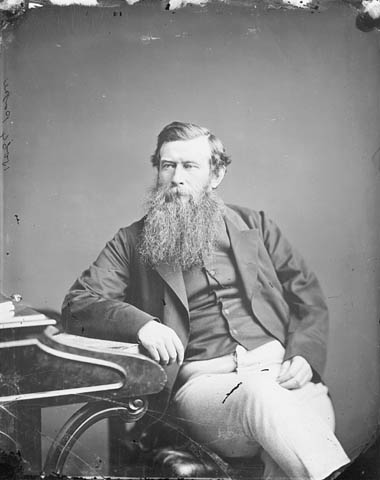 The Canadian representatives were welcomed by the Maritime leaders, and it was soon agreed that the original agenda for the conference would be expanded to embrace the possible union of all the British North American colonies. Discussions began in earnest, went superbly well, and, after two days of promising meetings, the Canadians hosted a luncheon for all delegates aboard the Queen Victoria in the afternoon of 3 September.

Excitement grew over the course of the champagne luncheon, and animated talk continued at a dinner on shore, late into the evening. A sense of great moment and common purpose became felt by those gathered aboard the ship. At one point, one of the participants declared the “banns of matrimony” to have been read and the colonies “affianced,” or engaged to be married.

Historians point to this pleasant gathering as the turning point in the Charlottetown discussions. Francis Bolger observed that “… sufficient unity pervaded the meeting to permit an unofficial proclamation of a new nation.” Another historian, Peter Waite, wrote that this pivotal luncheon was “… in a significant sense, the beginning of Confederation.”

The Charlottetown Conference, as it came to be known, continued for another week or so, and these productive sessions were accompanied by more social events, including a lunch aboard the Queen Victoria for five women, four of them wives of the PEI delegates. When the Charlottetown discussions drew to a close, the Queen Victoria ferried delegates to Halifax for further talks, then to Saint John, and finally back to Québec City for the second founding constitutional conference.

What is now known as the Québec Conference began on 10 October. The general agreements reached in Charlottetown were hammered out in greater detail and given firmer shape. The informal announcement of the engagement of the colonies, first made aboard the Queen Victoria, was reaffirmed during the Québec talks, and the British North American colonies were on their way to forming Confederation.

Unfortunately, the Queen Victoria did not survive to see the union become a reality on 1 July 1867.

Nine months earlier, chartered out by the government, she was on a run back from Cuba with at least 30 crew and passengers and a cargo of fruit, cigars, tobacco and rum, when she encountered a hurricane off Cape Hatteras, North Carolina. Badly battered for two days, the ship eventually began taking on water faster than the crew could pump. On 4 October 1866, at a reported latitude of 33 degrees 3 minutes north and longitude 76 degrees 30 minutes west, the SS Queen Victoria slipped forever beneath the waves.

Two of the ship’s crew perished, but an American brig rescued the remaining crew and passengers. The grateful survivors presented the American skipper with the bell of the Queen Victoria — which is to be found to this day in Prospect Harbor (now Gouldsboro), Maine, the rescuing captain’s hometown. The bell and a silver tea set — also acquired by the American captain, and now in the Maritime Museum of the Atlantic in Halifax — are the only known artifacts left from the Queen Victoria.

Attempts were made unsuccessfully over the years to repatriate the bell to Canada, but the townspeople of Gouldsboro were unwilling to let it go. Eventually, in recognition of the bell’s importance to Canada, the town generously commissioned an exact replica that was presented by the Gouldsboro mayor to the mayor of Charlottetown, where it is on public display.

No attempt has so far been made to locate the wreck of the Queen Victoria, the lost ship of Confederation.

With her sister ship gone, the Napoleon III continued to carry out her duties for another quarter century. In 1890, she was stranded in a gale at the entrance to Little Glace Bay, Nova Scotia, and had to be written off.