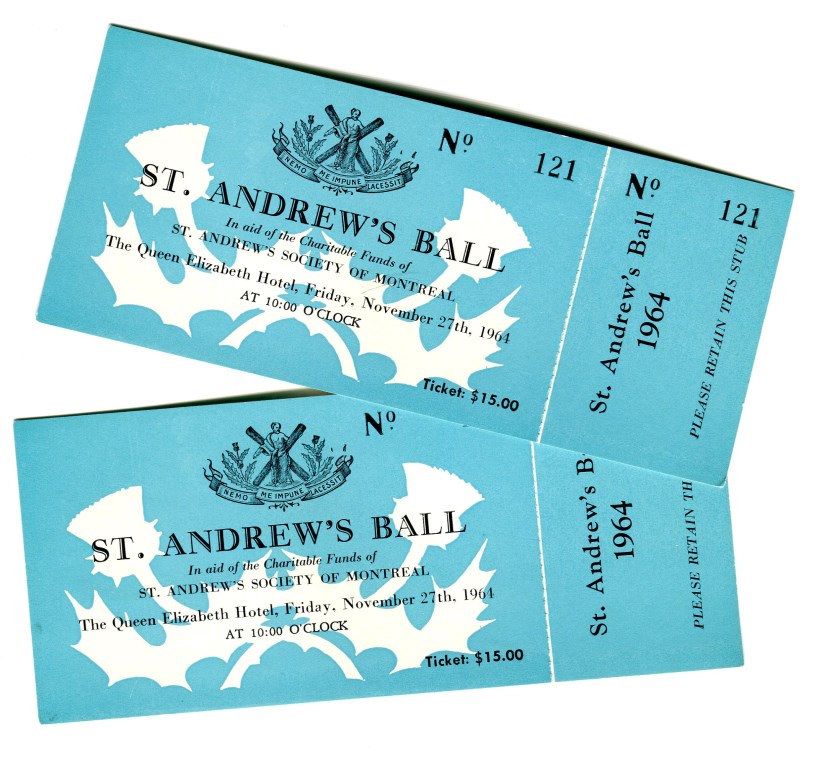 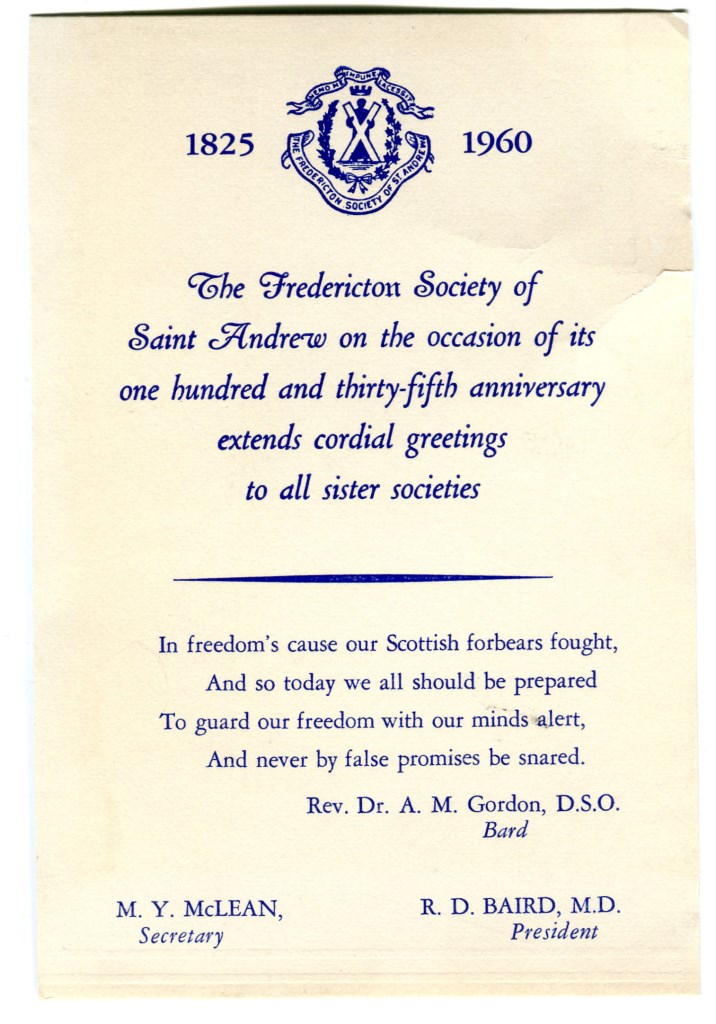 Greetings from the Fredericton Society of S. Andrew to the St. Andrew's Society of Montreal, 1960. 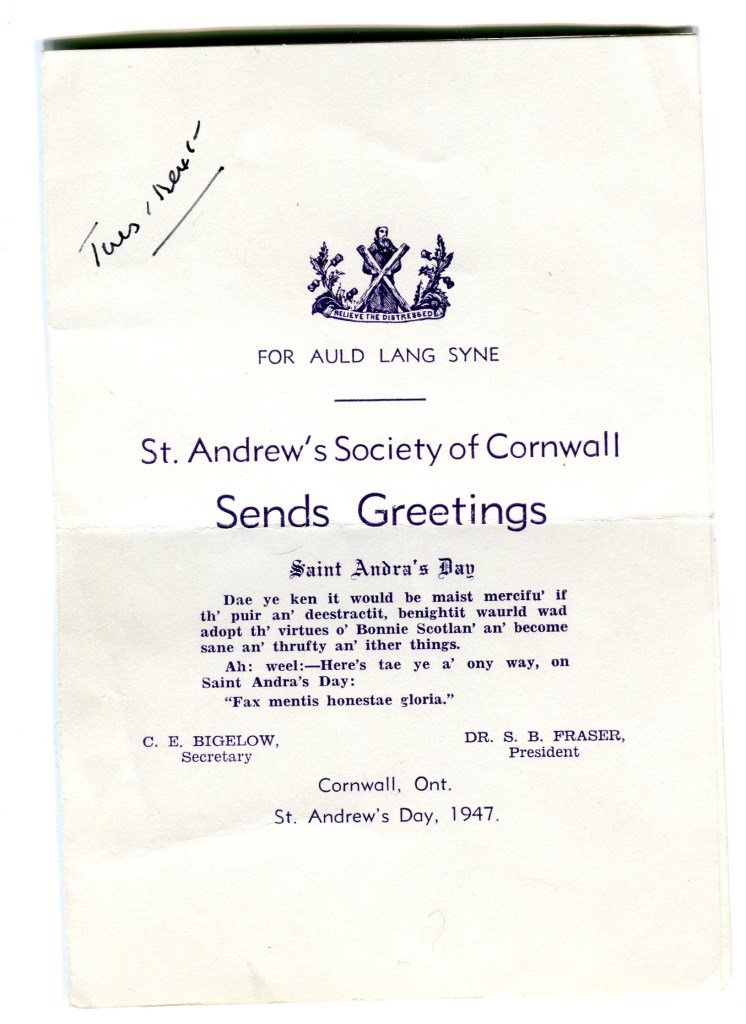 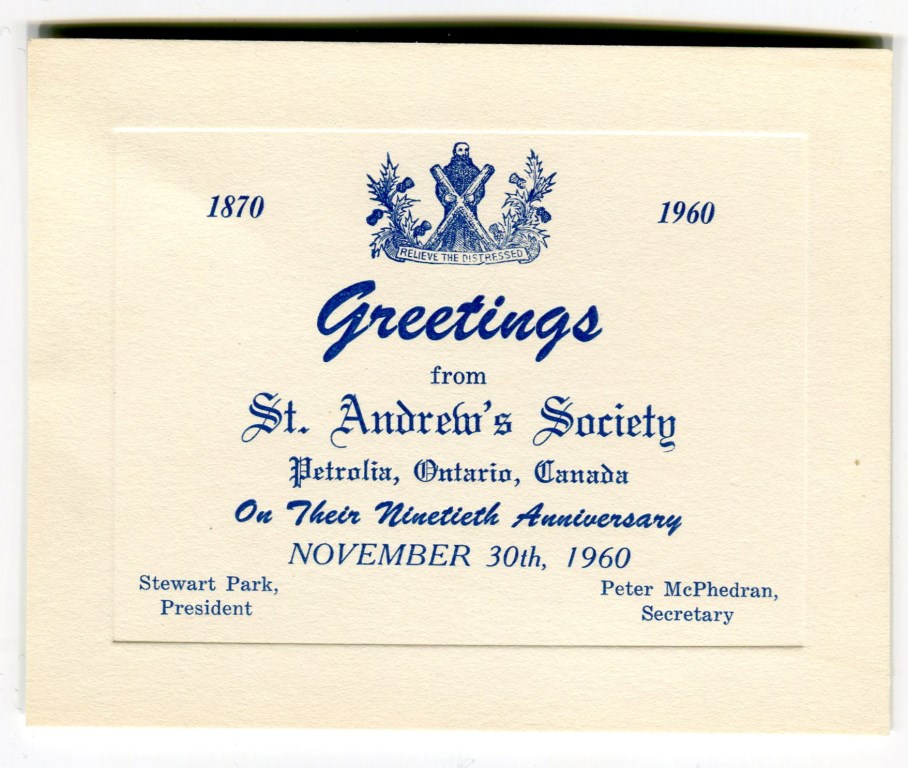 Most communities in British North America that had Scottish residents had celebrations in honour of the patron saint many years prior to the formal organization of any type of Scottish-specific society. Dinners such as the one held in Saint John, New Brunswick, in 1795, or in Montréal in 1816, in honour of the saint followed a similar pattern. The men (in the 18th and 19th century, these were all-male attended events) who belonged to the city’s business and political elite, gathered together at a local inn, hotel or club and dined on traditional fare, often including haggis, and drank copious amounts of wine and whisky. After the meal, those assembled would go through a series of toasts in honour of the day, their leaders, the royal family, Scotland, and other assorted people and institutions that were important to the people present, and to the contemporary political climate. There was also a series of songs which were sung between toasts, and music played by a band or a bagpipe. The dinners served as both a social occasion and a way to reinforce their identity as Scots.

The first St. Andrew’s Society in Canada was formed in 1798 in Saint John, New Brunswick, and was organized as a box or mutual benefit society. The society provided benefits for its members in times of illness, and was also active in the arrangements of their funerals. A number of the earliest rules for members (aside from paying dues) dealt with the requirement that members attend other members’ funerals, and march in procession at these occasions. The society also had a charitable function, assisting new arrivals in the port. 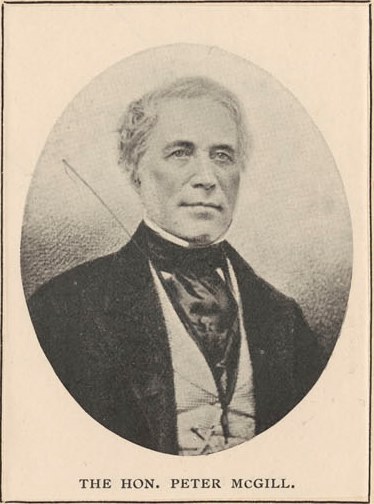 McGill was St. Andrew's Society of Montreal's first president and was mayor of Montréal from 1840 to 1842).

Over the next century, a number of St. Andrew’s Societies were founded, particularly in the mid-1830s and early 1840s. The St. Andrew’s Society of Montreal was founded in March 1835 during what could be described as a tumultuous social and political time with the passing of the 92 Resolutions in Lower Canada’s House of Assembly, and the stirrings of unrest that would culminate in the Rebellions of 1837 and 1838. Already in the city, the more conservative elite among the Irish and the English residents had organized a St. Patrick’s and St. George’s Society, so the Scots were compelled to do likewise. While these societies generally distanced themselves from politics, their members were politically active, and membership in them often was associated with the more conservative elements of society. Men like Peter McGill, Montréal’s first president, held political office (he was mayor of Montréal from 1840 to 1842). Like all St. Andrew’s Societies before and following, the society was created as a charity, raising money for the poor, specifically Scots, and generally, those newly arrived. The society used its dinner in honour of St. Andrew to raise funds for their charitable fund, and the society elected officers who would administer the society, the charity and the celebration of their patron saint. When crafting their constitution the St. Andrew’s Society of Montreal modelled theirs after the St. Andrew’s Society of New York. 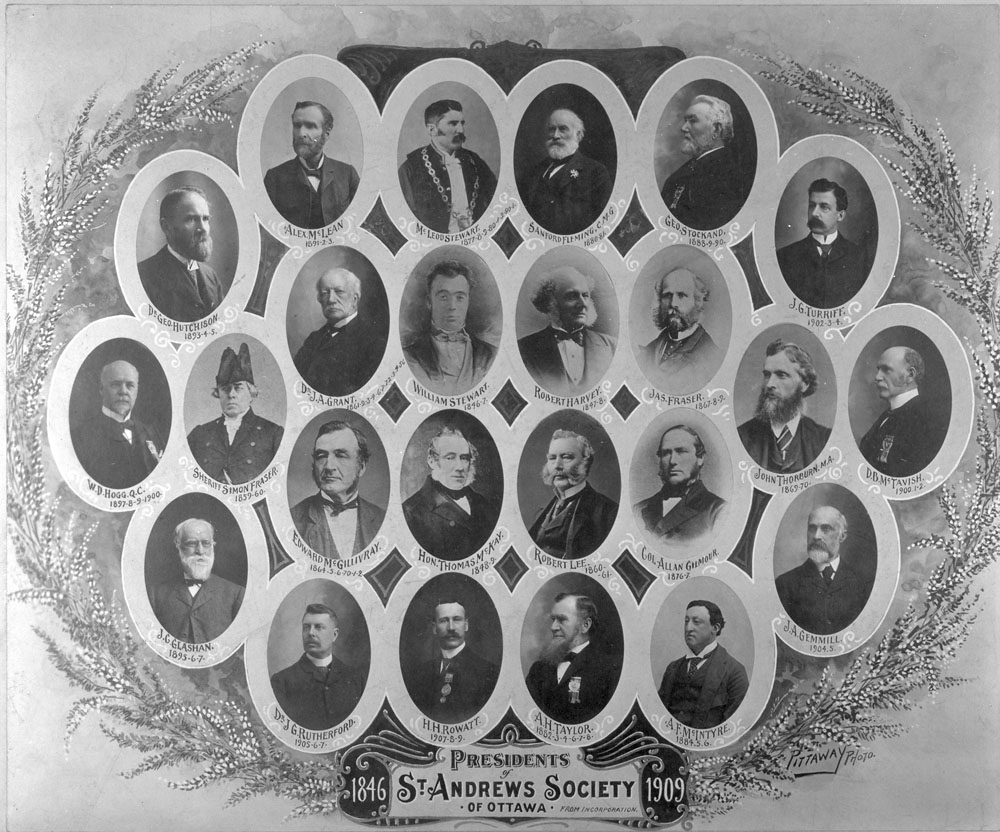 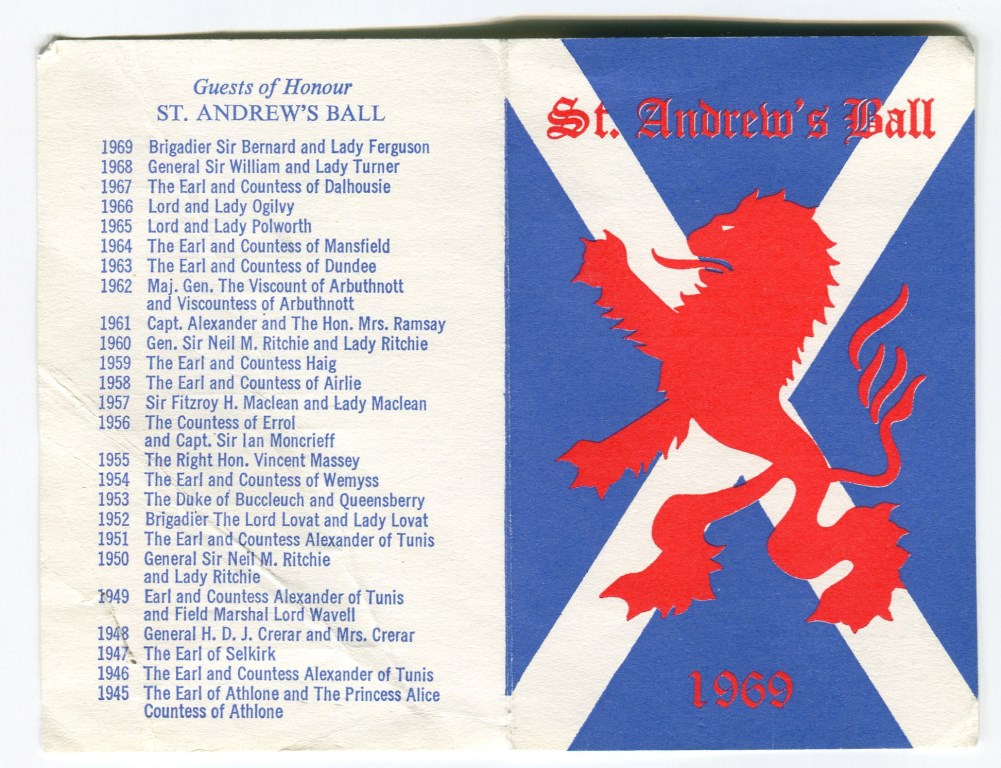 Over the next decade a number of St. Andrew’s Societies were formed in Upper and Lower Canada (later Canada West and Canada East): Hamilton and St. Catharines in 1835; Toronto in 1836; Québec City in 1837; Kingston in 1840; and Ottawa in 1846. This associational formation among the Scots was not in isolation, it was a period which was marked by the creation by a number of “national” groups in the colonies of ethnic groups such as St. George’s (English), St. Patrick’s (Irish) and St. David’s (Welsh) societies in towns and cities.

Despite the political influences that spurred many St. Andrew’s Societies to form during the unrest of the Rebellions, most of these societies continued to exist, and formed an important community organization for the Scottish elite. The St. Andrew’s Society enabled them to create an important social and business network with like-minded individuals, and a place to comfortably express themselves as Scots. St. Andrew’s Societies continued to be founded through the 19th century, and into the 20th, as Scots established themselves in new areas of settlement.

While it can be stated that these societies were all created to serve similar aims, and used similar means to organize and rules to operate, they were independent of each other. There were no umbrella organizations that provided these groups with any guidance or structure; rather, they relied on more informal connections. That is not to say that they were not aware of each other, and they communicated with one another. The annual celebrations of St. Andrew’s Day were used to celebrate their mutual interests as Scots and elites, primarily through the distribution of greetings to the other societies. As part of the dinners (and later balls) messages and telegrams were read out to those gathered from the other St. Andrew’s Societies in Canada, other parts of the British Empire and the US. There was also some inter-membership, with some men joining more than one city’s St. Andrew’s Society. The most striking example is that of Donald Alexander Smith, 1st Baron Strathcona and Mount Royal, who founded the St. Andrew’s Society in Winnipeg and served as its first president. He later became president of the St. Andrew’s Society of Montreal (1888‒90). 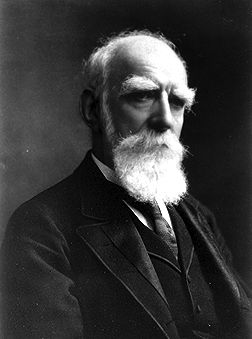 Smith was an enthusiastic supporter of the Canadian Pacific Railway, and his financial backing was essential to its progress (courtesy Library and Archives Canada/C-3841).

St. Andrew’s Societies were geared to and attracted mostly members of the city’s business and social elite. There was a distinct class bias in the way that they celebrated, and the levying of fees among their membership left out the less affluent among the Scottish communities. Caledonian Societies which began to be formed around the 1840s were more popular among these Scots, and catered to what was perceived by some as less than cultured pursuits — specifically Highland Games, music concerts for Halloween and Burns Suppers. Toronto’s Caledonian Society was the first in 1839. For regions with a lower proportion of Scots there came to be the creation of St. Andrew–Caledonian Societies, which featured not only St. Andrew’s dinners, but also Caledonian or Highland Games. The first to be founded was the Victoria St. Andrew–Caledonian Society in 1870, followed by Vancouver in 1886.

Associational culture in the 19th century was masculine in its orientation. Groups like the St. Andrew’s Societies, Freemasons and others were open only to male members. While there were some women’s societies in the period, most were uniquely feminine in makeup and dedicated to more feminine pursuits like charity or temperance. It was only in the late 19th century that women became more visible at St. Andrew’s events, most notably with the introduction of the St. Andrew’s Ball in place of the traditional dinners of the early years. Montréal introduced its first St. Andrew’s Ball in place of its dinner in 1872, and has held one annually since. Women would become more active within the societies and celebrated their Scottish identity within the St. Andrew’s Societies. 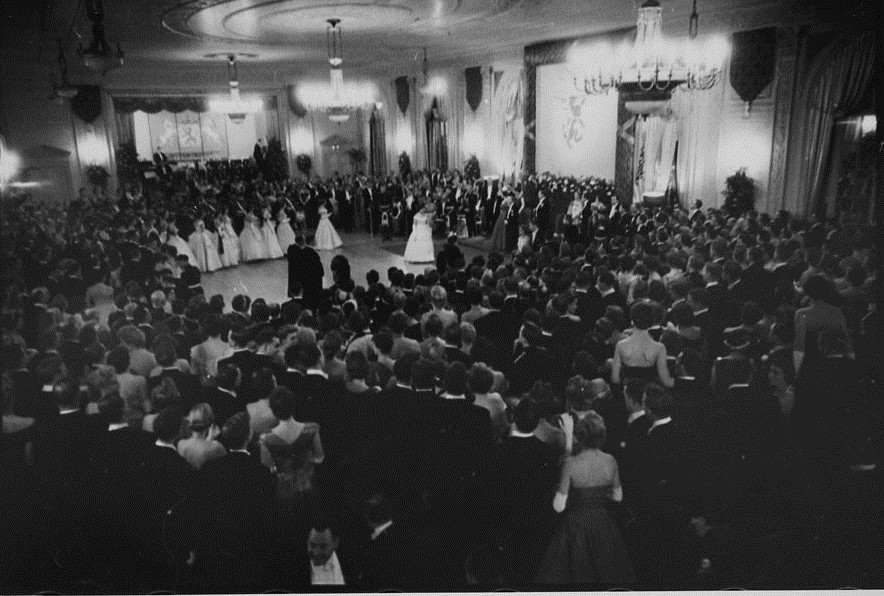 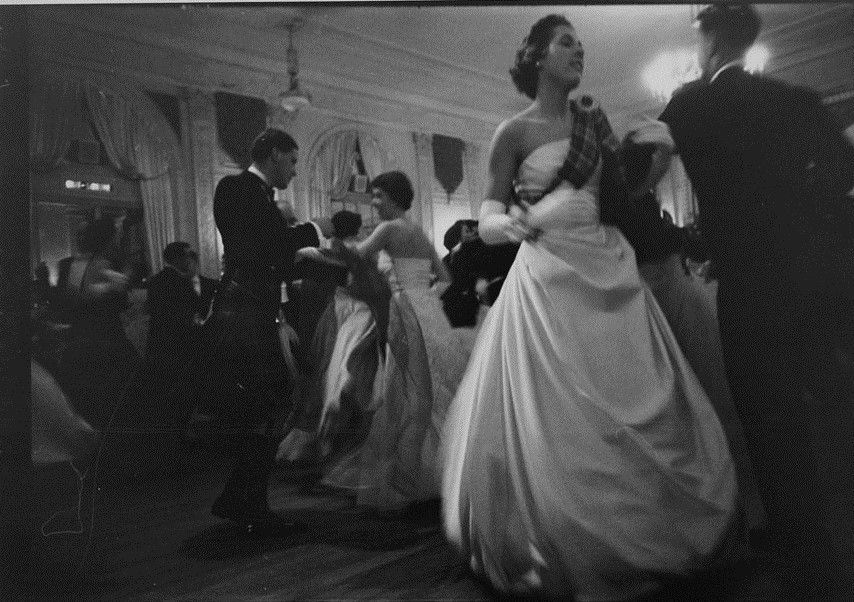 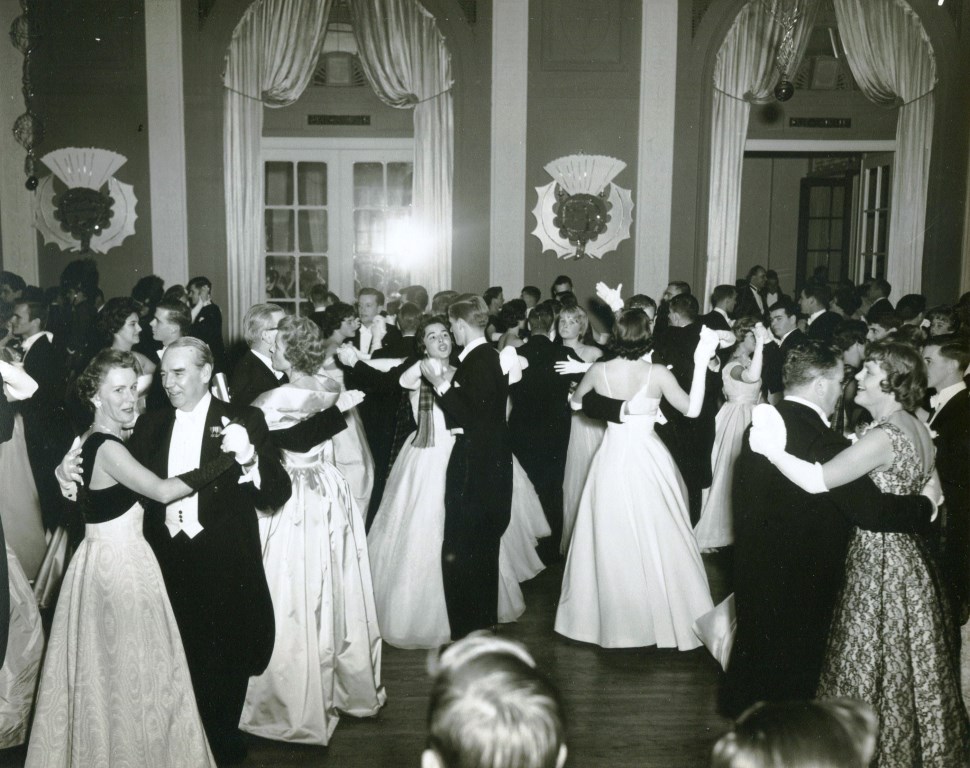 Female membership in the societies themselves came at around the same time, with the Montréal society granting memberships in 1866 to women. However, up until the 1940s, most societies segregated the female members from the males, having ladies’ committees that dealt mainly with the distribution and management of their charitable endeavours. Some societies created “Associate” memberships in order to classify their members according to responsibilities and privileges. The Winnipeg St. Andrew’s Society was the most notable holdout and did not allow female membership until 2015, when, after a legal fight, they began to accept applications from women.

St. Andrew’s Societies in the 19th century, and into the 20th century, tended to organize around St. Andrew’s Day. Typically, the day was commemorated with a dinner, and later in the 19th century with a ball. Montréal’s society also held a parade up until the 1860s, which was associated with a religious service at a Presbyterian church. Associational life has seen a decline in the last decades of the 20th century and the early 21th, and the surviving St. Andrew’s Societies have taken on a larger number and variety of activities in more recent years. Montréal’s society, for example, assumed responsibility for the Burns Supper on the dissolution of the city’s Caledonian Society in the 1970s, and more recently for the Montreal Highland Games. Toronto’s Society also hosts the Burns Supper, the St. Andrew’s Ball and other social events throughout the year. Most societies also hold whisky tastings and activities around the newly created holiday of Tartan Day (April 6). St. Andrew’s Societies continue to use their events as vehicles for raising money for charity. Both Montréal and Toronto have a strong educational element to their charitable work, sponsoring scholarships, cultural events, supporting the Centre for Scottish Studies at Guelph (Toronto being a major benefactor) and the Chair for Canadian Scottish Studies at McGill (Montréal being a major benefactor).