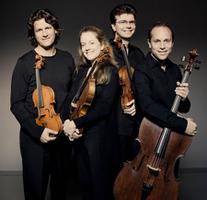 The St Lawrence String Quartet was formed in 1989 when Nuttall and Shiffman, who had both applied for graduate school in the US, decided instead to form an all-Canadian string quartet. The four founding members had previously all played together at the Banff Centre. The Royal Conservatory of Music (RCM) provided rehearsal space and coaching from cellist Denis Brott; through the University of Toronto the ensemble received coaching from violinist Lorand Fenyves, Nuttall's principal violin teacher. The group made its debut in Dec 1989 at the RCM in a series of concerts with guest artists Denis Brott, violist Jaime Laredo, pianist Anton Kuerti and clarinetist James Campbell.

A series of residencies followed, during which the ensemble studied with pre-eminent US string quartets: the Emerson (1990-2, Hartford), the Juilliard (1992-4) and the Tokyo (1994-6, Yale). During the SLSQ's formative years, its members received Ontario Arts CouncilChalmers awards and Canada Council grants.

The SLSQ attracted international attention in 1991, when it took second prizes in the Melbourne International Chamber Music Competition and the Glory of Mozart competition in St John's, Nfld. In 1992 they won the Young Concert Artists International competition (New York) and became the first Canadian ensemble to win the Banff International String Quartet Competition, winning the first prize, which included a Canadian concert tour. Members of the SLSQ have since returned to Banff as jury members, and Shiffman became its music director in 2006.

The SLSQ made their New York City debut in 1992. Their Paris debut, the following year, took place at the Opera de la Bastille. In Feb 1994 they debuted at the Amsterdam Concertgebouw; London's Wigmore Hall followed shortly. In 1998 they signed a recording contract with EMI Music Canada.

In 1998 the SLSQ was appointed chamber ensemble in residence at Stanford University, and in 1999, they took up residency in California. In 2012, in addition to teaching and coordinating the school's chamber music activities (and an intensive summer chamber music programme) they have collaborated with other departments at the university including the Faculties of Medecine, Education, Law, and Jewish Studies.

In 2005 the quartet performed well over 100 concerts annually, and by 2012 this had increased to over 120. They have toured Japan, Taiwan, Vietnam, Brazil, Israel, Australia and New Zealand, and regularly tour Europe. They perform in major festivals across North America and in Europe, and have performed at the White House, the Kennedy Center, Lincoln Center, Carnegie Hall and the Théâtre de la Ville (Paris). They make regional tours in Canada and have remained loyal to Canadian presenters, such as Music Toronto (wherethey were quartet-in-residence 1995-98), and Vancouver's Music in the Morning. They have been visiting artists at the University of Toronto annually since 1995.

The SLSQ devote considerable energy to contemporary works, and have programmed worksby Canadians Christos Hatzis, Allan Gilliland and Srul Irving Glick, Argentinian- born Osvaldo Golijov, and Americans Mark Applebaum and John Adams. Adams' String Quartet, was composed for the SLSQ and premiered at the Juilliard School in 2009. That same year, to celebrate their 20th anniversary, the SLSQ commissioned a number of Canadian works which they performed across the country by Derek Charke, Brian Current, Suzanne Hébert Tremblay, Marcus Goddard and Elizabeth Raum. These were recorded by the Canadian Music Centre's Centrediscs as Sea to Sea (2010) and won a JUNO nomination for best Classical Recording (2012).

Interdisciplinary projects have included a collaboration with Pilobolus Dance Theatre (Connecticut), with whom they toured the US. The SLSQ collaborated with the Penderecki and Molinari Quartets in 2000 at Festival Vancouver on the complete cycle of R Murray Schafer's string quartets. 'Parting the Wild Horse's Main" (number six) is based onTai Chi movements and John Lad (d 2007) performed in this capacity with the ensemble.

In 2011 the SLSQ inaugurated the John Lad prize awarded to a promising young quartet. Winners have been the Arneis Quartet (2011) and the Aeolus Quartet (2012).