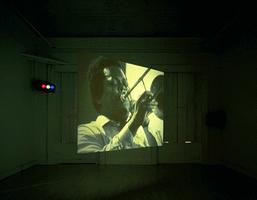 Stan Douglas, video and installation artist, photographer (born 11 October 1960 in Vancouver, BC). Associated with the Vancouver School, Stan Douglas is a conceptual artist who primarily works in photography and video. His work confronts the failed utopian dreams of modernist aesthetics and investigates contemporary social reality as well as the techniques of mass media. In doing so, it engages the history of literature, cinema and music. Douglas is one of Canada’s most widely celebrated and internationally successful contemporary artists.

Stan Douglas graduated from the Emily Carr College of Art and Design (now the Emily Carr University of Art and Design) in 1982 and was included the following year in the Vancouver Art Gallery's survey Vancouver: Art and Artists 1931–1983. The slide/sound installation Deux Devises of 1982–83 offers an early key to his concerns, juxtaposing a 19th-century love song by French composer Charles Gounod with slide-dissolves to lyrics in typed translation with English subtitles on an empty screen; the second segment shows Douglas's own mouth forming the words to Mississippi Delta blues legend Robert Johnson's "Preachin' Blues" from 1936. This contrast of salon sensibility and blues lament is jarring and acute, a challenge both to identity and cultural assumptions or standards. As a Black person growing up in a predominantly White culture, Douglas has noted his sense of underlying alienation, a self rarely mirrored in the surround of popular images. He is also pointing out the degree to which a light song from the centre of 19th century European civilization is given precedent over the tormented laments of an African American in what was then the impoverished and backward Jim Crow south.

Stan Douglas’s research and use of historic film, photography and music as characteristic technology and theme have remained consistent throughout his career. The installation Onomatopoeia, included in the National Gallery of Canada's centennial exhibition Songs of Experience (1986), brought him new attention. An old-fashioned player piano is combined with projected images of disused tools, weaving machines and their punch-cards (so much like player-piano rolls). The accompanying Beethoven sonata (played by the piano) recalls the ragtime of American Scott Joplin. Once again, an evocation of times past and a meditation on history and society, pleasure and drudgery, high and low culture.

Overture (1986), on the other hand, consists of ragged, jittery found 16mm black-and-white archival footage shot between 1899 and 1901 of a train trip through the precipitous passes and tunnels of the Rocky Mountains. The footage is accompanied by a voiceover reading early passages from the first volume of Marcel Proust’s Remembrance of Things Past speaking of the disorientation of waking up in the dark in the middle of the night, trying to remember in that instant who and where one is. While the title of the work alludes to the opening meditations on memory in Proust’s masterpiece, which was itself most likely in part modeled on the famous overtures of German composer Richard Wagner’s operas, the piece seems to at least partly suggest the way in which technology disrupts both our experience of space and of the past.

With Television Spots (1987–88) and Monodramas (1991), Douglas made interventions in the television context; less than a minute long each, these video works were as brief as ads but singularly "noncommercial" in tone.

The double-sided video projection Hors-champs (1992), produced with the Musée national d'art moderne in Paris, offered further comment on television styles, in this case the classic manner of Jean-Christophe Averty in 1960s France. At the same time, Hors-champs celebrated the "free jazz" played in those years by displaced Black Americans, while noting their virtual exile in Europe at the time. Douglas continues to attract the support of museums internationally; the three-channel video installation Evening (1994) was commissioned by The Renaissance Society at the University of Chicago, and the Der Sandmann (1995) film installation was produced in Berlin.

The winner of the Scotiabank Photography Award in 2013 and the prestigious Hasselblad Foundation Award in 2016, in more recent years Stan Douglas has come to be recognized as a significant photographer in his own right, on par with Jeff Wall. Abbott & Cordova, 7 August 1971 is a back-lit, elaborately staged depiction of the Gastown riot that involved hippies occupying a traditionally working class corner of East Vancouver. In the dimly lit and smouldering scene, police wrangle people into the back of a van in the foreground to the left; an officer on a horse is to the right, and a young man dashing across the street with another officer brandishing a billy club looking on. Printed in layers on an immense sheet of glass, the piece was installed as part of the Woodward’s building in East Vancouver. Many of Douglas’s photographs involve the restaging of historical events. In Powell Street Grounds, January 1912 (2008), a crowd of men stands tightly together while the police beat two protesters. A woman rushes two little girls along the sidewalk. In Two Friends, 1975 (2010), a man in a green leisure suit sits in a bar with a woman wearing a red cocktail dress. Both are gazing off into space, bored and distracted.

In 1988 Douglas curated the authoritative Samuel Beckett: Teleplays for the Vancouver Art Gallery, an exhibition that subsequently toured Canada, the United States, Australia, France and Italy. He also organized a series of lectures on contemporary art in Vancouver, which he edited to appear as the book Vancouver Anthology: The Institutional Politics of Art.

Douglas has enjoyed positive response to his work since the late 1980s, featured at Documenta IX (Kassel, 1992), the Sydney Biennale (1990, 1996), the Centre Pompidou's touring Passages de l'Image (1990) and the Biennale de Lyon (1995, 1997), as well as major solo exhibitions at museums in France, Germany, the Netherlands, Switzerland, the United States and Canada. His research and care for both production and presentation are comprehensive, making engagement and intellectual challenge a pleasure.