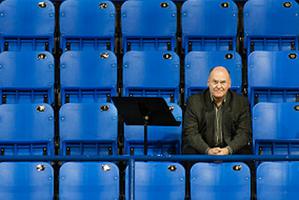 Stephen George Chatman, composer, teacher (b at Faribault, Minn 28 Feb 1950). Chatman studied with Ross Lee Finney, Leslie Bassett, William Bolcom and Eugene Kurtz. He obtained a Bachelor of Music (1972) degree from the Oberlin Conservatory and Master of Music (1973) and Doctor of Musical Arts (1977) degrees from the University of Michigan. A Fulbright-Hays grant enabled him to study with Karlheinz Stockhausen at the Hochschule für Musik in Cologne, Germany, in 1974. He won three BMI Student Composer Awards (1974-76), and also received honours from the US National Institute of Arts and Letters (Charles Ives Prize, 1975), the National Endowment for the Arts (1977), the Martha Baird Rockefeller Fund (1978) and the American Symphony Orchestra League (1986).

Chatman moved to Vancouver in 1976 to teach composition at the University of British Columbia, where in 1982 he was promoted to full professor. He is currently head of composition at the UBC School of Music. Chatman has composed many works on commission, mostly through the Canada Council, British Columbia Arts Council and the CBC, for the Toronto, Edmonton and Vancouver Symphony Orchestras, the CBC Vancouver Orchestra, the SOCIÉTÉ DE MUSIQUE CONTEMPORAINE DU QUÉBEC, Vancouver New Music, the Eckhardt-Gramatté competition, pianists Jane COOP and Marc-André HAMELIN, contralto Maureen FORRESTER, the Association of Canadian Choral Conductors, the Vancouver Chamber Choir, Vancouver's Phoenix Chamber Choir, Cantata Singers and Chor Leoni, Calgary's Kantorei Choir, the Coventry Cathedral Choir, the Verdehr Trio and the Canadian Children's Opera Chorus. His works have also been performed by the orchestras of St Louis, San Francisco, Detroit, Dallas, Winnipeg, Calgary, Sydney (Australia), BBC, Seoul and Berlin Radio, as well as by flutist Robert AITKEN, the PURCELL STRING QUARTET and guitarist Leo Brouwer.

In 1988-89, Chatman became British Columbia's first "composer in residence," creating several works for Vancouver's Music in the Morning concert series. He was appointed "composer in residence" with the National Youth Orchestra of Canada in 2004, and in 2003 Chatman and two other composers participated in an exchange between Canada and China that took him to Beijing and Shanghai. He was the first composer to receive the University of British Columbia's Dorothy Somerset Award for Performance and Development in the Visual and Creative Arts (2004), and in 2005, 2006 and 2010 won outstanding classical composition awards at the Western Canadian Music Awards for Proud Music of the Storm, 2005, Lawren S. Harris Suite for Piano Quintet, 2006 and Earth Songs, 2010. In 2007, his composition Vancouver Visions was nominated for a Juno Award for classical composition of the year. His work Earth Songs was nominated in the same Juno category in 2010. In 2010 Stephen Chatman also received the SOCAN Jan V. Matejcek New Classical Music Award.

His music, including approximately 80 choral works, has been published by E.B. Marks, Presser, Boosey & Hawkes, E.C. Schirmer, Dorn, Frederick Harris, Jaymar and Berandol, and recorded on the CBC Records, Centrediscs, CRI and Opus One labels.

Chatman's music is direct and immediately appealing, showing influences ranging from Ravel to Béla Bartók, Copland, Stravinsky and Charles Ives. His traditional yet innovative choral works have enjoyed much success, especially as championed by the Vancouver Chamber Choir and its conductor, Jon Washburn (who have recorded 3 Chatman CDs for CBC Records and the Canadian Music Centre's Centrediscs label). The composer has drawn inspiration from Canada's picturesque West Coast in works such as Due North, Grouse Mountain Lullaby, Five British Columbia Folk Songs and Mountain Sojourn.

Stephen Chatman is an associate composer of the CANADIAN MUSIC CENTRE, a member of the American Society of University Composers, and a member of SOCAN.