In 1976, the former guest adjudicator for the Newfoundland Drama Festival, Maxim Mazumdar, founded the Provincial Drama Academy in Stephenville, a small town on the west coast of Newfoundland. His purpose was to offer local theatre training to Newfoundland youth. In 1979, a professional theatre company was created to perform alongside the rapidly expanding academy and, with 5 or 6 people on the payroll and a shoe-string budget, the Stephenville Festival was born. After productions of Macbeth and The Man Who Came to Dinner at the Stephenville Arts and Culture Centre, founding artistic director Mazumdar, along with administrator Cheryl Stagg and director Edmund MacLean, worked with a volunteer local committee to nurture and expand the fledgling summer company. By 1984, 8 very different productions were running, including the musical Jesus Christ Superstar, the Canadian play Waiting for the Parade and the classical play Cyrano de Bergerac, with Gordon PINSENT performing the lead role in the last of these.

Along with its expanding summer season, the Stephenville Festival continued to work in conjunction with the Provincial Drama Academy. Artists employed by the festival offered academy students intensive training workshops in acting, voice and movement. As soon as the festival season closed in mid-August, another phase of artistic activity began - the Stephenville Festival School Tours. Actors rehearsed Shakespearean excerpts, which they toured across the province, visiting up to 19 schools in a week. In 1984, a promotional tour was arranged to St John's and Halifax in order to raise the profile of the festival. While a substantial budget was set aside for what were expected to be heavy financial losses, 97% houses of Jesus Christ Superstar and Cyrano de Bergerac were sold at the NEPTUNE THEATRE in Halifax with similar numbers recorded for the St John's performances. Touring continued over the next 3 years.

In the late 1980s the Stephenville Festival staggered under a series of blows. Attendance figures dropped, attributed by some to the programming and by others to the possibility that tourists were siphoned off by the touring shows. In 1987, the town of Stephenville cut the subsidy for the festival's brochure. Four months before the opening of the 1988 10th Anniversary Festival, Maxim Mazumdar died at the age of 36. And finally, in 1989, under the artistic leadership of Sean Mulcahy, who abandoned the repertory approach of earlier seasons, the festival racked up a deficit of $48 000.

Cliff LeJeune, who had directed under Mazumdar's leadership, took over as artistic director from 1990 to 1994 and remained a guiding influence through 1995. Under LeJeune the company managed to expand even while it addressed the problems of its deficit. Edmund MacLean, who assumed artistic directorship in 1994, successfully reshaped the company. Over the years of his influence, the festival radically shifted its funding base. With almost half of its budget raised by donations, sponsorships and fundraising projects, the festival was once again able to expand its season, frequently marking specific celebrations. In 1998 Stephenville Festival's 20th anniversary was celebrated with a wide variety of theatrical offerings. This was followed by the 1999 season, which was a tribute to Newfoundland's Confederation, with a repertory of predominantly Newfoundland material. The late 1990s found the Stephenville Festival a thriving, exciting company; through careful programming and innovative fundraising, it had clearly survived its late 1980s crisis and emerged a stronger and more diverse company.

The year 2001 saw a new artistic director, Jerry Doyle, under whom large musicals were again mounted. Some original material was created and as early as 2002 Doyle was quoted as saying that the festival's funding was in good shape. In 2003, a grant from the Atlantic Canada Opportunities Agency supported that season's special 25th anniversary celebrations. The anniversary year saw a large musical as well as Ray Guy's Young Triffie Been Made Away With and other cabaret-style entertainments. Early in 2004 it was reported that the festival had commissioned a new play from talented Newfoundland playwright Robert Chafe. Vive la Rose was subsequently workshopped over the summer. Unfortunately, the 2004 season marked a return to fiscal uncertainties. With an ambitious season planned for 2005, the Stephenville Theatre Festival fought back aggressively with productions of Chicago and Stones in His Pocket. Both were well reviewed but the box office returns were consistently down. Board members pointed to the local flood, the closing mill, soaring gasoline costs and the overall low tourist numbers for the difficult season.

Doyle brought in an ambitious season in 2005 and initiated a five-year plan to deal with the sizable deficit. While the season was clearly a critical success, box office was substantially down and the inherited deficit was deepened. The positions of artistic director and general manager were eliminated and the single position of artistic producer was created and filled by former executive director Eva Moore. Other changes were introduced in 2006, with fewer and smaller shows, and by the close of the season the Stephenville Festival was moving onto firmer ground. The painful process of paying down the deficit was firmly under way.

Seasons 2007 and 2008 were marked by tentative steps toward the black and a return to artistic confidence. Marking the community's "Come Home" year, the audience grew. The festival also saw the workshop production of Robert Chafe's Vive la Rose, retitled Emile's Dream and set to tour extensively. Perhaps the most reassuring sign was the successful bid for government funding. The festival's growth continued in 2008 when the company returned to an old favourite and remounted Man of La Mancha. Along with the realization of a profit, there was a promise of future government support.

The 31st anniversary of the Stephenville Festival was marked in 2009 with appropriate celebratory events, but low attendance remained a persistent problem. Season 2010 continued the conservative course with a combination of scripted plays and more review-style company shows. With Little Shop of Horrors, Staircase and Proof, all audience-pleasing choices, the company appeared to be moving forward. However, mid August found then-artistic producer Eva Moore publicly lamenting the low attendance and predicting the closure of the festival. Plans for a 2011 season went ahead and fundraising events were scheduled for the coming winter. 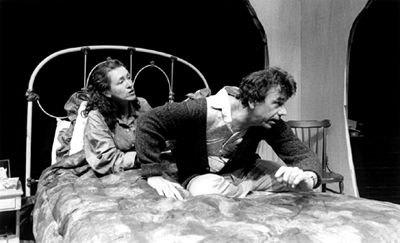