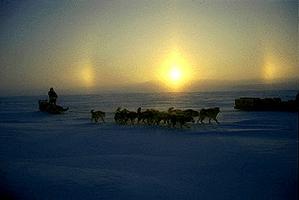 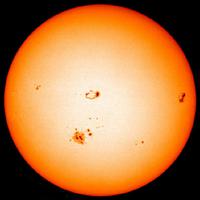 Sunspots are clearly visible on this image captured by the SOHO satellite in 2003 \r\n(Image: ESA, NASA)
PreviousNext

The sun, a typical STAR, is an incandescent gaseous globe, 1.39 million km in diameter, with a mass of 2 x 1030 kg, an effective temperature of approximately 5800 K (Kelvin) and surface radiant power of 4 x 1020 megawatts (MW). The earth intercepts only 17 x 1010 MW, mostly as visible light and infrared radiation; for comparison, the total generating capacity of Canadian electrical plants is under 105 MW. The current theory, called solar nucleosynthesis, states that the sun's power originates in nuclear reactions occurring in a hot (15 million K) core which contains half the solar mass in only 1.5% of its volume.

Beginnings
Geological and astronomical evidence suggests that the reactions were triggered 5 billion years ago when the temperature and density at the centre of a condensing cloud of primordial interstellar gas rose to levels where hydrogen atoms fused into helium atoms. The heat released by this NUCLEAR FUSION creates enough internal pressure to counterbalance gravitational contraction. This equilibrium will last for billions of years before the sun's outflow of energy is drastically altered.

The theory of solar nucleosynthesis was challenged when observational tests failed to confirm the predicted flux of neutrinos. It was unclear whether the observed deficit originated in the theory of particle PHYSICS or in the assumptions used to construct physical models of the solar interior. The Sudbury Neutrino Observatory (SNO), which began operating in April 1999, is collecting data that will provide revolutionary insight into the properties of neutrinos and the core of the sun. Neutrinos are tiny particles of matter even smaller than atoms, so small and so fast that they pass through everything, passing between atoms or through the empty space between the nucleus of the atom and the electrons that surround it. They may make up 90% of the universe's matter.

SNO is 2040 m below ground level in the Creighton mine near Sudbury, and is designed to detect neutrinos produced by fusion reactions in the sun. It is a heavy-water (D20) Cherenkov detector that uses 1000 tonnes of heavy water on loan from Atomic Energy of Canada Limited (AECL), contained in a 12 m diameter acrylic vessel. Heavy water is a type of water chemically altered to be more dense than normal water.

When a neutrino hits an atom of heavy water, it produces a tiny flash of blue light, called Cherenkov radiation. This light is detected by a geodesic array of 9600 photomultiplier tubes surrounding the heavy water vessel. The detector is immersed in light (normal) water within a barrel-shaped cavity 30 m in diameter excavated from Norite rock. The location in the deepest part of the mine provides an overburden of rock to shield the site from cosmic rays, so that the only things that get through are neutrinos. The detector laboratory is immensely clean, so as to reduce background radiation signals that would otherwise hide the very weak signal from neutrinos.

So far, the observatory has been very successful; 10 to 20 particles a day have hit a heavy water atom. Physicists hope to determine whether the particles have any mass, and why they have only detected half as many as they think the sun produces.

Because the sun's visible surface (photosphere) is opaque, the nature of its interior must be deduced by applying fundamental laws of physics to the measured surface properties. The application of seismic methods to "sunquakes" (eg, vibrations of the entire sun) can fix the location and motions of internal disturbances and reveals that convective turbulence extends to a depth of 200 000 km. Such knowledge is vital to explain sunspot formation. The cool (about 3700 K), strongly magnetic spots are believed to emerge from below the photosphere.

They range in size from pores of 1000 km to elongated, irregular clusters of spots spanning 200 000 km. A typical spot, 30 000 km across, emerges in a day or 2, accompanied by smaller companions of opposite magnetic polarity; the group disintegrates in under 2 weeks. Intense magnetic fields exist outside of sunspots as clusters of elements, each element being no more than 300 km across.

An active region consists of a sunspot group embedded in irregular, dense aggregates of magnetic elements. The sun does not rotate as a rigid body about its axis: the solar equator rotates in 25 days, a solar parallel of latitude at 60°, in 29 days. This differential rotation organizes the churning gaseous fluid in the sun's shell in a dynamo action that creates the magnetic patterns characteristic of sunspot activity. The average number of spots grows and fades in an 11-year cycle. Successive cycles can vary greatly in amplitude; however, extremely low activity can last for almost a century (eg, the "Maunder Minimum," 1645-1715 AD). Solar activity may influence CLIMATE CHANGE on the Earth but no direct, physical link has been identified.

The sun's rarefied outer atmosphere (chromosphere and corona) is too faint to be visible to the unaided eye, except when the moon blocks the photosphere during a total solar eclipse. The chromosphere then appears as a highly irregular pink-red band a few thousand kilometres thick which is surrounded by the pearly corona that extends in jagged streamers for millions of kilometres. Magnetic fields shape both regions.

A temperature inversion begins 300 km above the photosphere: the top of the chromosphere is 15 000 K hotter than its base; the corona is at 1.5 million K. The radiation from the hot, thin coronal gas is concentrated at X-ray and extreme ultraviolet wavelengths; it is now observable continuously from spacecraft with imaging optics designed for these wavelength regimes. The cause of the high temperatures is still disputed. The corona is too hot to be restrained by the sun's gravity; it expands as a supersonic solar wind consisting chiefly of electrons, protons and helium atoms and having a speed, near the Earth, of 300-800 km/s. The rate of mass loss, in millions of tonnes per second, is only 3 x 10-14 solar masses annually.

As the sun's global pattern of magnetic fields slowly evolves during its 11-year activity cycle, sudden releases from time to time of magnetic stresses lead to losses of equilibrium. In a matter of hours structures spanning up to a quadrant of the sun are thrown off like bursting bubbles. These transient coronal mass ejections (CMEs) travel through interplanetary space at speeds of several hundred kilometres per second; they can induce major geomagnetic storms with brilliant displays of NORTHERN LIGHTS if they intercept the Earth. When solar magnetic stresses are released in a more compact volume containing a sunspot region, localized explosions called solar flares erupt. Intense beams of X-ray radiation from flares cause sudden ionospheric disturbances, which disrupt radio communications. In addition, high-speed streams in the solar wind unrelated to CMEs, flares or sunspots strongly agitate the Earth's magnetosphere. These streams originate in "coronal holes," vast spaces of reduced temperature and density, where coronal magnetic field lines are open to interplanetary space.

Canadian research in solar physics dates from the construction in 1905 of spectrographic apparatus at the Dominion OBSERVATORY, Ottawa, for application to solar eclipses and to the measurement of the sun's differential rotation. Solar radio ASTRONOMY in Canada began in 1946 at the Radio and Electrical Engineering Division of the NATIONAL RESEARCH COUNCIL, Ottawa.

Since then, NRC laboratories have daily monitored the flux of microwaves emitted by the sun at 2800 MHz, a measurement used worldwide as an index of solar activity. NRC's Ottawa River Solar Observatory (1970-92) recorded and analyzed fine chromospheric structures related to sunspot activity and flares. Observations of the sun's far infrared spectrum were made by the University of Calgary from BALLOONS between 1974 and 1985 and from high-altitude aircraft during total solar eclipses in the same period. The coolest layers at the base of the solar atmosphere are being explored at submillimetre wavelengths by scientists at U of C and U Leth with the James Clerk Maxwell Telescope, operated jointly by Canada, the Netherlands and the UK on Mauna Kea, Hawaii. A program for investigating the extreme ultraviolet radiation of the sun using space vehicles was initiated at UNB in 1994.