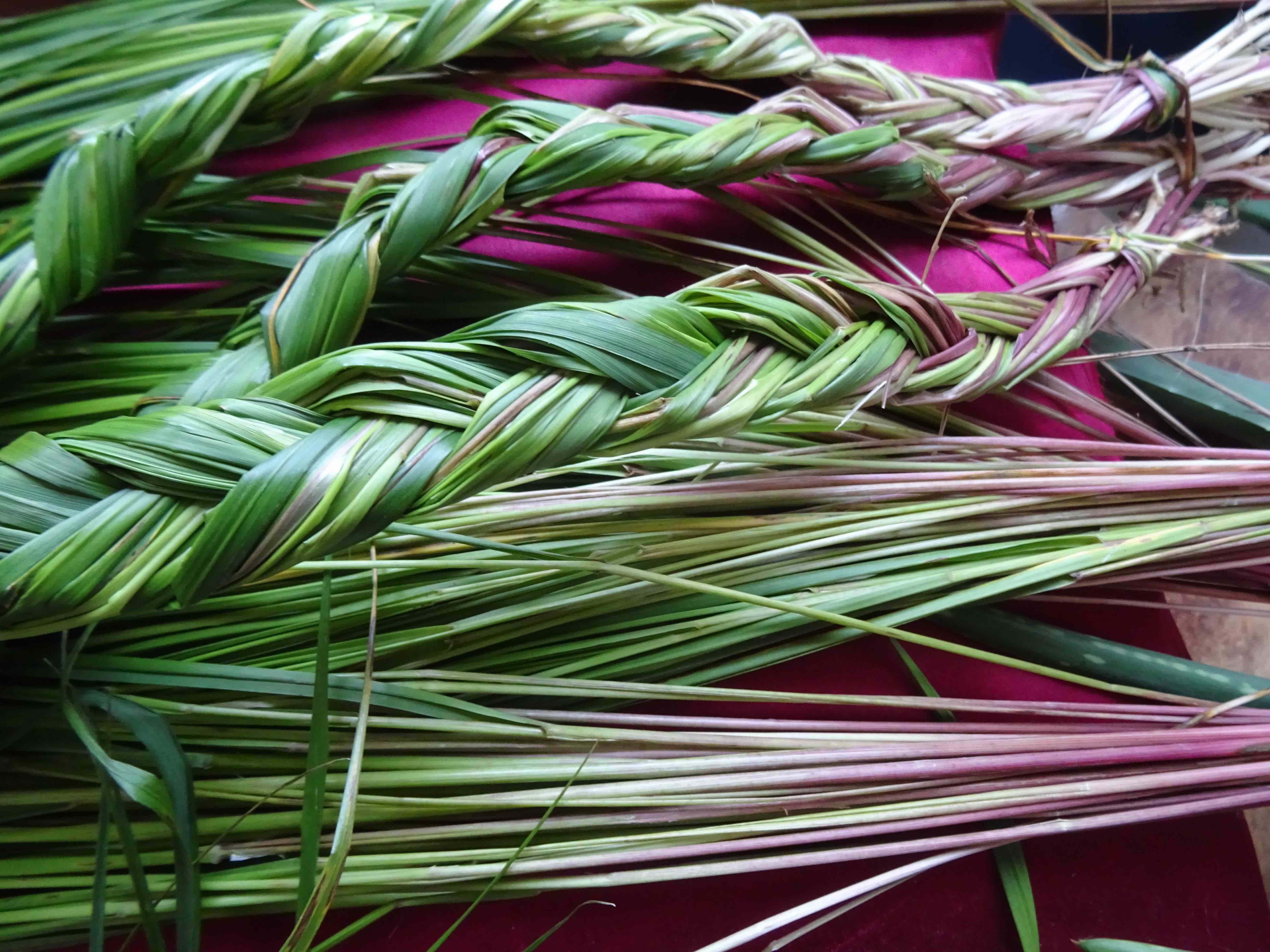 Sweetgrass is a perennial grass, in the family Poaceae. Usually placed in the genus Hierochloë, it is sometimes included within the genus Anthoxanthum. It has often been treated as one species, Hierochloë odorata, but currently taxonomists recognize up to four species, two of which grow in Canada: common sweetgrass (Hierochloë hirta subspecies arctica) and alpine sweetgrass (H. alpina).

The flat, bright green leaves can grow up to half a meter long or more, and have a distinctively reddish colour at their base. The flowers are small and greenish, and grow in branching clusters at the top of slender, upright stalks. The seeds are small and often infertile, and rarely germinate to create new plants. Sweetgrass’s most common means of reproduction comes from its creeping, underground stems. These stems, known as rhizomes, grow horizontally under the earth, creating dense patches of grass that can be manually divided up to produce new plants.

Sweetgrass (Hierochloë) thrives in diverse habitats and is circumpolar in distribution. Members of the genus are native to northern Eurasia, Greenland, Iceland, Canada and the United States (except in the south central and southeastern regions). In Canada, common sweetgrass (Hierochloë hirta subsp. arctica) grows near rivers, lake edges, and wet meadows, often forming dense patches, from sea level to subalpine zones. Alpine sweetgrass (Hierochloë alpina) grows near sea level in the Arctic, and in meadows and on rocky slopes in subalpine and alpine areas in other parts of Canada, especially in the Pacific Coastal and Rocky Mountains.

Methods of harvesting depend on the cultural traditions of the harvesters. Some people cut the grass blades at the base, and others pull up clusters of the leaves with their pink bases intact. Usually sweetgrass is harvested in the summer during the growing season, and harvesters select the vegetative plants rather than the flowering or fruiting plants. Many Indigenous experts affirm that continuous harvesting of sweetgrass helps to maintain the patches. If the sweetgrass meadows are neglected they will gradually disappear, to be replaced by other species of grasses, herbs and shrubs. Some people traditionally burn over their sweetgrass meadows every few years as a way of renewing them and enhancing their productivity.

Sweetgrass is known for its sweet scent. The vanilla-like fragrance is produced by an aromatic compound known as coumarin, which is even more evident when the leaves are dried. Sweetgrass is strewn on floors as a room freshener, used to stuff pillows and mattresses, woven into baskets and hats, and — usually after the leaves are plaited into a long, thick braid — burned as a purifying smudge or incense. More recently, people have used sweetgrass in aromatherapy, and as a scent for candles and bath salts. In parts of Europe it is used as a distinctive flavouring in distilled beverages such as vodka. There are many medicinal applications for sweetgrass as well, ranging from treating colds to treatment of venereal infections.

For Indigenous peoples in North America, sweetgrass is revered as a sacred plant. For many it is a cultural keystone species, reflecting a group’s cultural identity and embodying their values and beliefs. Among the stories told about sweetgrass is Skywoman Falling, an origin story with many variations among the Great Lakes Indigenous peoples (see also Eastern Woodlands Indigenous Peoples in Canada). In this story, all the birds and animals are represented as helpers of humans, and humans — in the form of Skywoman — as helping to renew the Earth with green plants. In at least one version of the story, first plant used is wiingaashk — the word for sweetgrass in Anishinaabemowin. 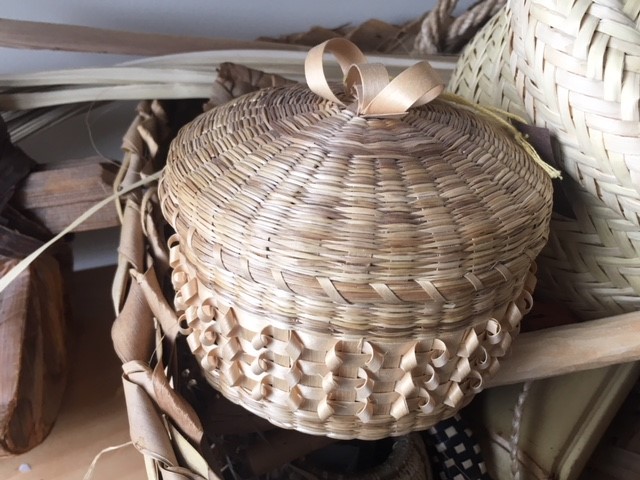 Sweetgrass leaves at the harvestable stage are bright green, and, depending on when they are picked and how quickly they are dried, turn light green to straw-coloured. For weaving into baskets, the dried leaves are soaked, and then coiled or twined, alone or with other materials as the foundation. Experienced weavers often mix sweetgrass dried in different ways to create subtle designs, or add a few dyed leaves as coloured decorations. In eastern Canada and northeastern US, for example, Haudenosauneeweavers combine finely split splints of black ash wood with sweetgrass leaves to make intricate, decorative baskets of many styles. Hats, dolls and other items are also crafted from sweetgrass leaves. The Wolastoqiyik (Maliseet)and Mi’kmaq of eastern Canada also make sweetgrass baskets.

On the Great Plains, the Siksika (Blackfoot) and their relatives have many uses for sweetgrass, which they call sipátsimo. They use it as a ceremonial incense during daily prayers, burn it at major tribal events such as the Sundance, and use the smoke to purify tribal dancers. Siksika also used sweetgrass leaves to treat saddle sores on their horses, packed braided sweetgrass leaves into saddles, and fed their horses sweetgrass to give them stamina. They also inhaled sweetgrass smoke or drank an infusion of the plant for colds, coughs and sore throats, and used water in which the stems had been soaked as an eyewash. 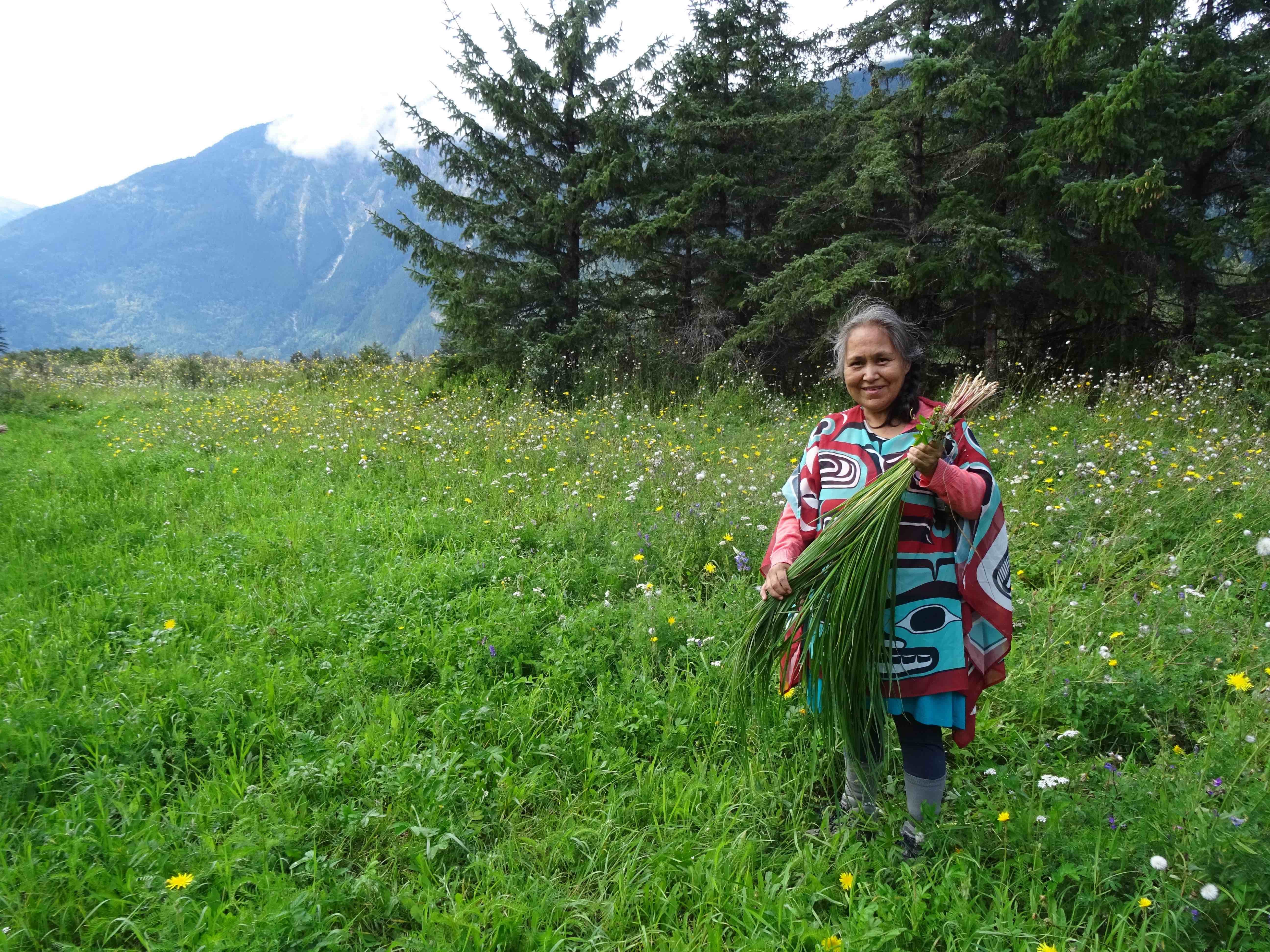 Sweetgrass was used to make a hair wash and hair tonic, not only by the Siksika, but by the Nlaka’pamux (Thompson) of British Columbia, who call sweetgrass xásxast (literally, ‘good-good’). The Nlaka’pamux were said to have traded for sweetgrass braids from the Siksika. Other Interior Salish Peoples, as well as the Ktunaxa of British Columbia, also use sweetgrass for ceremonial and medicinal purposes. On the far West Coast of Canada, the Nuxalk (Bella Coola) have been using sweetgrass from the estuary of the Bella Coola River for ceremonial purposes for generations; according to some, they also learned about using sweetgrass from the Siksika, who were said to have visited the Nuxalk at some point in the early 20th century.

Native Americans, including Kiowa, Cheyenne, Gros Ventre, Lakota, Menominee, American Haudenosaunee and Quinault, use sweetgrass in religious ceremonies and purification in similar ways to their Canadian neighbours and relatives.