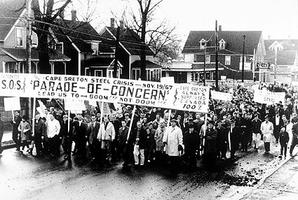 Sydney Steel Corporation (Sysco) Steel has been produced in SYDNEY, NS, since 1899, when the Dominion Iron and Steel Co established a steelworks to exploit Cape Breton COAL and Newfoundland IRON ORE. Production of railway rails began in 1905. Several changes in ownership took place until Hawker-Siddeley took over and ran the plant in the 1960s. The steelworks has been operated by the NS government since 1967.

The government, faced with a socially unacceptable shutdown, formed a CROWN CORPORATION to keep the industry alive. The plant consists of 2 small blast furnaces and several basic open-hearth furnaces, with an annual raw-steel capacity of about 910 000 tonnes. The low productivity of the plant and the poor demand and prices for its products (mainly rails and semifinished steel) made Sysco's future as a steel producer uncertain until 1987 when the federal government approved financing for Sysco's $275 million mill modernization, which includes the installation of a modern electric-arc furnace. Continuing losses led Nova Scotia to finally sell the plant in 1994 to a Chinese firm.