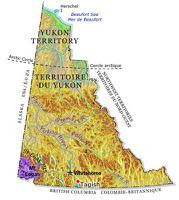 Tagish, Yukon, Settlement, population 391 (2011c), 222 (2006c). Tagish is located at the narrows between Tagish and Marsh lakes on the road between Jakes Corners on the Alaska Highway and Carcross on the road to Skagway. This road was built in 1942 by the US Army as part of the construction of an oil pipeline from Skagway, Alaska, to Watson Lake, YT. The present settlement grew up around a bridge built across the narrows at that time. An earlier community, also sometimes known as Tagish, had been located 3 km south on Tagish Lake.

The name Tagish apparently comes from "Ta-Gish-Ai", a word for "fish trap" and the name of the local First Nations band. During the KLONDIKE GOLD RUSH the North-West Mounted Police operated a post in the community where they inspected the outfits of Klondikers travelling along the lake in boats on their way to the gold fields. Canadian customs inspectors also used the post to collect customs duties. The NWMP called their post Fort Sifton, after Clifford SIFTON, Minister of the Interior at the time.