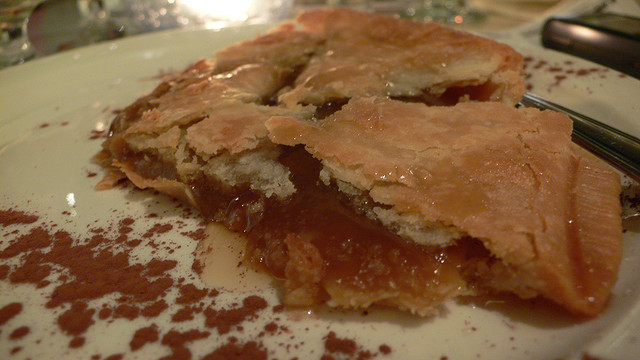 Nearly all of Québec’s earliest immigrants were peasant or artisan settlers who came from the west of France; the culture and cuisine of Québec are almost entirely rooted in that tradition. In 1759, the British conquered the French in Québec and they brought with them the tastes of their mother country. Much of the food known as traditional Québécois fare is an adaptation of already existing recipes that originated in Brittany and England. The French Canadian diet also includes traditional Aboriginal staples such as maize (corn), which in the earliest days was mashed, then frozen and kept through the winter to create habitant pea soup.

The mainstay of Québec cuisine is salt pork because of its tolerance of different climate changes. A rugged and resilient population who learned to survive in extreme climates, French Canadians found countless uses for pork. The fat (lard) is used in all the pastry and many savory dishes. Early recipes include inventive ways to use all parts of the pig. Ragoût de pattes de cochon, for example, is a simple way to eat pig’s feet, which are stewed in cinnamon, cloves and nutmeg, flavors typical in traditional French Canadian cuisine.

The Ubiquity of Maple Syrup

For many early Canadiens, maple was the only form of sugar and was used ubiquitously in every dessert, the most basic of which is maple syrup drizzled on fresh snow. There are countless varieties of maple related desserts. Puddings, of British origin, were adapted to include maple sugar and the famous tarte au sucre is actually a common sweet in France and can be found in almost any patisserie. In Louisiana, the pecan pie is a variation of this tarte, and in Kentucky transparent pie is pecan pie without the pecans. Butter tarts in English Canada are another version of this, sweetened with brown sugar.

What distinguishes the French Canadian version of many of these desserts is the insistence of maple sugar or syrup as the sweetener. Brown sugar, in the earliest days, was a rare product and unavailable in Québec. It has gradually come to replace the maple flavor so tarte au sucre — originally made with maple syrup — now contains brown sugar. However, many desserts, such as tarte au sucre d’érable, have survived in their original form and are often the final chapter in a modern meal.

Like many of the early recipes, this one is fairly simple and uses few ingredients:

Another dish that demonstrates the profound influence of maple syrup, and might be found on a breakfast table in Québec today, is oeufs dans le sirop (eggs in syrup):

Bring syrup to a boil. Break eggs over boiling syrup.

The traditional French Canadian diet is rich in calories with a high fat and sugar content. The high fat was a necessary component for the early Québec settlers so as to survive the harsh elements. The high sugar was also necessary as a counter balance to the brutal conditions of life, a taste of sweet for la joie de vivre.