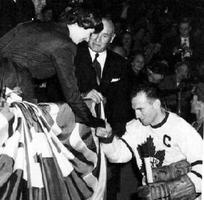 Theodore Samuel Kennedy, Ted or "Teeder," hockey player (b at Humberstone, Ont 12 Dec 1925; d at Port Colborne, Ont 14 Aug 2009). In 1941, at age 16, Kennedy was invited to join the MONTREAL CANADIENS trading camp, but he was so homesick that he left shortly after. A year later he played senior hockey at Port Colborne and officially joined the TORONTO MAPLE LEAFS for the 1943-44 season. His talent shone, and Kennedy - the top scorer that season - helped the Leafs to a STANLEY CUP victory over the Canadiens in 1945.

Hardworking and tenacious, Ted Kennedy typified the powerful, tough checking Maple Leaf teams built by Conn SMYTHE. In 1946 he and players Howie Meeker and Vic Lynn formed the renowned KLM Line, which helped the Leafs to another 3 Stanley Cup victories from 1947-49. In 1948, at age 22, Kennedy became the youngest-ever team captain in Leafs' history and helped the team to another Stanley Cup victory in 1951. Also a fan favourite, Kennedy won the HART TROPHY (most valuable player) in his last full season, 1954-55. Following retirement he operated a thoroughbred training centre in St Mary's, Ont.

Though he lacked skill as a skater, Kennedy was a resourceful playmaker and finished his career with a total of 231 goals and 560 points in 696 games. In 1966 he was inducted into the HOCKEY HALL OF FAME.