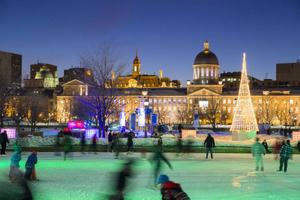 In the spring of 1844, architect William Footner won a MONTRÉAL competition that enabled him to design the new Marché Bonsecours building. The work stretched out from 1844 to 1848, and although the first occupants had settled in by January 1847, the market's opening took place without official ceremony. Merchants occupied the basement level that opened on Rue de la Commune and the ground floor on Rue Saint-Paul.

Due to excess costs beyond those committed (more than three times the initial budget), William Footner was replaced by architect George BROWNE, who would see to it that the work reached a successful conclusion. The exterior dome and peripheries were finished in 1847, and the central hall, modified from the initial project, was completed in 1848. A police station took office in the southwest end of the building in 1848.

Since Montréal had enjoyed the status of capital of the United Province of Canada since 1843, Marché Bonsecours replaced Marché Sainte-Anne, the site of Parliament which had burned down during a Tory demonstration. Then, it was suggested that the new Bonsecours building permanently house the assembly of United Canada, and its architecture supported the idea. Although the city had scarcely 50,000 inhabitants in this period, the Marché Bonsecours project initially made an impression through its great size, spectacular dome and outstanding location - three factors that in all likelihood helped sell the idea. However, in 1849, Montréal lost its capital status, forcing the Marché Bonsecours building to take on a new orientation.

In 1850, the structure's west wing housed municipal offices. The city hall was inaugurated in 1852 embellished with an exterior ceremonial balcony, the pride of Mr. Browne. Then, a concert hall was added in the east wing. Until 1878, the Marché Bonsecours would be a meeting place for all Montréal for performances, concerts - the hall had a seating capacity of 3000 - exhibitions and banquets. As for the market itself, the stairs connecting the stalls and storerooms gave it a more permanent vocation. The portico in front of Rue Saint-Paul was completed in 1860, while the cast iron columns awaited their calling for more than twenty years at the foundry in the St-Mary's suburb of Québec. The initial drawing had anticipated a similar portico opening onto the river; however, this idea was abandoned.

In 1846, the Canadian Institute became the first tenant at the Marché Bonsecours to celebrate the great June 24 SAINT-JEAN-BAPTISTE festivities, and beginning in the 1850s, some local militia used the space on the upper floor. In 1888, the market lost its cultural functions in favour of other buildings scattered throughout the city centre. The city hall and police station closed their doors in 1878.

The market itself continued to extend to Champ-de-Mars, even across Place Jacques Cartier, its fame earning it the name Grand Marché Central. Until the 1960s, all grocers and restaurateurs did their shopping there. In 1948, a major fire destroyed the Marché Bonsecours building, which lost its superb dome through this tragic event. Unhappily, other fires occurred over the following years, causing the market to close its doors completely in 1963.

The city then suggested completely demolishing the Marché Bonsecours, to the great displeasure of the population, who, on the contrary, insisted on its reconstruction. Since the Vieux-Montréal area was undergoing restructuring, Marché Bonsecours' historic character was highlighted and its reconstruction accepted. A metal dome - a copy of the original - was rebuilt, the interior walls were erected with reinforced concrete, and the façade was restored. Public service officials occupied the premises until 1990, when the Marché Bonsecours again took on its public function. For the 350th anniversary of Montréal's founding, the entrance hall was refashioned in its original image, and exhibits covered the walls. The ground floor reclaimed its commercial purpose, enabling numerous artisans to operate arts and crafts boutiques. In 2004, new restoration projects again permitted the market to open its doors, which had been closed for decades. In 2001, a new balcony facing the port was added and all the architectural lighting refurbished.

Today, as headquarters for the Conseil des métiers d'art du Québec, Marché Bonsecours is the ideal platform for artisans in fashion, jewellery creation, furniture and object design. Its numerous restaurants favour local products with a historic tone, and the many rooms for rent on the upper levels are the delight of various cultural and private functions. In winter, a skating rink decorates the façade overlooking the river, adding a nostalgic and romantic note to this lovely heritage building on cold winter evenings.