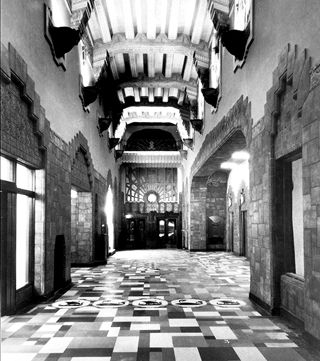 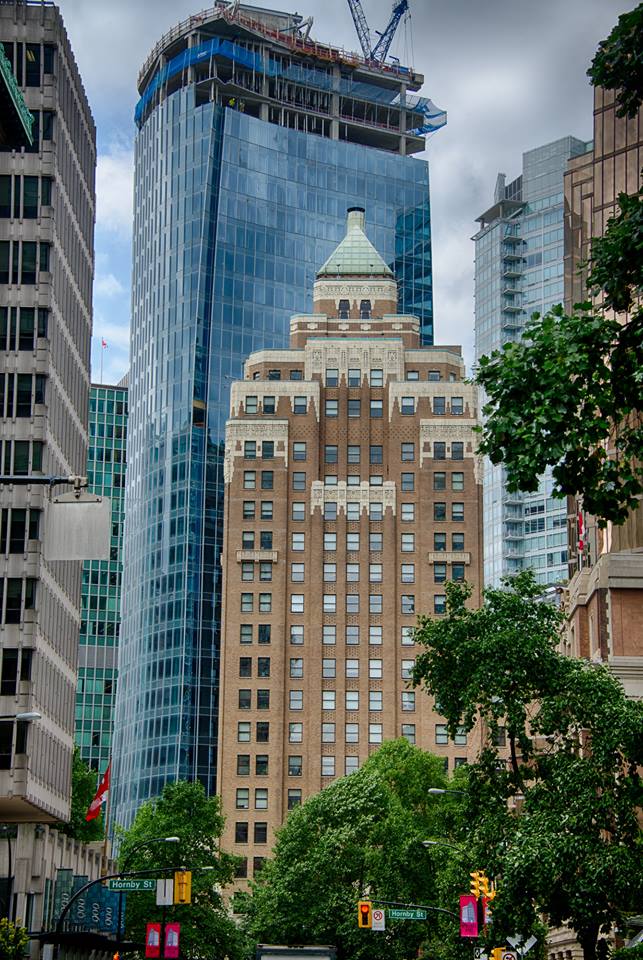 The Marine Building has dominated its location in Vancouver's business core since it opened. The tower of the 21-storey building rises above a 4-storey podium with a narrow setback on the Hastings Street side and a 10-storey wing along Burrard Street. A hip-roofed penthouse caps the gradual setbacks of the tower. The curtain walls, which cover a steel frame with concrete floor slabs, are mainly pinkish-buff brick, combined with terra cotta, and are heavily loaded with terra cotta bas-relief ornaments (in pink and green, with gold highlights). Rich terra-cotta ornament also decorates the higher reaches of the building along the parapets at every setback.

Vancouver's position as a sea and rail connection is highlighted in the decorative ornamentation. Terra-cotta panels near the base depict the history of transportation and the discovery of the Pacific Coast, and a frieze with waves, sea horses and marine fauna appears above the ground floor around both fronts of the building. The Burrard Street entrance, contained within a series of receding arches, is equally adorned; a ship's prow sails out of the sunset and Canada geese fly across the rays. The arches themselves are festooned with a burst of marine growth. Scallops, swirls and zigzags continue the Art Deco treatment in the bronze grilles.

The extravagant approach to decoration was extended by the designers to the lobby (now somewhat altered by a renovation carried out in 1982-89 by Paul Merrick, Architect), where green and blue tiled walls, beamed ceiling and colourful abstract floor tiles appeared more dramatic with the help of indirect lighting concealed behind wall sconces shaped like ships' prows. Above the main entrance, in plaster work by Giles Holroyd, a Viking ship crashed against the waves.

When it opened in 1930, at a cost of $2.3 million ($1.1 million over budget), the Marine Building was the talk of the town. Uniformed doormen stood by the massive brass doors opening onto the lobby and sailor-suited women waited to escort passengers in 5 high-speed elevators, the walls of which were inlaid with 12 varieties of British Columbia hardwoods.

Over the years extensive restoration of the exterior masonry has been carried out to reverse deterioration. The Marine Building has been designated a historic resource by the City of Vancouver and restrictions placed on the alteration or demolition of any aspect of its exterior. (See also MCCARTER NAIRNE, SKYSCRAPERS, 1914-1967, ARCHITECTURAL HISTORY and HERITAGE CONSERVATION.)