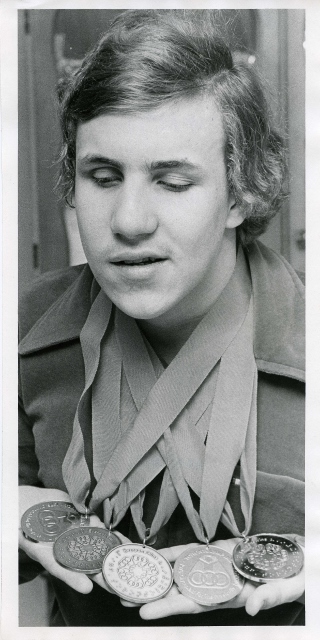 Tim McIsaac was born in Winnipeg, Manitoba, on 10 January 1959. Blind since birth, he was sent to the Ontario School for the Blind — now called the W. Ross MacDonald School — in Brantford, Ontario (at the time, blind children from Manitoba, Alberta and Saskatchewan were sent to Ontario to be educated at the Brantford school). From the age of six, McIsaac would spend 10 months of every year living in residence at the school, far from his family in Manitoba. “The hardest part for me was at the beginning, when I was very young,” he remarked in a June 2015 interview with The Canadian Encyclopedia. “I was homesick a lot.” His father would visit whenever business trips took him to nearby Toronto, but otherwise contact with his family was limited to a telephone call every other week.

McIsaac participated in several sports through the physical education program at the school, including running and a number of team sports. However, the team sports tended to be dominated by kids with partial vision, and according to McIsaac, he was “not the fastest runner.” As someone with a strong competitive drive, he therefore focused on freestyle wrestling.

According to Tim McIsaac, he only really started swimming at the age of 13. One of the things that drove him to focus on swimming was an accident he suffered in 1973:

On 1 September 1973, I was hit by a car while walking down the road with a friend at his parents' cottage. I sustained fractures to both legs and a compound fracture to my right leg in particular. I had to be transported back to Winnipeg by ambulance and spent six days in the hospital before recovering at home for four months; [for three of those] my right leg was in a cast. I didn't return to school until after Christmas, at which time I was prohibited by way of doctor's orders from participating in any running or contact sports.

However, McIsaac was allowed to continue swimming and soon found that he excelled in the pool. Facilities at the Ontario School for the Blind were not ideal — students were only able to practise three times a week, in 45-minute sessions at a pool that was not always open or available. McIsaac later commented that it simply did not compare with the conditions found at swim clubs for sighted athletes.

Despite the relatively poor training conditions in Brantford, Tim McIsaac excelled in his first major competition, the inaugural Ontario Games for the Physically Disabled in June 1975, which were held in Cambridge, Ontario. Although he had only been swimming for three years by that point, McIsaac won five gold medals at the Games.

About a week after the 1975 Ontario Games, McIsaac returned home to Winnipeg and started training with coaches Kevin Hill and Tony Fraser at the Cardinal Swim Club. His experience with the club convinced him that the next school year (1975–76) would be his last at the school in Brantford. The public school system in Manitoba had integrated by this point, and McIsaac decided that he would complete high school in Manitoba, where he would also have access to better facilities and coaching.

In the meantime, he had one more year of residence at the Brantford school. McIsaac trained hard that year, as he was determined to make the Canadian team for the 1976 Olympiad for the Physically Disabled (now known as the Paralympic Games).

1976 Olympiad for the Physically Disabled

Tim McIsaac’s determination paid off when he was chosen to represent Canada at the 1976 Olympiad for the Physically Disabled in Toronto, Ontario. At the competition, his first Paralympic Games, he won one gold, two silver and two bronze medals.

In recognition of his success at the 1976 Games, McIsaac received the Viscount Alexander Award for Canada’s most outstanding junior male athlete of the year. “I was really surprised,” recalled McIsaac. “I remember coming home from school on my 18th birthday and my dad telling me they’d had a phone call that I’d won. I remember thinking, ‘I’m not really an athlete.’”

By the time Tim McIsaac learned that he had been voted junior male athlete of 1976, he was living and training back in Manitoba. In September 1976, he had started his final year of high school in an integrated school in Winnipeg, his hometown. He had also begun training with coaches Wilf and Audrey Strom of the St. James Seals Swim Club in the Winnipeg district of St. James-Assiniboia. They would work together for 16 years, and the Stroms would eventually coach the National Blind Team at the Paralympics (Audrey Strom, who was officially the team’s Technical Director, also wrote Swimming for the Blind, a coaching manual published by the Canadian Blind Sports Association in 1985).

Through their work with McIsaac, the Stroms developed a system known as “tapping”: the technique involves tappers who stand at the ends of the pool and touch or tap the visually impaired swimmer using a foam-tipped rod as they near the wall. This allows swimmers to train more effectively and to reach their optimum performance level, while also protecting them from injury. The system, which is now compulsory in competition, helped McIsaac become the first blind swimmer to use the tumble or flip turn.

McIsaac retired from competitive swimming in 1992, but has since competed in triathlons and in masters swimming. “Tim [...] is a very competitive person,” coach Audrey Strom commented in a 2013 video marking his induction into the Canadian Paralympic Hall of Fame. “He likes first and he doesn’t like second.”

As one of the most decorated Canadian Paralympians and the first blind swimmer to use the tumble turn, Tim McIsaac is both a pioneer and a role model. His success, and that of teammate Michael Edgson, helped lay the groundwork for future stars of the pool, including Donovan Tildesley, Valérie Grand'Maison and Amber Thomas.

For McIsaac, swimming was important in a broader sense. “I’m grateful for the opportunity that swimming gave me,” he told The Canadian Encyclopedia in 2015. “I trained with able-bodied people, which got me into the sighted world. It enabled me to live as a person who is blind rather than as a blind person.”

Moreover, his experience training and performing at international competitions gave him valuable life lessons, ones he could apply in his later career. “Swimming helped me build the kind of character you need and the resilience you need for the world of work, particularly as someone with visual impairment.” Overall, he hopes his success will show people that “they should dare to dream and take risks.”

Tim McIsaac has volunteered on boards and committees of such organizations as theNational Education Association of Disabled Students (NEADS),the Misericordia Health Centre Foundation, the City of Winnipeg Access Advisory Committee and one of the Community Health Advisory Councils of the Winnipeg Regional Health Authority (WRHA). A Freemason, he has served in both his local lodge and the Grand Lodge of Manitoba. He is also a member of the Order of the Eastern Star, a related organization that is open to both men and women.