In the end, the loony Smallwood scheme came to nothing.

This article was originally published in Maclean's Magazine on October 7, 1996

In the end, the loony Smallwood scheme came to nothing.This article was originally published in Maclean's Magazine on October 7, 1996 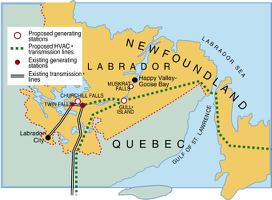 Joey Smallwood's clock was always ticking. Never more so than 30 years ago, when it seemed that the Newfoundland premier's grand scheme to seek economic deliverance by developing the vast hydro power potential of Labrador was dead in the water. There was no buyer, for starters. And the Quebec government would not sign a deal to provide a right-of-way for Labrador power to reach New England. Smallwood, trying to save his hard-luck province, was desperate enough to consider an alternative route that would have required a feat of pure engineering magic - running a power grid across the waters to Newfoundland, continuing down the west side of the island and across the Cabot Strait to Nova Scotia, then on through New Brunswick into the New England states. "We called it the White Anglo-Saxon Protestant Line," recalls Eric Kierans, now retired in Halifax, then a member of the Quebec cabinet during the Labrador power negotiations. "I don't know if anyone really took it seriously."

In the end, the loony Smallwood scheme came to nothing. But as it turned out, the deal that Smallwood eventually signed with Quebec in 1969 to develop the Churchill Falls hydroelectric project was spectacularly one-sided - with events conspiring to allow Quebec to reap a multibillion-dollar windfall while Newfoundland made do with ever-dwindling profits. Last week - in a very public campaign that fuelled anti-Quebec sentiments even as it raised his own already-high profile - Brian Tobin became the latest in a succession of Newfoundland premiers to try to right this perceived historical wrong. "It isn't fair. It isn't moral. It isn't decent," is how he described the Churchill Falls pact in an interview with Maclean's

Under that agreement, Newfoundland agreed to sell Labrador power to Hydro Quebec with no price increase for 65 years - even though Kierans says Quebec would have been more than happy with a 20- or 30-year contract. The ink had hardly dried before the Middle East energy crisis and galloping inflation caused prices to soar. According to Newfoundland government figures, Hydro Quebec pocketed $14 billion between 1976 and 1995 by reselling Churchill Falls power to customers in the United States, compared with the $2 billion in net profit earned by the Newfoundland government. Although Hydro Quebec officials declined to release precise profit figures, they said last week that Tobin's numbers are exaggerated.

Newfoundland has fought two unsuccessful court challenges against the agreement, most recently in a case put before the Supreme Court of Canada in 1988. The courts ruled that a contract is a contract. With little legal recourse left, it is no surprise that the silver-tongued Tobin - who, as federal fisheries minister, emerged as a national hero for facing down Spain during the 1995 turbot war - intends to plead his case before the court of public opinion, with a cross-country speaking tour that starts in Montreal on Oct. 15. "There is no scenario under which Newfoundland will subsidize the province of Quebec for the next 40 years," says Tobin. "If Mr. Bouchard thinks that's on, he is making a great mistake."

Tobin's public relations offensive had immediate national reverberations. Publicly, both Prime Minister Jean Chrétien and federal Natural Resources Minister Anne McLellan declared Ottawa neutral in the dispute and said that it was up to the provinces or the courts to work it out. Privately, though, they cringed at the way Tobin's campaign seemed to be whipping up anti-Quebec feelings - the Reform party, for one, demanded that Ottawa hold back transfer payments to Quebec unless it reopened negotiations with Newfoundland. For the government, the timing proved unfortunate, coming in the same week that Justice Minister Allan Rock announced that Ottawa will ask the Supreme Court of Canada to rule on Quebec's right to secede under the Constitution. As one prominent Liberal adviser put it: "Raising regional tensions right now helps no one."

In Quebec City, meanwhile, Tobin's latest crusade met with disdain. Quebec Premier Lucien Bouchard, among others, pointed out that his province took a risk when it invested in Churchill Falls in the first place and had no reason to apologize for the profits it reaped in doing so. He also urged Tobin to observe "the rule of law." But as the famous turbot war demonstrated, Tobin is not one to be deterred by legal niceties. Then there is the matter of Tobin's widely speculated desire to succeed Chrétien. "That is nonsense," he says when asked if he is simply grandstanding to raise his public profile. "If I had further federal ambitions, I would have stayed in Ottawa." Perhaps. But the battle over Churchill Falls promises to make him a hero at home - while still keeping him firmly ensconced in the national spotlight.