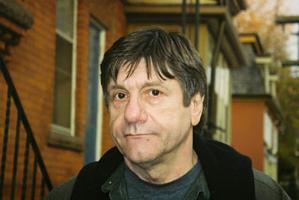 Once at the vanguard of Canadian naturalism, Tom Walmsley's career crosses and mixes genres and styles (photo courtesy Emily Gerhard).\r\n

Thomas Walmsley, playwright, novelist, poet, librettist (born at Liverpool, Eng 13 Dec 1948). Tom Walmsley immigrated to Oshawa, Ont, in 1952, moving to Lorraine, Qué at age 16 and then to Vancouver in 1967. A high-school dropout, recovering alcoholic and one-time heroin addict, Walmsley developed his craft at Vancouver's New Play Centre in the mid-1970s to become the Canadian theatre's foremost chronicler of the lower depths.

Walmsley has made a powerful impact with such brutally naturalistic plays as The Jones Boy (1977), Something Red (1978) and the comedy White Boys (1982), which won a Chalmers Award. These works describe an urban subculture self-victimized by violence, drugs and alcohol. Most significant among the plays written after a move to Toronto in 1983 are 3 Squares a Day (2006), an absurdist satire of the pseudo-religious political right, and Blood (1999), an unflinching drama following a brother and sister, both desperately lost but ultimately loving, while they negotiate their mutual addictions and sexual desire for each other.

In 1979, Tom Walmsley was the first winner of Arsenal Pulp Press's 3-Day Novel Contest for Doctor Tin, an underground hit and a story densely packed with some of his most recurrent themes: interpersonal violence, "alternative" sex (sado-masochism, homosexual acts and the sex trade), romantic obsession, and class difference articulated by clashes between criminals and police. His third novel, Kid Stuff, touches on all of these but, focusing on several troubled teenagers living in rural Canada, is more delicately drawn and psychologically detailed than the film-noir-on-speed style of Doctor Tin and its almost surrealistic sequel, Shades. Dog Eat Rat, published in 2009, combines these styles to follow its characters private investigators and the privately investigated through their interconnected and spiritually fraught romances.

Between achieving sobriety and, decades later, receiving a last-minute, life-saving liver transplant from fellow playwright Michael HEALEY, Walmsley experienced a religious awakening that led to his conversion to Catholicism. While his subsequent work indicates no waning interest in matters of the flesh, nor a more establishment-friendly moral code, it does feature prominently his relationship - often problematic - with God.

Walmsley's driving struggle (post-alcohol) is in trying to reconcile the demands of the body and the demands of the soul. He never finds a happy resolution. His first libretto, Julie Sits Waiting, produced in 2012, expresses this struggle through a tragic affair between a married woman and a priest. The experimental electroacoustic opera was scored by Louis Dufort and described by The Globe and Mail as "Tosca during an acid trip."

The themes of God and sin also run through the book of poetry What Happened, published in 2007. Walmsley's poetry tends to revolve around narrative, often refuses to let itself be read as metaphor, and incorporates, as does most of his writing, a sharp sense of humour at unexpected moments.

He has written plays, books of poetry, novels and the screenplay for the film Paris, France (1993), directed by Jerry CICCORITTI. His stage play Blood was adapted for the screen and also directed by Ciccoritti. Once at the vanguard of Canadian naturalism, Tom Walmsley's career crosses and mixes genres and styles while remaining consistently content-driven and remarkably self-revealing.