The Royal airship R-100 flies over the Canadian Bank of Commerce, the tallest building in the British Empire at that time, circa 1930 (courtesy City of Toronto Archives/Series 1, Item 921). 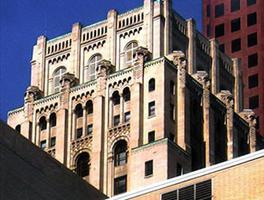 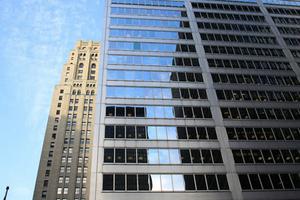 "Calling Home from the Tallest Building in the British Commonwealth"

Called by one architectural critic "Still the best bank building and the best office tower in the city," the 34-storey Canadian Imperial Bank of Commerce was from 1931 to 1962 the tallest building in the British Commonwealth. Gliding upwards in a series of subtle setbacks from a Romanesque base of seemingly solid stone, the building recalls the glamour of a past era in high finance. The grand banking hall, roofed with a gilded, light blue barrel vault, evokes an almost religious reverence.

Now dwarfed by everything around it, the Canadian Bank of Commerce building at 25 King St. W. dominated the Toronto skyline for 3 decades. A popular outdoor observation gallery (now closed) on the 32nd floor - guarded by great carved Babylonian heads with flowing beards - predated the CN TOWER in giving the public unobstructed city and harbour views. From a phone booth up there, you could call home "from the tallest building in the British Commonwealth."

With a new building boom raging across the country beginning in the 1950s, the Bank of Commerce head office soon lost its claim as "tallest." While other historic buildings on the corner were demolished to make way for new modernist symbols, the now Canadian Imperial Bank of Commerce showed a rare concern for heritage preservation when building its Commerce Court complex beside it in 1968-1972.Commerce Court West, designed by I.M. Pei in the International Style at its most precise and unadorned, rises from a transparent three-storey glass base.

Commerce Court West was the tallest stainless steel building in the world upon its completion in 1973. (See alsoSKYSCRAPERS.)