The CN Tower under construction, just prior to the addition of the pod, circa 1974 (courtesy Toronto Star). 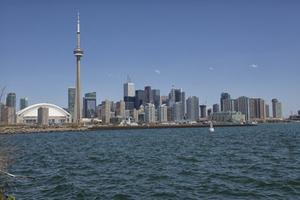 The CN Tower retains its stature as a symbol of Toronto, 2012 (photo James Marsh).
PreviousNext

On 2 April 1975, Torontonians looked up in amazement as a giant Sikorsky Skycrane helicopter placed the final piece of the CN Tower's antenna into place, officially making it the world's tallest free-standing structure.

The 553-metre-high communications tower was built by Canadian National Railways so that TV and radio broadcasts could be clearly transmitted over the tall skyscrapers being erected throughout downtown Toronto. The tower immediately became the city's most popular tourist attraction and a visual icon recognized throughout the world. Six glass-faced elevators travel at 22 kilometres per hour to reach the observation levels in 58 seconds. A revolving restaurant in the Sky Pod makes a complete rotation every 72 minutes, giving diners a changing view of Toronto more than 351 metres below.

The CN Tower also catalyzed the redevelopment of the vast and isolated industrial Railway Lands into a tourist mecca along with the Metro Toronto Convention Centre, Rogers Centre (formerly SkyDome), Skywalk, Ripley's Aquarium of Canada, and Roundhouse Park. On a clear day, visitors to the CN Tower's highest observation deck can see more than 160 kilometers, all the way to Niagara Falls and across Lake Ontario to New York State. In 1995, the CN Tower was classified as one of the Seven Wonders of the Modern World by the American Society of Civil Engineers.

Although it has been surpassed as the world's tallest freestanding structure by towers in China and Japan, and by a skyscraper in Dubai, it remains the tallest tower in the Western Hemisphere.