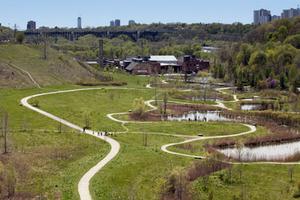 The great cavern created by the excavation of clay is today an environmental preserve (photo James Marsh). 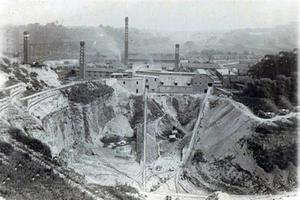 Clay pit at the Don Valley Brickyard (photo by Diamond and Schmitt Architects). 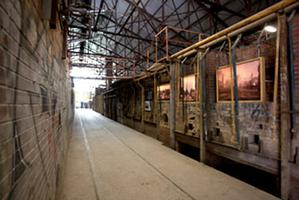 In the spring of April 1882, William Taylor and a helper were at work building a fence on his farm in the Don Valley. He noticed that the clay from the postholes seemed of an uncommonly fine quality. He packed some in two small cigar boxes and took it to a small brickyard farther down the valley. "These will bake red," Taylor told the brick maker. "They certainly will not!" the man replied. When Taylor returned a day or two later, the proprietor admitted that indeed the bricks had baked cherry red.

Taylor and two brothers opened the Don Valley Pressed Brick Works (see Evergreen Brick Works), which over the years became the source of 43 million beautiful red bricks that built so many of Toronto's houses and famous buildings, such as Massey Hall, Casa Loma, the Ontario Legislature buildings, Toronto General Hospital and Convocation Hall at the University of Toronto.

As the workers excavated clay from what became a massive pit, they uncovered layers of shale revealing a geological record stretching back two million years. The plant closed in 1984.