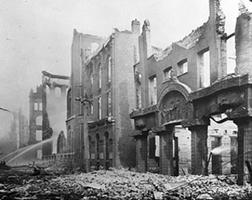 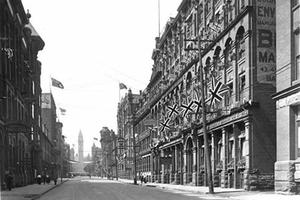 Bay Street looking north, from almost the same spot as the post-fire photograph, from just north of Front Street, circa 1902 (courtesy City of Toronto Archives/Fonds 1568, Item 459). 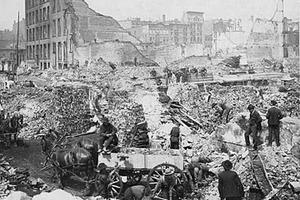 On the evening of 19 April 1904, a watchman noticed flames in an elevator shaft of the E&S Currie Building at 58-60 Wellington Street West. The blaze spread quickly, cutting a path of destruction in an area roughly bounded by Simcoe, Melinda, Yonge and the rail lines. Firefighters from as far as Buffalo, New York, fought the blaze.

The cause of the fire was never determined. Initial suggestions included faulty wiring or a stove left burning. By the time it was discovered, the building was lost and the fire was spreading. It left important blocks of downtown TORONTO in ruins.

Over the next few weeks, safecrackers rescued important documents from the ruins, as demolition teams brought down the damaged buildings. John Croft, a recent immigrant from England, was assigned to dynamite the W.J. Gage Building at 54-58 Front Street West. His team had no storage battery to detonate the charges and had to light long fuses before running for cover. This worked for two explosions Croft set on May 4. The third attempt appeared to fail, so Croft investigated. The blast went off, fatally injuring him. A mural along the downtown street named after Croft tells the tale of the only person killed by the fire, albeit indirectly.

While the fire cost one life, 5000 workers lost their jobs. Business owners, insurance companies and the city worked fast to rebuild and a year later, with new fire-resistant construction standards in place, a new city core had risen from the ashes.