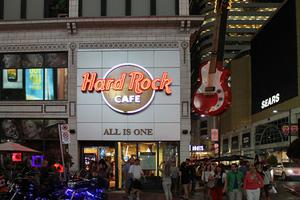 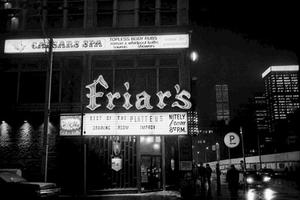 From 1963 to 1976, Friar's Tavern served as one of the Yonge Street strip's most popular nightclubs. When it opened, the tavern boasted that it featured "the finest in food." But its musical offerings were truly superb, ranging from jazz great Oscar Peterson and rock legends Bill Haley & the Comets to local heroes Levon and the Hawks, whose presence at the club brought Bob Dylan to town.

In 1965, Bob Dylan's world was a-changing. He'd already recorded his electric masterpiece "Like a Rolling Stone" and performed his plugged-in set at the Newport Folk Festival. But he needed his own backup band. Enter Mary Martin, a Toronto woman who was working for Dylan's manager in New York. At Martin's urging, Dylan flew to Toronto on September 15 to check out her favourites, Levon and the Hawks, at the Friar's.

He first heard them play on the morning of September 16 and for the next two nights, Dylan and the group rehearsed after hours and forged a thrilling, hard-edged sound. After touring the world with Dylan, and making a return appearance at Toronto's Massey Hall in November, Levon and the Hawks relocated to Woodstock, New York, and became famous as The Band. With Dylan, they went on to generate bestselling albums and a sold-out North American tour in 1974 that included two nights at Toronto's Maple Leaf Gardens. But their fruitful partnership had begun at Friar's Tavern, an event that Time magazine declared "the most decisive moment in rock history."