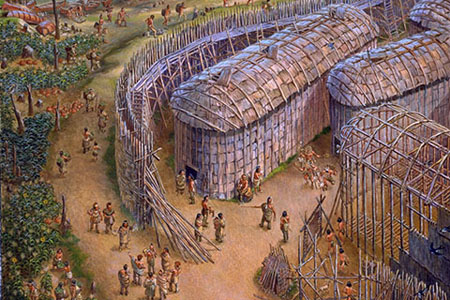 Artist's depiction of a longhouse village, likely very similar to Teiaiagon on the banks of the Humber River (artwork by Lewis Parker, The Canadian Encyclopedia). 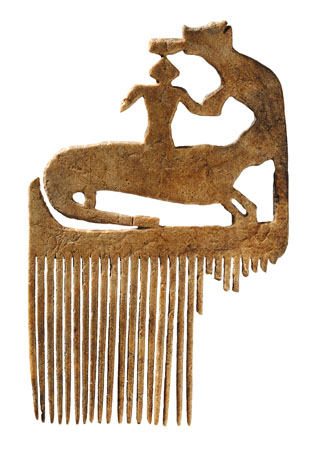 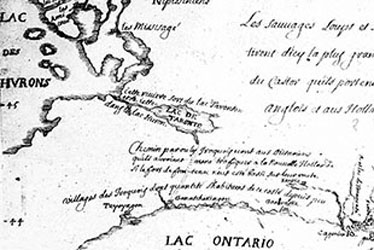 During a renovation in 1999, workers digging a trench for a natural gas line at Baby Point uncovered the remains of two young Seneca women. Among the items discovered with their remains was a moose antler comb delicately carved with spiritual references. This artifact and others revealed the site of Teiaiagon, a Seneca village of the 17th century.

Teiaiagon was built by the Five Nations Iroqouis in the 1660s or 1670s, after they defeated the former inhabitants of this area, the Huron-Wendat. It was strategically situated on the summit and slopes of a large promontory overlooking the main channel of the Humber River. The site was a natural ford for canoeists, as the river was not navigable much farther upstream. And it was a perfect place to control movements up and down the Carrying Place Trail, which made its way from Teiaiagon to Lake Simcoe.

In 1680, French explorer René-Robert Cavelier, Sieur De La Salle visited the village, which was surrounded by corn fields and which housed hundreds of people in dozens of longhouses. In the changing occupation of the site, the Seneca village lasted some 20 years. It was likely preceded by the Huron and followed by the Mississauga, an Anishnabe people.

The remains of Teiaiagon were investigated by archaeologists in the late 19th and early 20th century. Beginning in the 1910s, the area was developed as an exclusive residential neighbourhood. Then and since, artifacts from Teiaiagon have consistently been unearthed. After the discovery of the Seneca grave site in 1999, both women were reburied nearby along with a number of objects meant to accompany them to the next world, including the exquisite moose antler hair comb whose carved representation of a panther with a rattlesnake tail, transforming into a bear and then into a human shape, evokes shape shifting and transitions from one world to another.