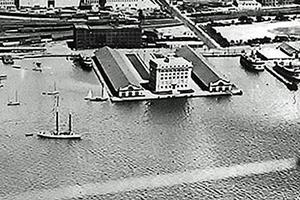 An aerial view of the Toronto Harbour Commission Building, circa 1918, when it was on the harbour (courtesy City of Toronto Archives/Fonds 1244, Item 920). 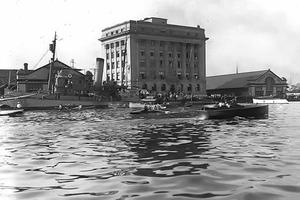 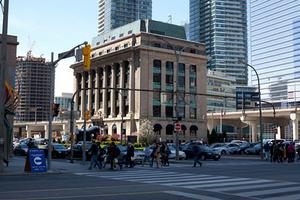 Once upon a time, Harbour Street lived up to its billing--it ran close to Toronto's shoreline. Thanks to the work of the Toronto Harbour Commission, the name has not made sense for decades.

Established following a city referendum in 1911, the Toronto Harbour Commission was placed in charge of the waterfront. Over the next two decades it extended the city south into the lake through lakefilling that created Queen's Quay, the Portlands and Bathurst Quay. Later the commission created land near Hanlan's Point that became the Island airport.

The commission, and its successor the Toronto Port Authority, have operated out of 60 Harbour Street since it was built on the end of a pier, surveying the harbour, in 1917. Since then the building has not moved, but the shoreline has.

The agency remains responsible for marine activities in Toronto Harbour, though it has been embroiled in controversies over the future of the Island airport, still operated by the Port Authority.