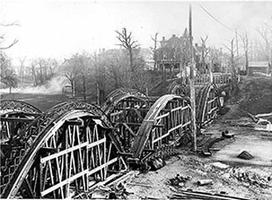 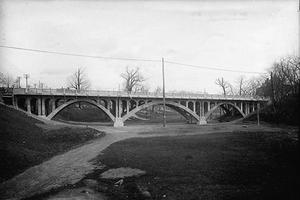 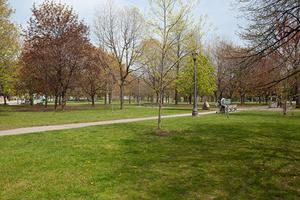 Looking east towards Crawford Street along the buried creek and bridge, circa 2012 (photo \u00a9 by James Marsh).
PreviousNext

In 1884, among pressing municipal affairs was the matter of Garrison Creek and its potentially harmful impact. Its condition, and demands from constituents to bury the creek, led Mayor Arthur Boswell to declare that burying it was "a most necessary work" because of its role in draining parts of the city, "but also in the cause of health, for this creek is nothing more than an open sewer, and has become a nuisance to those residing near it."

Garrison Creek was the largest watercourse between the Don and HUMBER rivers. It took its name from its proximity to the garrison at FORT YORK, where the steep walls of the ravine provided natural protection for the fort's flanks. During the first half of the 19th century the stream was known for its clear water and salmon fishing. As the city grew, industries and residential areas rose along it, which led to pollution.

Work began in 1884 to bury it and channel the creek into a sewer system. Large portions of the creek's ravine were also filled in and bridges that spanned the ravine were encased, leading to oddities like the bridge buried under Crawford Street at the north end of Trinity-Bellwoods Park.

The Garrison Creek sewer was expanded in 1912; it gained a larger main conduit running from Bloor Street to the High-Level Interceptor at Adelaide Street. The last major open section was filled in shortly before the First World War.

Although the creek is no longer visible, it is still evident in the way it shaped what was to come. The line of parks that meanders through the neighbourhoods of the west end from Christie Pits to Stanley Park, and from Dufferin Grove to MacGregor Park to Bellwoods, anchors those neighbourhoods. These modern neighbourhoods are defined as much by the creek's previous existence as by its absence.