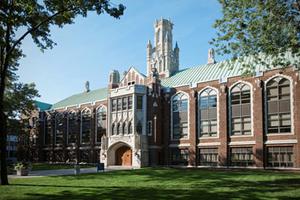 The University of Windsor in WINDSOR, Ont, was founded in 1963. The university began as Assumption College, founded in 1857 by Reverend Pierre Point (pastor of Assumption Parish) to provide a liberal education. In 1858 it received its charter. It was directed by various Catholic religious orders until 1919, and its curriculum consisted of courses primarily designed to prepare students for theological seminaries. It was affiliated with London's Western University (UNIVERSITY OF WESTERN ONTARIO) from 1919 until 1953. In 1956 it became Assumption University, and affiliated with the non-denominational Essex College which provided courses in science, mathematics, physics, geology, nursing, and business administration. Holy Names College for women, which had moved to the campus in 1950, merged with Assumption University in 1962. Also in 1962, Assumption University became the University of Windsor and was incorporated by the province. In 1963 and 1964 affiliation agreements were made with Holy Redeemer College, Canterbury College (Anglican) and Iona College (United Church).

The university has 140 undergraduate and graduate programs in the faculties of arts and social sciences, science, business, education, engineering, human kinetics, nursing, law, and graduate studies; each faculty is subdivided into a number of departments and schools, including the schools of social work, computer science, dramatic art, music, and visual arts.

In 2011 the University announced plans to expand the campus into Windsor's downtown core, and in the fall of 2012 it opened the Ed Lumley Centre for Engineering Innovation, the new home of the Faculty of Engineering on the main campus. This 300 000-square-foot building features a 20 000-square-foot Industrial Courtyard, which is the flagship of several joint industry/academic research spaces across campus.

The university's motto is "Bonitatem, Disciplinam, Scientiam" ("Goodness, Discipline and Knowledge") and its colours are blue and gold. Enrolment is approximately 16 000 full-time and part-time students and it boasts more than 100 000 alumni world-wide.