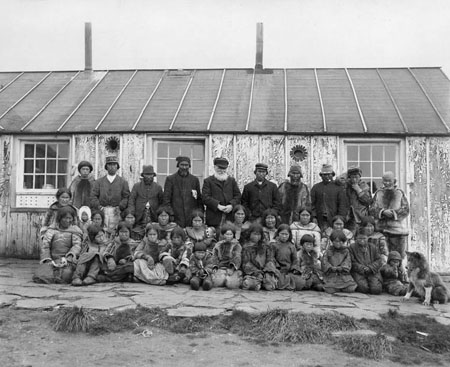 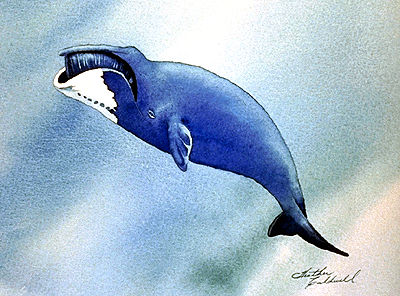 Over exploitation of the bowhead whale led to measures to protect it in 1937 (artwork by Heather Caldwell). 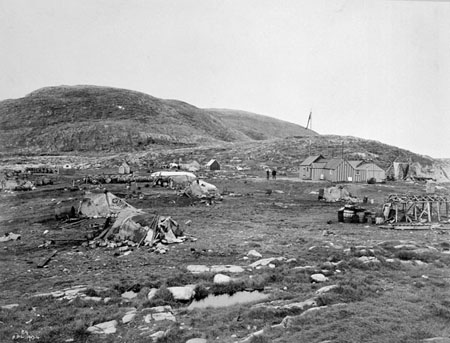 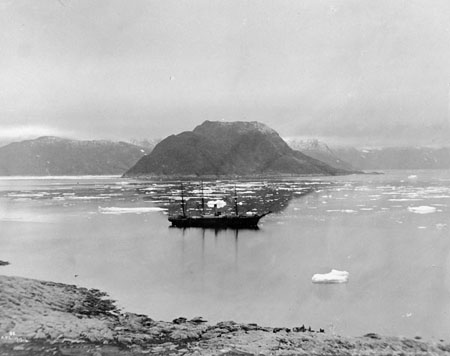 In 1840, the young Inuk Eenoolooapik (also spelled Inulluapik) guided whaling captain William Penny into Cumberland Sound off Baffin Island. The Inuit had harvested bowhead whales in Cumberland Sound for centuries, and it now became a nexus of Eastern Arctic commercial whaling. Scottish and American ships poured in, and so did many Inuit from surrounding regions. The area around Uummannarjuaq, or Blacklead Island, was one of two main whaling bases in Cumberland Sound. From the 1840s to the 1930s, generations of Inuit met and interacted with newcomers on this island.

Uummannarjuaq, which means "like a big sea mammal's heart," had long been an Inuit seasonal campsite. The island attracted whalers because of its strategic location close to the floe edge--the boundary between shore ice and open water where the spring whale hunt took place. As many as 30 ships visited Cumberland Sound each year in the 1850s and 1860s, and many crews stayed through the winter. American and Scottish whalers built wooden houses on Uummannarjuaq, establishing it as a permanent station. However, whaling companies soon realized that it was far easier and more profitable to contract out the whale hunt to local Inuit. They began leaving just one or two employees at the whaling stations. Inuit families led the hunt and did most of the processing and maintenance work. Ships arrived in the summers to pick up whale products and to replenish station supplies. Companies also diversified into trading for seal oil, furs, and ivory.

The population of Uummannarjuaq fluctuated during the whaling period. By the 1870s, the bowhead whale population seems to have dropped, and many Inuit families visited the island only seasonally. People concentrated there again around the turn of the 20th century, when whale prices were so high that a single whale was enough to justify a ship's voyage. In 1909, the German explorer Bernhard Hantzsch recorded 168 Inuit living around Uummannarjuaq, 19 of them with foreign fathers.

In 1894, Anglican missionaries chose Uummannarjuaq as the site of the first permanent mission in Cumberland Sound. Their first church, made of seal skins by local Inuit, was eaten by hungry dogs. Reverend Edmund Peck (Uqammak) persisted in his efforts, and taught the Inuit a syllabic writing system adapted for Inuktitut. His converts would later spread syllabic writing and Christianity throughout the region. The mission became a popular gathering place, where people met to pray and study the Bible, and also to smoke tobacco, play games, look at picture books, and make music.

Uummannarjuaq was often home to joyful celebrations, especially when a whale was brought in, but it could also be a place of hardship. It was difficult to supply such a large camp and its dogteams with meat, especially during fall freeze-up and spring break-up. There were sometimes shortages of food and fur clothing, and many Inuit fell ill from diseases brought in on ships. Considering the vast profits made by whaling companies, most Inuit and non-Inuit whalers were very poorly compensated for their labour.

By the time of the First World War, only one foreigner, the Scottish trader James Law, was still living on Uummannarjuaq. When ships failed to arrive to replenish his stock of trade goods, the Inuit kept him alive. Most families left the station around this time, dispersing to smaller camps around Cumberland Sound and beyond. The bowhead whale population had been decimated. In 1921, one last whale was towed into Uummannarjuaq, but the commercial whaling period was over. The Hudson's Bay Company opened its store in Pangnirtung that same year, and operated a small trading outpost at Uummannarjuaq intermittently for the next decade. The Inuit, who had always been whalers, reoriented themselves to a way of life without bowhead whales.

Today, the bowhead population is recovering and a small number of Inuit-led hunts occur in Nunavut each year.

Uummannarjuaq was designated a national historic site in 1985, because of its importance as an Eastern Arctic whaling station and overwintering site from the 1860s until the early 20th century, and because of the large Inuit camp located there during this early contact period.