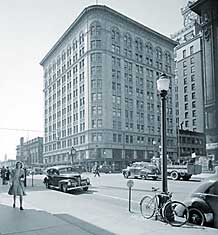 The Birks building in 1946, looking east on Georgia Street.

The Montreal-based Birks jewelry chain moved its Vancouver store into the ten-storey downtown location on November 8, 1913. It had been located on the northeast corner of Granville and Hastings since 1906, when Birks bought out George Trovey’s jewelry store and adopted his trademark street clock as its own.

The grand downtown store, located across Granville from the elegant old Hotel Vancouver and across Georgia from the Beaux Art Hudson’s Bay Company, announced Vancouver’s cosmopolitan aspirations. The gifts that came in the little blue Birks boxes were signs of sophistication in a city whose prosperity still depended on wood and fish.

Imagine, then, the tumult that greeted the decision by the Birks family to tear the entire edifice down. It was simply as business decision, the Birks family announced (although it is said that the family was bitterly divided by the decision). Those who knew the old corner still shake their heads at the replacement — a tower and a squat corner retailer, currently a glaring London Drugs outlet.

If there is any consolation, the demolition of Birks mobilized the architectural preservation community, ensuring the salvation of other heritage buildings in the city.