"Gassy" Jack Deighton for whom Gastown Vancouver was named.

Jack Deighton was born in Hull, England, in 1830, but he left early to sail on clipper ships to the far corners of the world. His adventures at sea and in the gold fields ultimately led him to New Westminster, where he bought the Globe Saloon. He was right in his element, bending the ears of the patrons with his stories with such gusto that he earned the name Gassy Jack, back when “gassy” denoted loquaciousness, not indigestion.

But he made the mistake of leaving the saloon under the supervision of an American while he took the waters of Harrison Hot Springs. The American celebrated the Fourth of July by emptying the till to buy fireworks and treating all to drinks on the house. Jack returned to bankruptcy.

So Jack and his wife, her mother and her cousin William paddled off to the Burrard Inlet, landing near Stamp’s Mill. As soon as they put ashore, Deighton offered mill workers all the whisky they could drink in exchange for labour. Twenty-four hours later, a new Globe Saloon was sitting at what is now Water and Carrall Streets. In time, that first bar would be replaced with the more commodious Deighton Hotel, with a veranda overlooking Maple Tree Square. The maple tree is gone now, but a statue of Gassy Jack graces the site on the southwest corner of the intersection. 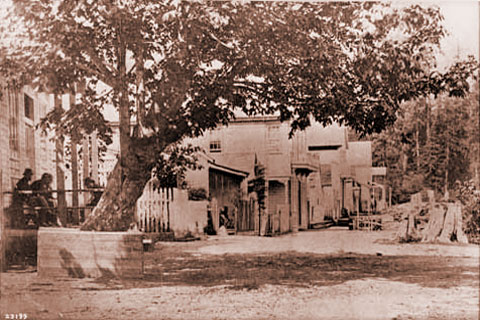 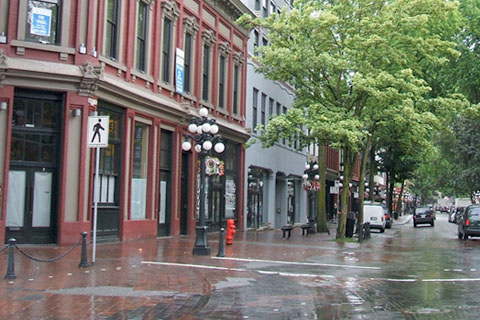 The Southwest corner of Water and Carrall, in Vancouver's Gastown.
PreviousNext

In no time, locals and even Admiralty charts were calling the settlement “Gastown,” even though it was officially named Granville. As Gastown grew, Deighton worked to provide police protection and other improvements. He died at 44, on May 29, 1875. Nothing remains of the Deighton Hotel, destroyed in the Great Fire of 1886, but Gastown still bears Jack’s name, and Vancouver fondly remembers its colourful founder.