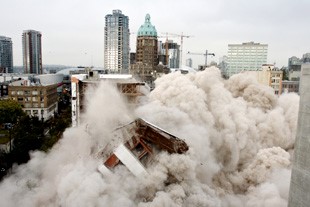 Part of the Woodward’s building was demolished in 2006 to make way for construction of the new high-rise. 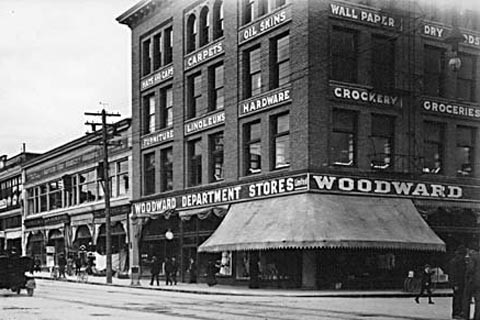 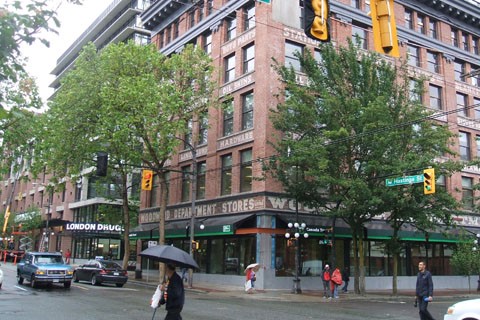 Charles Woodward had been a failure in his attempts to open stores in rural Ontario. But he went west in 1891 to establish a retailing dynasty that succeeded for 100 years through imaginative marketing and customer loyalty.

Woodward’s first small Vancouver store was at Georgia and Main Streets. Woodward was burdened with debt, struggled through a recession and, hardest still, lost his wife and two children to tuberculosis in the summer of 1892. But he did manage to raise money to buy a lot at Hastings and Abbott Streets at a bargain price — it was swamp eight feet below the surface, which the city drained for him — and built his four-story department store.

The store was a grand success, partly because of its famous Food Floor, the first self-serve food floor on the continent. In the days when grocery stores were small and crowded, this expansive emporium was a sensation. In 1910, the store had its first single-price sale: 25 Cents Day. The price rose over time — it’s best remembered as $1.49 Day, imprinted on the public mind with a catchy radio jingle. At Christmas, families from throughout the Vancouver region would go downtown to see the Woodward’s window displays, full of animated puppets and elaborate winter scenes.

Charles died in 1937. His son, William, nurtured the business through fat and lean years, opening stores throughout the west. But the business centre of Vancouver moved, the Downtown East Side fell on hard times, and competition from Eatons and the Bay took their tolls. In 1993, the flagship store closed its doors. For years, it languished, a symbol of urban decay, until it rose again as a new symbol of a more hopeful downtown redevelopment. The big red W is alight once more.