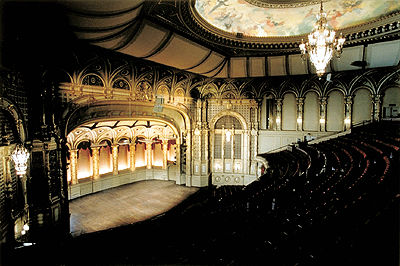 The original Vancouver Symphony, founded in Henry Green, gave its first performance on 26 January 1919. In 1929 the orchestra was revived by Allard de Ridder, who served as its music director from 1930 until 1940. It has been in continuous existence since then. During the 1930s the orchestra expanded its season, grew to 80 musicians, and began giving summer performances at the newly constructed Malkin Bowl. During this period the Vancouver Junior Symphony was formed.

A series of guest conductors led the orchestra from 1940 until Jacques Singer was appointed music director in 1947. During the 1940s the VSO began broadcasting its concerts on the radio, and soon the CBC was carrying its sounds to a large national audience. Singer was succeeded in 1952 by Irwin Hoffman, a protégé of Serge Koussevitzky. In 1959, the VSO presented the first Canadian Symposium on Canadian Contemporary Music, at which dozens of premieres took place, including works by Barbara PENTLAND and John WEINZWEIG.

In 1960 the VSO moved from its home in the Orpheum Theatre to the new Queen Elizabeth Theatre.

Hoffman remained music director until 1964, when Meredith Davies took over. Davies revitalized and rejuvenated the orchestra during his tenure, which lasted until 1971. Principal viola Simon Streatfield became the associate conductor until Kauyoshi Akiyama was appointed music director in 1972, at the age of 30. He held this position until 1985, when he was named conductor laureate. Under Akiyama's direction the orchestra made its first tour to Japan in 1974 and to the US in 1978. He presided over efforts to make the Orpheum the permanent home of the VSO, and on 2 April 1977 the orchestra presented its first concert in the historic, renovated Orpheum Theatre.

From 1985 to 1988 Rudolph Barshai served as music director. In 1987 the Canadian-born Peter McCoppin was appointed associate conductor, becoming music advisor for a two-year term beginning in 1988. In 1991 Maestro Sergiu Comissiona was appointed music director just in time to lead the orchestra on its third tour of Japan, where it performed as part of the opening ceremonies of the new Canadian embassy in Tokyo.

Maestro Comissiona has continued to maintain the VSO's commitment to Canadian composition, begun in 1959, through his active support of contemporary music. He has commissioned works from such BC composers as Jean COULTHARD and Peter Hannan, and has co-presented concerts with the Vancouver New Music Society, premiering many new works by Canadian and international composers. During the 1996-97 season, the VSO created a composer-in-residence position, which continues to be filled by Vancouver composer Rodney Sharman.

In March 1999 the VSO announced the appointments of Bramwell Tovey as its new music director and Andrey Boreyko as principal guest conductor, effective September 2000.