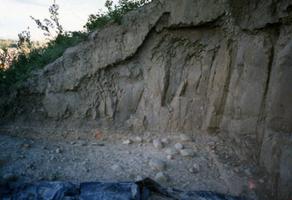 The Varsity Estates site on the north slope of the Bow Valley in west\r\nCalgary. Simple stone artifacts were found incorporated in a stony glacial\r\ntill that is about 13 000 years old (courtesy Alan L. Bryan).

The Varsity Estates archaeological site is located on a glacial till in the Bow River Valley of west Calgary, Alberta. In the early 1990s, the discovery of a biface and several refit flakes exposed in a cutbank and assumed to be deeply buried in late Pleistocene deposits led archaeologists to believe that the site was more than 20 000 years old.

Careful excavations of the site in 1996-97 led to the revision of the initial dating. No further evidence of bifacial flaking was recovered upon exposure of the late Pleistocene deposits. However, a number of other artifacts including cores, unifacial scrapers, choppers, and gravers were found in the upper part of the Bow Valley till, which had been deposited by a glacier from the mountains. Apparently, people had flaked old river cobbles they found in abundance on the surface of glacial ice and, as the ice melted, the artifacts were incorporated into the till. The artifact-bearing deposits were then covered by 23 m of sterile Glacial Lake Calgary deposits. These were created by the final melting of the great Laurentide ice sheet, which advanced from the northeast over east Calgary about 18 000 years ago, and disappeared from the area about 12 000 years ago. After this, the Bow River rapidly cut down to expose the old Bow Valley till where the archaeological site was found.

Unfortunately, it was not possible to date the artifacts. Geologists, however, could provide an estimate for the age of the geological deposits where they were found. It appears that Varsity Estates is at least 13 000 years old and is therefore one of the earliest known archaeological sites in Alberta.