View Royal, BC, incorporated as a town in 1988, population 9381 (2011c), 8768 (2006c). The Town of View Royal is located on the Esquimalt Peninsula, five kilometres west of the city of VICTORIA and bordering on Esquimalt Harbour. The name View Royal was invented by developers of a 1912 subdivision who advertised properties with views across Esquimalt Harbour toward the Royal Roads shipping anchorage. 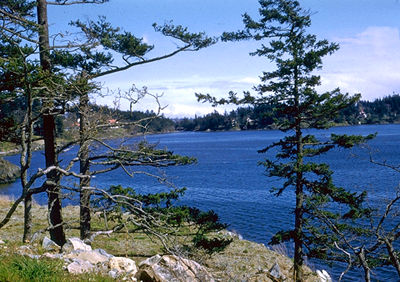 The Hudson's Bay Co (HBC) built a sawmill at a waterfall at the head of Esquimalt Harbour in 1848. Two years later HBC signed a treaty with the Kosampsom and in 1853 established Craigflower Farm, one of 4 farms established on VANCOUVER ISLAND. The Georgian-style farmhouse, now a provincial historic site, still dominates the eastern entrance to the town (see CRAIGFLOWER MANOR AND SCHOOLHOUSE). Many of the Scottish families that came over to work on the farm purchased other sections of land in the area. Early industrial sites of activity included lumber mills, lime kilns, brickworks and a railway work yard.

In recent years its population has increased along with the growth of Greater Victoria. Fox and dairy farms and market gardens have since been replaced by residential lots. It is now primarily a residential community, with most residents working in Victoria or other nearby centres like ESQUIMALT. A scenic stretch of the Galloping Goose hiking trail runs through the town along the abandoned Canadian National Railway right-of-way.