Vilhjalmur Stefansson, Arctic explorer, ethnologist, lecturer, writer (born 3 November 1879 in Arnes, MB; died 26 August 1962 in Hanover, New Hampshire). Over the course of three forays into the Arctic between 1906 and 1918, Vilhjalmur Stefansson, one of Canada's most renowned Arctic explorers, travelled more than 32,000 km by sled and dog team, and explored some of the world’s last uncharted territory. Of his explorations, the most well-known was the Canadian Arctic Expedition, which he led between 1913 and 1918. By the 1920s, Stefansson’s travels and writing had turned him into an internationally recognized personality, and he created more interest in the Arctic among Canadians than any other individual of his time. No stranger to controversy, Stefansson often had a polarizing effect on the public; supporters considered him a visionary genius and “prophet of the North,” while detractors labelled him a reckless and manipulative adventurer.

Shortly after his birth at Arnes, Manitoba in 1879, Vihjalmur Stefansson moved with his Icelandic parents to North Dakota in the United States. During his early adult years, Stefansson studied religion and anthropology at the universities of North Dakota, Iowa, and Harvard. In 1906, he accepted an invitation to participate in the expedition of Danish explorer Ejnar Mikkelsen and American geologist Ernest de Koven Leffingwell. This 1906-1907 expedition took him to the Western Arctic, where he studied the Inuvialuit of the Mackenzie Delta. Fascinated by the Arctic and its people, Stefansson then joined with zoologist Dr. Rudolph Martin Anderson to conduct ethnographical and scientific research from Point Barrow, Alaska, to the Coronation Gulf between 1908 and 1912.Near Dolphin and Union Strait, Stefansson encountered a little-known group of Inuinnait (Copper Inuit), whom he called the "Blond Eskimos." He sparked a controversy by suggesting that their lighter features could be the result of generations of intermingling with a Norse colony of Greenlanders that had vanished in the 15th century. His theory had no scientific foundation, and Stefansson faced criticism and accusations of sensationalism from the academic community.

During his 1908-1912 expedition, Stefansson hired an Inupiat guide, Natkusiak, and started a relationship with the Inuvialuit seamstress he had hired, Panigavluk (often referred to as “Fanny Pannigabluk”), with whom he had a son named Alec (many sources call him “Alex”). Stefansson relied on these individuals in order to travel effectively and do research in the Arctic, and learned from them how to dress properly for the weather, live off the land, and speak Inuktitut. Stefansson wanted to prove that an Arctic expedition could be sustained by the local resources of the land and sea — something he demonstrated with some success during his command of the Canadian Arctic Expedition (1913-1918). During the CAE, Stefansson and the expedition’s Northern Party outlined the edge of Canada’s continental shelf and discovered some of the world's last major landmasses — Lougheed, Borden, Mackenzie King, Meighen and Brock islands — while drifting dangerously, but deliberately, on ice floes. Despite these successes, the venture was fraught with internal dissension, and many of its members openly questioned Stefansson’s leadership and planning. Critiques were amplified by the sinking of the CAE’s flagship, Karluk, which resulted in the deaths of 11 expedition members, and by the deaths of six more individuals over the course of the rest of the expedition.

Vilhjalmur Stefansson was a brilliant publicist and a prolific writer, and he strived to use his position to shape people’s perceptions of the Arctic. His most famous book, The Friendly Arctic (1921), had a simple message: the Arctic was not a bleak, frozen wasteland, but a habitable region that must be developed. “It is human nature to undervalue whatever lands are distant and to consider disagreeable whatever is different,” Stefansson asserted. “It is chiefly our unwillingness to change our minds which prevents the North from changing into a country to be used and lived in just like the rest of the world.” To spur on the region’s development, Stefansson presented the Arctic Ocean as a militarily and commercially strategic “Polar Mediterranean” that, if controlled and exploited by Canada, could make the country one of the great powers of the 20th century.

Arctic Missteps and Move to the United States

In 1921, after he had failed to secure government support for another official Arctic expedition, Vilhjalmur Stefansson dispatched a small private party to colonize and claim Wrangel Island, north of Siberia, as Canadian territory. This generated an international incident that aggravated tensions between the USSR and the US, and embarrassed Great Britain, whose government denied any support of the mission. The Canadian government was infuriated, seeing his action as high-handed and threatening to Canada's claims to the Arctic Archipelago. When four out of the five members of the occupation party perished, including a young Canadian student, Stefansson became the target of much public criticism for sending the ill-prepared group to the island. His reputation only worsened between 1921 and 1925 when his poorly planned scheme for the domestication of reindeer (imported from Norway) on Baffin Island resulted in chaos.

By the mid-1920s, many Canadians perceived Stefansson as a troublemaker whose ideas and presence were unwelcome. He spent the rest of his life in the United States, where he continued to be regarded as one of the world's foremost Arctic experts. He advised the U.S. government and military from time to time, served as president of the Explorers Club, worked to establish an Arctic Institute at Dartmouth College and, in 1941, married Evelyn Schwartz Baird. The advent of the Cold War, combined with allegations that Stefansson had communist inclinations, brought about the cancellation of the ambitious 20-volume Encyclopedia Arctica he had been preparing with the support of the U.S. Navy.

During his last years, Stefansson continued to work at Dartmouth while he completed his autobiography, Discovery. Vilhjalmur Stefansson died of a stroke on 26 August 1962, at the age of 82. 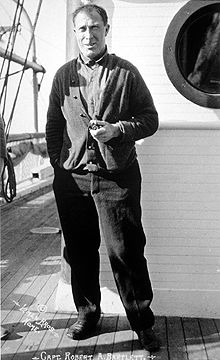