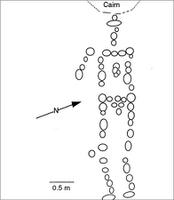 The Ward Effigy Archaeological Site (Borden No. EfPf-16) is located immediately north of the Siksika Nation reserve, about 100 km east of Calgary, Alberta. It consists of a boulder outline effigy representing a male human. The effigy is oriented with the head pointing approximately west. The head, signified by two rocks and supported by a neck consisting of three rocks, faces roughly south. A hollow rectangular arrangement of rocks forms the torso with four central rocks possibly representing the heart. A line of six rocks to the right of the figure may signify the upper portion of the right arm but there is no direct contact between the line and the figure. Both legs are slightly flexed and represented with the feet oriented to the right (roughly south). An arrangement of three rocks between the legs corresponds to a penis and testes.

The Ward Effigy is one of 14 known or probable male boulder outline figures on the Canadian and American plains--eight examples are known or suspected in Alberta, three in Montana, one in western Saskatchewan, one in northwestern North Dakota, and one in northwestern Kansas. These figures are known collectively as Napi figures and, in Alberta at least, are commonly associated with Blackfoot groups. Napi is a Blackfoot creation figure who appears prominently in stories concerning the creation or reforming of certain landscape features in southern Alberta. The Napi figures in Alberta are held to represent locations at which Napi laid down to rest during his journey through the area.

According to elder Steven Red Old Man, Napi once travelled from a place now known as Gem in southern Alberta, westwards to the Crowfoot Ferry on the Bow River, and then onto the hill where the Ward Effigy is located; his trip ended at what is now Okotoks about 20 km south of Calgary, where he was stopped by a big rock. At each place he rested during his journey, Napi laid out his form in stones to mark his route and what he considered to be his territory. In the Blackfoot language, the story of Napi's travels is known as, "No wak tse mas si," which means "borderline." This delimiting of his territory was therefore a way for Napi to let other people know they should not intrude upon it.

Napi figures are generally thought to have been created during the late precontact period on the Canadian Plains (roughly the period between 2000 years ago and 1750 AD). It has been suggested that these figures may be associated with the larger ceremonial tradition of plains Rock art: a late precontact period manifestation that seems to have been concerned primarily with exploring relationships between the people and the world of spirits, perhaps as part of ceremonial and ritual performances.